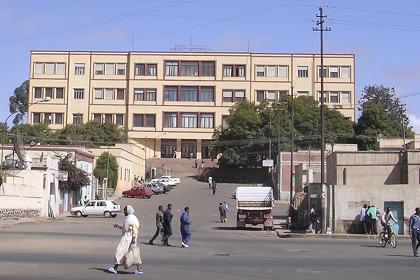 In 1993, two years after the liberation of Eritrea, 35 Academics of the University of Asmara (a third of the total academic staff at the time) were dismissed from their academic positions by the Government of Eritrea. This occurred at a time when the honeymoon of Eritrea’s liberation was at its peak, a stark difference than what we are exposed to now. This is brief and focused account by first-hand victims of this tragic action to set the record straight to that given by Dr. Mohamed Kheir Omer at his publicly visible facebook page: https://www.facebook.com/mkomer2?fref=ts , posted 1st June 2014).

Firstly, we understand that this is not the right time to argue one another over an issue of less a priority in light of the national emergency right now. At the same time we didn’t want to ignore Dr Mohammed Kheir’s misleading message that strives to distort the facts while attempting to minimise his culpability. Nevertheless we would like to stress that we bear no ill will to him or others involved in this case, especially those who have since acknowledged the blunder and its costs to the new country and victims.

We categorically stress (1) the staff dismissal wasn’t based on academic appraisal, as he tried to present it, but it actually relates to previous conflict with university’s appointed President (2) the precursor of the conflict between most of the dismissed staff and the former president i.e. Ato Andeberhan Woldegiorghis was a simple case for democratic academic administration (3) the issue was latterly manipulated viciously and politicized to act as a pretext for dismissal of the staff, with character assassination in the public media and rumour mills.

In his article, Dr Mohamed Kheir openly testifies that he collaborated with the regime in the process and had made decisions that seriously affected the university and at large the country (and not least the lives of 35 academic staff). However it is not clear at all, why he has decided to raise this issue of injustice at this particular time. This is especially surprising as it appears he has been vocally opposing the same government in many other issues for over a decade.

Immediately after the liberation of Eritrea the few available instructors of the University of Asmara had to cope with the massive challenges of rebuilding the university with its meager resources. The rehabilitation task required courage and determination of its staff which all were happy to shoulder. All staff showed extraordinary willingness to carry heavy workloads, long hours of extraordinary committee engagements including sacrificing weekends and public holidays without a single complaint. They served the public, government and its newly appointed appointed President (Ato Andebrhan Woldeghiorghis) with genuine feeling of nationalism and full cooperation.

Taking into account the President’s lack of prior knowledge and experience in managing higher education institution, the Deans, Department Heads and other senior academics expressed their willingness to help and support in executing his responsibilities.  Especially the deans of the various faculties, through the Dean’s Council continuously were working to remedy mistakes he was making, while extending their advisory support unreservedly.

Unfortunately, the President was unwilling to work together and instead, pushed on establishing a one man authoritarian rule in the university. He wanted to control all major and minor activities from top to bottom abandoning the long time serving legislations of the University [all this is documented officially]. At the same time, the president saw the newly elected University of Asmara Teachers Association, as a dangerous competitor that would challenge his authority and thus started attacking directly and indirectly.  Some of the evident methods encouraged by the President to weaken  the Association and its supporters were: dividing the staff along regional and faith lines; favoring and disfavoring of ‘new’ and ‘old’ academic staff differently [to which Dr. Mohamed drifts into again]. Executers of this discord were recruited from among the academic staff and administration staff. He would subsequently, depose the democratically [according to the legislation] elected Deans and Department Heads and replaced them by hand-picked supporters, one of which was Dr. Mohammed Kheir Omar. After this point direct staff involvement and contribution in the election of their deans and department heads was abandoned, a practice not remedied ever since.

It was at this stage, Dr Mohammed Kheir played his major role. He stood behind the destructive mission of the President and worked hard to discredit the efforts of the Teachers Association of the university and blackmail its executive committee as well as those who support the ideals of the Association by spreading false accusations and information.  In so doing he was involved in circulating a petition condemning the Association and insisting on general staff to sign.

It eventually appears the university wasn’t going to be a silent subservient to the government (and its appointees) interference and a decision was to be made to remove its key staff. It is with this intention, the cover up committee of Academic Review was established, which was admittedly not as experienced as the staff it was appraising.

In his article, Dr Mohamed Kheir, admits his involvement in this committee’s decisions and admits the process was not transparent, and the staffs didn’t know the ground for their dismissal and didn’t get the chance to defend themselves. Nevertheless, it is with this guise, the removal of the vocal opponents of the existing administration was accomplished in September 1993. The University Teachers Association was also disbanded with 7 out of its 8 committee members dismissed.

We were compelled to write this response to correct misrepresentations which appear to seed confusion and could have ramifications to a future just and peaceful Eritrea. However we don’t want to dwell on the past and intend  not to say more, lest it distracts our society from more immediate and more important issues.

Note: The full details of this unhappy predicament and the two years struggle for academic rule of law within the university are well documented [with records of official correspondence available to an appropriate time in the future].

In the end, truth will always triumph.

The above article was contributed by: