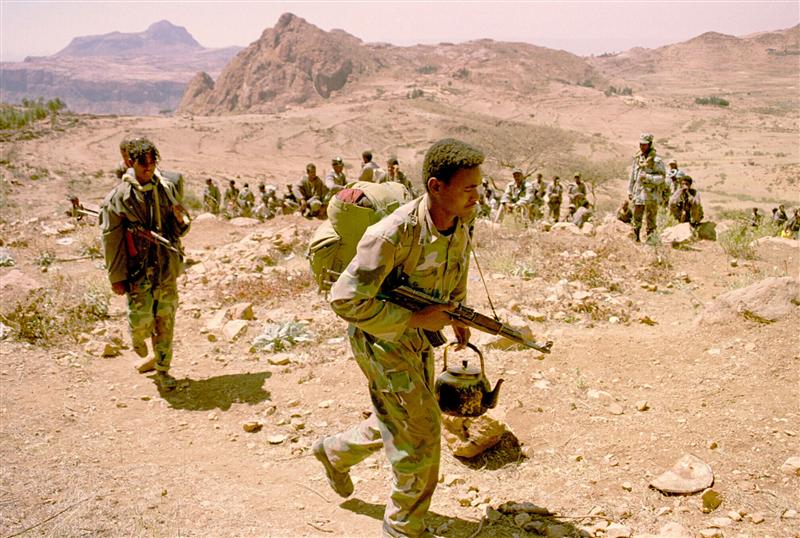 We Really Must Stop Isayas Afwerki’s Appetite for WAR Again

Say No to War

Let us not go to war again.

Let us not go to war, for Isayas Afwerki’s only language is war.

Let us not go to war because of Isayas’ acute hatred of TPLF leaders.

Let us preserve the lives of many at whatever cost, by avoiding war.

There would be no winning in war, there is only losing, at a cost that staggers every dimension on all sides – in lives, in money, and in the squandered opportunity to do anything better with our collective time and resources in this already beset region of Africa.

The 1998 Eritrean-Ethiopian war never was a border conflict, other than being driven by the self-ego and stubbornness of the leaders, which cost us dearly. Eritrea is under immense social, economic and political crises, above all the complete destruction of the social fabric of its society.

Back in 1998, if there was any room among the leaders for humility, compromise, understanding and honesty, we could have avoided the war and collectively worked together towards our economic recovery, and we could have reached a better political and social transformation by now. The people of these two countries were not lucky enough; the leaders often value self-ego over peace, stability and prosperity.

Eritreans and Ethiopians learnt enough about war and its devastating consequences, the war in 1998-2000 did nothing to solve the so-called border dispute, nor did it achieve any other advantages for the ruling parties except insecurity and more uncertainties.

Wikipedia, the free encyclopaedia, put it this way: “Eritrea and Ethiopia, two of the world’s poorest countries, spent hundreds of millions of dollars on the war and suffered tens of thousands of casualties as a direct consequence of the conflict. Only minor border changes resulted.” Yes indeed, the world’s poorest nations who cannot feed their own people purchased advanced weaponry, unleashed it on each other and destroyed the lives of many.

No matter what you achieve through war for that season, there is no way you can avoid coming back to the round table. After the heavy loss of lives of many young Eritreans and Ethiopians, both were forced to sit at the round table for the resolution. Still now, the border between the two countries has never been marked on the ground, the lives of both people never returned to normal and the leaders never satisfied their self-ego.

War is becoming an outdated means of human conflict resolution. However, we still have many leaders especially in Africa, like Isayas, who still believe war and war-like situations are the only way to maintain their survival in power. In order to quench or divert the attention of the people and the desire for political and democratic changes, dictatorial leaders often prefer war to avoid such pressures from their people.

If we revisit the last 29 years, Eritrea had diplomatic incidents and military confrontations with neighbouring Sudan, Yemen, and Ethiopia, and then with Djibouti. Isayas appeared arrogant, assertive, and uncooperative to negotiate and settle issues peacefully. His dependence on solving differences by military means has caused the country complete isolation, massive loss of life, and the destruction of its economy. This resulted in hopelessness among its people, added to the iron fist rule of his regime, leading to the drain of its work force. About half a million of its young people are now seeking refuge scattered everywhere in Ethiopia, Sudan, Libya, Egypt and basically all the world for their security, peace and survival.

The Eritrean and Ethiopian people know well the character and nature of Isayas, and how for the last 29 years his presence has disadvantaged the region. Even the 2018 peace agreement with Dr Abi was speculated by many politicians to be because he thought this would help him in decimating or eradicating the TPLF from Ethiopian politics. The TPLF in Ethiopia is like a massive mountain standing in front of him, blocking his deep-rooted agenda in Ethiopia as well as his iron fist tyranny in Eritrea. This frustration has led to Isayas’ immeasurable hatred towards the TPLF. This hatred against them also emanates from their role during the UN sanction on the Eritrean leadership and forcing him to be locked in the Adi Halo micro dam, isolated from the world. The other biggest headache for him was the TPLF’s role in exposing and discrediting his legacy in front of his supporters. During the 1998-2000 border war, he stubbornly said, “Even if the sun doesn’t rise, we will never withdraw from Badme,’ but on the ground Eritrea lost the war, and still Badme is under the control of Ethiopia.

Imagine for a second: do we go to war again because a person wants to unleash his hatred against certain groups and put the whole country and the whole region into chaos?

Recently assenna-tv broadcasted a leaked report from Eritrea. The report exposed the secret meeting of the Eritrean military officers of a possible war to drive out the TPLF from Badme and reclaim it. Their ill-fated assessment is that the TPLF would be cornered by the neighbouring local governments who are also at odds with Dr Abi, and therefore they believed the time is ripe to attack the TPLF.

If Dr Abi believes their assessment and is endorsing Isayas’ plan, I am afraid we will be heading towards an uncontrollable mess in the region. Is it not silly enough to assume attacking the TPLF would not mean inciting conflict to the whole of Ethiopia? The same assumption was also back in 1998 when they thought the TPLF would be left alone to defend the border.

Dr Abi, in his power, should not be entangled in Isayas’ hate basket; he should resolve the situation peacefully. He should never think weakening the TPLF or allowing them to be attacked by Isayas is a way to consolidate his power. This is going to be only madness.

I call also the good citizens of both countries; we must stand together and unequivocally and collectively voice our opposition to war, for any reason, between Eritreans and Ethiopians.

Some humble Eritreans may think of war as an option to return Badme to Eritrea, but let them think twice, it will never be the solution. Let us choose negotiation over war or conflict at all times.

We Eritreans should never go to war again, for whatever reason, and we have the responsibility and call to also convince those in the PFDJ camp of the consequences of war.

I also invite peace-loving Ethiopians, in particular those people in the north (the people of Tigray, Amhara and Afar) to stand with us in opposing any further conflicts.

Say no to war now.