Why is gloom and doom looming large on the horizon in Eritrea?  Why have Eritreans reduced themselves to live a meaningless existence under Isaias Afwerki after having fought epic battles that defined their country’s sovereignty? 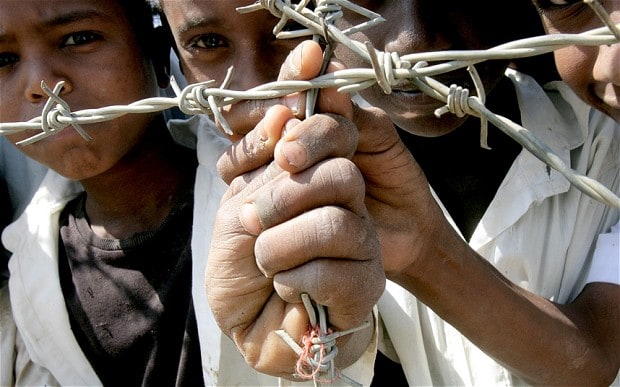 Why is gloom and doom looming large on the horizon in Eritrea?  Why have Eritreans reduced themselves to live a meaningless existence under Isaias Afwerki after having fought epic battles that defined their country’s sovereignty? Why have Eritreans allowed Isaias to walk all over them? The misery, isolation, stifling political atmosphere, despondency have so numbed the citizens they are simply sleepwalking through hell at the moment.  One can plainly watch the people shuffle away to mind their personal miseries as the president berates his imaginary enemies and blames others for the misfortunes the country sustained for 25 years under his autocratic rule. That is indeed a mystery! The young people of Eritrea will certainly solve that mystery in due course.

The country lost numerous opportunities to pick itself up and salvage odds and ends at various incidents since independence, including the inexplicable Badme war of1998.  Instead, the government led the country into humiliating experiences such as isolationism that ushered in economic decline, rise of poverty and hardship in rural and urban areas, upsurge in its young people taking flight, suppression of religious and social institutions and more. The country has turned into a land of purges and unjust confinement. Moreover, it has turned into a land that is paralysed with fear and paranoia.  Literally, the last 25 years have gone down the drain.  All that because of one man!  And yet, the president continues to mislead the public, rather in jest, that he has managed to keep the country together in face of persistent adversities.

Without doubt, the public realises now Isaias’ disingenuous speeches and engineered interviews are all theatrics – year in, year out.   They have learned to disregard all those spurious acts. Besides, they are too preoccupied in dealing with their miserable existence.  They ignore him when he launches into long-winded monologues regarding the state Eritrea is in.  The knowledgeable are aware of the fact that he utilises those periodic monologues to impress the exhausted people of Eritrea with falsehoods and hollow arguments. However, he cannot tell that nonsense to a mother who lost her first child during the armed struggle, lost her second during the Badme war, and then lost her third who was trafficked out of the country.

It is bizarre that the president’s views and actions are very much influenced by what goes on in Ethiopia. As far as he is concerned, Ethiopia is the reason why Eritrea is left behind.  In other words, his paranoia is so acute the country is literally being led by the politics of envy.  It is sad to bear witness that Eritrea, due to its self-inflicted paranoia, cannot compete with Ethiopia on the international, continental and regional stages at this very moment.  And yet, the president is too busy keeping an eye on Ethiopia while Eritrea is being pulled to pieces. So much so the young have chosen to flee the country and live a life of a refugee in Ethiopia, the country of his obsession. That is how much damage Isaias has caused to the country; not only physically but also psychologically.

What is being argued here is that the president has brought shame to the country and it begs the question, ‘where are yesterday’s heroes?’  We can concatenate the question with more open-ended questions.  Why are they allowing the country to bleed to death?  Why have they allowed themselves to die a slow death as they witness utter hardship unfolding under their very noses?  Why are they deflecting the full force of the government’s blows by adroitly moving from side to side as the public bears the major brunt of the president’s cruelty?  Once they were the protagonists who led heroic feats that pushed the enemy out of the country.  Where are they now?  They know the human sacrifices they paid to free Eritrea were so much one could easily get lost in one’s own history.  We make no attempt to unknot those question in this brief editorial.

Eritrea is portrayed as a country ruled by a president who has surrounded himself by aging loyalists who do not dare to express their own opinions, a country awash with former combatants who are lost in yesterday’s glories, the general public bullied into submission, and its youth who are kept in check by endless national service chores.  Endless passages can be written on the ideological conformity that is imposed on the public, the human rights abuses perpetrated via falsehoods – the president’s amplification of imaginary adversaries, and the gestapo-tactics prevalent in public consciousness.  It is only a question of time that the president’s political theatrics will culminate in a critical mass that will eventually alter the political landscape of the country for good.

Eritreans, especially the youth, are not docile slaves or simple deserters as they are often portrayed by many analysts.  What we are witnessing now is that the youth, tired of the president’s theatrics, are taking major risks to leave their beloved country in masses on a daily basis. The UN estimates 5,000 youngsters flee Eritrea every month. If this is not open dissension then what is?  Yes, for now that is their response to the president’s unrestrained escapades and recurrent deceptions that have kept them in perpetual servitude. The next stage will be different; nothing will stop them from taking matters into their own hands.