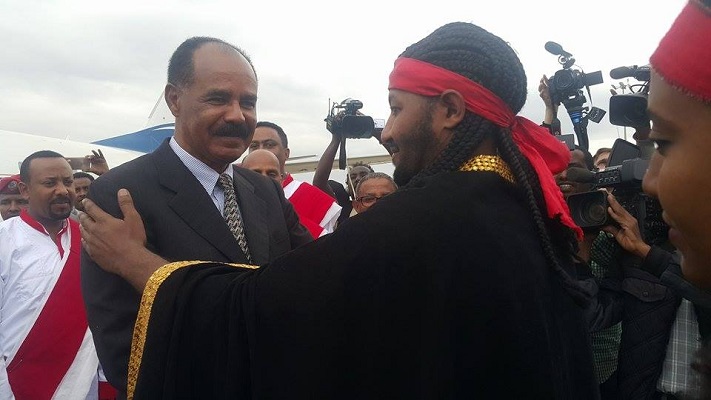 I AM NOT A MEMBER OF ANY GROUP. I only represent my myself with all the human defects with miniscule good traits. The following is my rumbling of hallucination. It is a FREE sanctuary that WE [ERITREANS] are lucky enough to be accepted and to enjoy liberty and freedom that we never had in our birth place – Eritrea. Alas, we are in the complexity in dealing with eighty – ninety odd political parties – with aged vanguards of yesterday, close to their end of era — trying to determined what we want, and how to achieve it.   Obviously, in one  hundred odd years [close to two hundred] we Eritreans are still struggling to determine what exactly we are searching for!!! It is a glaring example of self-deception. Pardon me, I am just practicing the NEW Liberty and Freedom of Expression that I am lucky enough to garner far, far, far away from my birth place, which was baptized (by a colonial force) as “ERITREA”.  If I am wrong, please correct me i.e. without tantrum, insults and cursing.

With the above preamble, let me go to my hallucination >>> Issayas Afewerki Abraha Miratch vs the People of Eritrea in Front of Judicial Eritrean Court .

2   Background of my Narration:

a)       Issayas Afewerki Abraha Mirarch is brought to Eritrean Court;

b)      The location of the court shall be in Asmara, Eritrea;

c)       The nine Judges in the court shall be Eritreans regardless of their gender and must be known for their judicial profession and/or acceptability in their villages;

g)       The language of the Court is primarily in Tigrigna but can be debated to satisfy the requirements of the nine provinces of Eritrea with their respective lingua franca from South to North and from East to West in the vast land of Eritrea;

h)      Interpretation would also be available in the Court in foreign languages that Eritrea is fully accustomed to, such as  Amharic, Arabic, English, Italian [listed here ONLY in alphabetical order].  Dear Readers, if you are offended that “Arabic” is listed as one of the foreign languages, I apologize and disappear from the Eritrean website, never to write again, as a punishment for my greatest sin on Earth;

i)        Finally, the Court must be dignified and respectable in manner of appearance and practical application to reflect the Pride of Eritrea and ultimately the Pride of the Continent of Africa.

Do you think the above scenario would happen in YOUR life time i.e. in the Eritrea that you know ever since you came to this world?  If you think that I am hallucinating, you would be 100% correct.  There is nothing else left for any Eritrean to say about Eritrea in Eritrea. The Eritrea that we had in our beautiful dream is “gone with the wind” (1) – as nothing remains for ever. And Eritrea has gone through its glorious course. If in doubt, ask one of the 10,000 (wild guess) [ten thousand] Eritrean Scholars of the Highest Order that graduated from world-renowned universities around the Globe [but excluding Eritrea itself!!! (2)]. Proportionately, it is very tempting to dare say that Eritrea is one of the most producer of university graduates on the surface of the Earth. It is a wild emotional guess. I can’t help it.

Without exaggeration, on the other hand, Eritreans (wherever they happened to land) were given proportional admiration for what they are. But, alas and mysteriously, that generally accepted fact cannot explain the seemingly inherent nature of Eritreans which seems to be an obstacle to the genuine dream of Eritreans to be FREE in a DEMCRATIC Country. In the entire history of Eritrea, when was the last time that “ERITREANS” enjoyed   self-controlled society with self-defined freedom, liberty, independence, justice, equality, productivity as a truly independent country? When?  Perhaps – and this is a wishful thinking — the Eritrean Scholars themselves can tell us – or write dissertation – chapter and verse, beautifully written and published in hard cover with impeccable language for 40 US Dollar a copy.  Other than that wishful thinking, it would be a dream to expect that Eritrean Scholars of the Highest Order of Education would get together and save Eritrea from the gutter of servitude under different colonizers – including, needless to say, indigenous ‘colonizers. Where do we go from here?  I don’t know.

4.  The future of Eritrea

No one knows for sure. Will Eritrea simply gravitate to its historical sanctuaries under outside/inside rulers?  Or will Eritrea, at last: a) examine itself deeply and honestly: b) daringly acknowledge its weakness; c) admit its own sociological age-old problems; and d) democratically willing to solve its age-old problems through indigenous democratic process by itself, for itself. Less than such a climate, Eritrea may revert back to its historically subservient position to outside/inside forces i.e. eternally dreaming for a dream that can not be defined. Luckily, our own Tigrigna, derivative of the ancient written language Geez, warns us of a saying for us to decipher: እንተዘይሞትክን፣ ጥዕና   አለክን ።

Once again, I honestly wish to thank www.archive.assenna.com for the invaluable opportunity to express my hallucination and confused views, as an Eritrean, regardless of differences of opinion with others. In a Democratic society [where Eritreans are longing for]  FREEDOM of EXPRESSION is part and parcel of Life. If we don’t believe and exercise that quality of Life, we might as well accept the continuation of our history and guided by others for eternity.

(2) Issaysa Afewerki Abraha, the darling of Eritrean 30-year Liberation War; the self-appointed President of Eritrea; closed the first and only university at Asmara, Eritrea, declaring that Eritrea does not need university and, instead, opening military recruitment centre to keep Eritrea under his full control. It is historical fact that Eritreans, shockingly including the glorious Freedom Fighters, accepted Issayas’ decision without a single opposition. It is historical MYTERIOUS phenomenon in the face of the Eritrean character and renowned gallantry.   THE END