The Maltese military has rescued 84 migrants from a dinghy floating adrift on rough seas, according to officials. The 77 men and seven women were found about 81 nautical miles off the south coast of Malta 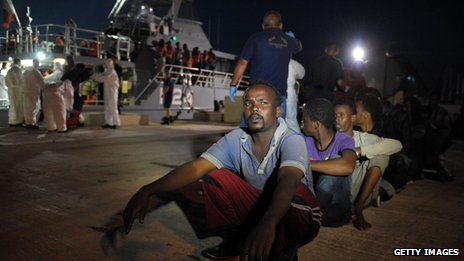 The Maltese military has rescued 84 migrants from a dinghy floating adrift on rough seas, according to officials.

The 77 men and seven women were found about 81 nautical miles off the south coast of Malta and brought ashore, the Armed Forces of Malta (AFM) said.

Thousands of migrants heading for Europe arrive in Malta and Italy each year, often on unseaworthy boats.

The Maltese government called on the European Union for assistance last month following an influx of people.

It also refused to allow a tanker which rescued 102 African migrants to dock in Malta in August, despite instructions from the European Commission that it had a duty to do so on humanitarian grounds.

Italy let the tanker moor off the Sicilian port of Syracuse instead.
Struggling

Local media said the latest group of arrivals in Malta was the first since more than 1,000 migrants arrived on the island in July, making it a record month.

A spokesman for the AFM said it became aware of the distressed boat at about 12.15 (10:00 GMT) on Monday. The AFM went to its assistance, finding it to be powerless and adrift in rough seas.

Its patrol boat brought the final passengers ashore at 09:00 (07:00 GMT) the next day. No-one was believed to be injured.

The migrants reportedly came from mostly African countries such as Nigeria and Eritrea, as well as Syria, according to Maltese media.

Meanwhile, a cargo ship named Celia picked up another 109 migrants – reportedly including women and children – after their boat was seen struggling in high seas some some 30 nautical miles from the north African coast.

It was believed to have left the Libyan city of Misrata and was heading for Castellon de la Plana in Spain before it got into trouble.

The cargo ship was instead travelling to Trapani in Sicily, where coast guards said it was due to arrive later on Tuesday, according to AFP news agency.