ERITREA’S MISSING $1 BILLION There is over 1 billion dollar missing from the revenue of the Bisha gold mine since 2011. Where did all that money go? Who is managing the nations finance and how? It 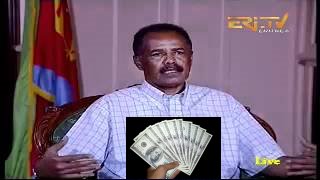 There is over 1 billion dollar missing from the revenue of the Bisha gold mine since 2011. Where did all that money go? Who is managing the nations finance and how? It is public finance but it seems it’s on the hands of few. Who is benefiting from the revenues of Eritrean mining boom apart from the few parasites?

Couple of years ago we were bamboozled by the PFDJ ruling party how life will change in Eritrea with the mining boom and how prosperous Eritrea will become…. In fact the regime was bragging about how Eritrea became one of the fastest growing economies of the world with 11 to 17 % growth showing since 2011.

According to figures published by the Canada-based mining company,  Nevsun recorded revenues of $548 million from its Eritrean gold heist operations in 2011 and around $400 million for the year of 2012 (Gold was slightly down). The total revenues accruing to the Government of Eritrea are unknown. However, under the terms of Nevsun’s contract, an estimated 14.1 tons of ore were transferred to the Eritrean authorities in 2011 and 2012, potentially representing over $900 million on sales alone. It’s all opaque but let’s takes Nevsun’s figures at face value for the sake examination.

The GoE earned over $900 million in cash flow from the Bisha gold mining in the last two years alone. It is a lot of money for any country live alone poor little Eritrea, where did it go? Who is responsible for managing of public finances?

Where on earth is all that money? There is almost 1billion dollar missing so far, so where did it go, on which bank is the cash stashed and by whom?

So again the GoE said Eritrea is registering 11% to 17% growth each year since 2011, the question is who is benefiting from the double digit economic growth? Poverty and hardship has been worsening in Eritrea while the economy was and is seemingly growing by huge double digit percentages. IT IS ABSURED!

All we hear and see now days is lack of everything in Eritrea; lack of food and water, lack of health services and supply of medicine, lack of energy, lack of information and education…Almost every essential and nonessential item is under rationing in Eritrea; with birthing air as the only exception that is not rationed yet, may be even that will be rationed in the future, the way the country is going nothing would surprise me anymore.

There are many individuals and groups under the Government of Eritrea’s payroll. One of them is off course Dr. Berhanu Nega the chairman of the Ethiopian opposition group Ginbot 7 who recently admitted on record to have over $500,000 budget allocated to his organisation by the so called government of Eritrea. The UN monitoring group on Eritrea and Somalia has also documented many groups and individual directly or indirectly supported by Eritrea. Please check references 1, 2 and 3.

How low can Eritrea stoop? Well our corrupt rulers just showed us how low they are prepared to stoop; very, very low indeed.  Just look at the “smuggling and trafficking business” orchestrated by non-other than the so called GoE. The evidence is overwhelming and undeniable. In unprecedented scale, they are in the “business” of kidnapping and smuggling of Eritreans with all their limbs tainted in blood.

“If you check all those PFDJ companies are licensed with individual’s name which allows them have complete grip of the finance and monopoly of every firm in the country. So whether you name it Seghen Construction Company, Red sea, Bisha, Shipping, GEDEC, Harena boat assembly, and many more to about 78 in number. Each manager is allowed to deal with their companies in full authority to personalize their power and even to level of putting their money abroad.So the collection of Eritrean resources by PFDJ appointed individuals has been going on for decades and its impact will be crystal clear when DIA is removed.” Wed Fayd

Parasite Isaias Afewerki (PIA) did work hard; he worked hard not for you or anybody else but for himself.  Whatever his motivations are he is an evil genius and we have to recognize that reality. Currently as I write this article PIA is the self-made head of the nation, head of the church, mosque, and chief justice.  He literally controls all the companies that somehow are still running as well as off course every soul living inside his state. So that is an absolute corruption for you, it can NOT get any worse than this, it’s a complete takeover and absolute power and corruption.

Not everybody is under ration or in poverty in Eritrea; the majority are under extreme poverty line but few blood sucking parasitic individuals or cliques are living life of riches and extravaganza, you may not see it with your own eyes for now but trust me they are living lavish life style at the expense the rest of us. While our children, brother and sisters work slavishly with no pay and zero human right, those parasites are living on the blood and sweet of our people.

Inherently corrupt system cannot fight corruption it is impossible. Corrupt systems fighting corruption is like criminals enforcing laws that will put them in jail, it’s unheard of.

Our people are considered resource that can be exploited at any given time for any purpose. They work for free; they have no rights what so ever, they are treated like slaves because they are slaves according to the head slave master and parasite Isaias Afewerki.

To oppose corruption in government is the highest obligation of patriotism. It is duty of the youth to challenge corruption, to fight corruption and eradicate corruption.

There is no legal government in Eritrea but an illegal mafia organisation sucking the blood out of our nation. Just because they claim to be authority and dressed like authority does not make them an authority. They have no legal bases to be authority; they are simply bunch of parasitic criminals dressed in smart closing for the sole purpose of power.