Eritrean Campaign Successfully Highlighted the Concern over the Indefinit National service in Eritrea at the UN Human Rights Council’s 26th Session. (Geneva 20-06-2014) Campaigners from across Europe held a protest vigil outside the UN’s Geneva headquarters 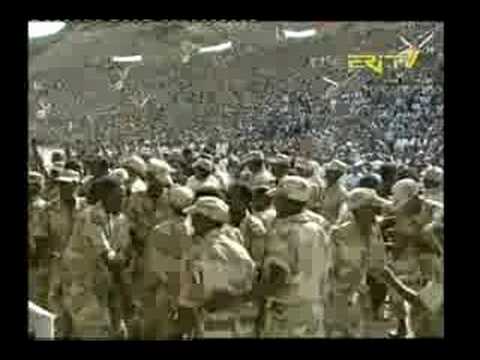 (Geneva 20-06-2014) Campaigners from across Europe held a protest vigil outside the UN’s Geneva headquarters as the report on Eritrea’s Universal Periodic Review into human rights was being considered. Echoing the calls that were being made inside the meeting by their colleagues from the different human rights organisations the protestors called for a UN Commission enquiry into the devastating human rights violations that continue to be perpetrated by the regime in Eritrea.

The protest was organised by the Stop National Service Slavery Campaign, as a culmination of their six months campaign to highlight the barbaric nature of Eritrea’s national service. The campaign’s main objective was ensuring that the Global Body considers, the indefinite national service in all its discussions into human rights in Eritrea. To this end the Group successfully, lobbied both the special rapporteur into human rights in Eritrea and the various permanent missions in Geneva for six months. In the week leading upto the protest vigil the Campaign held a side event where, four young activists and former recruits as well as academics and professionals with vast knowledge made their case before a packed audience at the palais de nations.

Representatives of many countries outlined their concerns over the indefinite national service, the recruitment of children as well as the use of forced labour, these were all issues highlighted by the campaign. Many major NGOs such as Amnesty International, Human Rights Watch, Human rights defenders and UN Watch highlighted the abusive nature of the Indefinite national service as being a major driver fuelling Eritrea’s refugee crisis. Speaking about the success of the campaign organaisers said, ‘ we are satisfied both with the outcome of the campaign and the reception that we had from our own people; the vigil attracted a wide cross sector of our community coming from many parts of Switzerland as well the rest of Europe ‘.

Campaigners made positive impression both with diplomats and members of the UN commission and NGO’s, who appreciated their presence as well as the efficiency of their campaign. Ms sheila B Keetharuth the Special Rapporteur on the situation of human rights in Eritrea, commended the work of the campaign and the contribution made by former recruits in providing evidence of the plight faced by many. For their parts campaigners stated that they will continue to work relentlessly until they see an end to the slavery guised as national service in Eritrea and identified supporting the establishment of an Inquiry commission under proposal as their immediate priority .