Djibouti hands 267 Eritreans over to UNHCR 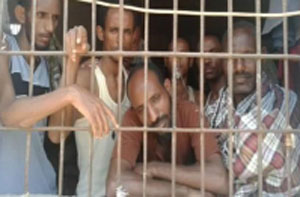 ADDIS ABABA — The Djiboutian government has handed 267 Eritreans, seized during a three-day border conflict in 2008, over to the UN refugee agency (UNHCR), presidential adviser Najib Ali Tahir said Monday.
“Some of them are military deserters and prisoners of the Djibouti-Eritrea war, which broke out on June 10, 2008,” Tahir told Anadolu Agency.
Tahir said the Eritreans were technically under Djibouti’s protection, going on to note that “there are [another] 19 prisoners of war (POWs) temporarily under our protection.”
“We have made them talk to the International Committee of the Red Cross (ICRC) to facilitate their return to their country, and we’re doing this despite the fact that we never heard of Djibouti’s POWs,” Tahir said.
U.N. Special Envoy to the African Union Ambassador Haile Menkerios welcomed the announcement.
“Eritreans and Djiboutians are brotherly people,” Menkerios  told Anadolu Agency via phone. “No political tension between the governments of the two countries should affect the peoples.”
Djibouti and neighboring Eritrea have twice engaged in border conflicts. In April 1996, they almost went to war after a Djiboutian official accused Eritrea of shelling the town of Ras Doumeira.
Three years later in 1999, Eritrea accused Djibouti of siding with its longstanding rival, Ethiopia, while Djibouti counter-accused Eritrea of supporting rebels fighting against its government.
As a result, Djibouti recalled its ambassador and broke off relations with Eritrea, which weren’t fully restored until 2001.
The two countries clashed again for three days in June of 2008, leading to another deterioration of ties and a U.N. embargo on Eritrea.
Copyright © 2014 Anadolu Agency
Source: http://www.turkishpress.com/news/400347/