Zimbabwe's war veterans' association, which has played a key and sometimes violent role in supporting President Robert Mugabe, has released a statement withdrawing its backing for him. It accuses Mr Mugabe of dictatorial tendencies, egocentrism and 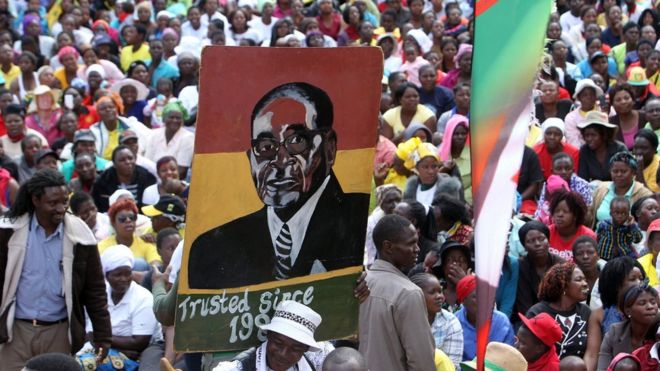 Zimbabwe’s war veterans’ association, which has played a key and sometimes violent role in supporting President Robert Mugabe, has released a statement withdrawing its backing for him.

It accuses Mr Mugabe of dictatorial tendencies, egocentrism and misrule.

It was not immediately clear if all of the war veterans agreed with the text.

Pressure on Mr Mugabe, 92, is growing, with factions in the governing Zanu-PF party openly fighting to succeed him and protests about the failing economy.

But he has said he plans to run for president again in 2018 and rule until he dies.

BBC World Service Africa editor James Copnall says that even in the most difficult moments of his 36 years in power, Mr Mugabe could always rely on the war veterans – his former comrades in Zimbabwe’s liberation struggle in the 1970s.

They were loyal supporters who sometimes provided him the muscle for political violence, our correspondent adds, so this development will be quite a blow.

“We note, with concern, shock and dismay, the systematic entrenchment of dictatorial tendencies, personified by the president and his cohorts, which have slowly devoured the values of the liberation struggle,” warned the statement released on Thursday after a meeting of representatives from across the country.

Sources told the BBC Zimbabwe analyst Lewis Machipisa that the statement reflected not only the views of some war veterans, but also senior military figures. Mr Mugabe relies heavily on the military to remain in power.

The statement said the veterans would not support Mr Mugabe’s re-election campaign, accusing him of abandoning them for the Zanu-PF’s youth league.

It also blamed Zimbabwe’s economic crisis on “bankrupt leadership”. Banks have run short of cash and the government struggles to pay civil servants.

“We are dismayed by the president’s tendency to indulge, in his usual vitriol against perceived enemies, including peaceful protesters, as well as war veterans, when the economy is on its knees,” the veterans’ association’s statement said. “He has a lot to answer for the serious plight of the national economy.”

Mr Mugabe responded to the anti-government protests earlier this week by telling the pastor who organised a nationwide strike, Evan Mawarire, to leave Zimbabwe if he was unhappy with conditions there.

Pastor Mawarire was arrested last week, but was released after a court threw out the charges of subversion against him.

He subsequently left Zimbabwe for South Africa, where he told the BBC on Thursday that he was more scared of his daughters’ criticism of inaction than what the state could do to him if he returned.