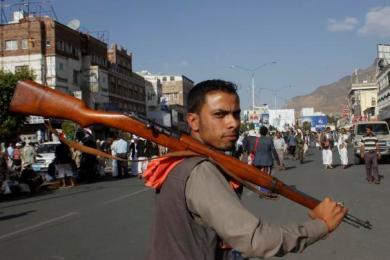 A Houthi Shiite rebel carries his weapon as he joins others to protest against Saudi-led airstrikes at a rally in Sanaa, Yemen on 1 April 2015 (Photo: AP/Hani Mohamed)

Ibrahim Haron, leader of the armed opposition group told Sudan Tribune that Houthi forces stationed in the island of Hanish and Zagar have also attacked the headquarters of the Eritrean naval forces in Assab by firing mortar rockets thereby causing a serious damage.

The attack comes days after reports disclosed that Saudi Arabia has transferred some 5,000 Yemeni militants to Eritrea for military exercise in the Red Sea country.

According to the reports, Riyadh is transferring the militants from Aden to Eritrea’s Assab port to go under military trainings and then be sent to the Saudi provinces bordering Yemen to back the Saudi led war in Yemen.

Ibrahim said Eritrea government motive to cooperate with the Saudi-led coalition is because Asmara has a long standing border dispute with Yemen.

The countries had previously engaged in a bitter war with Yemen over the disputed Islands of Hanish and Zagar.

He added that Eritrea had been serving as a base for military training for anti-Yemen groups in order to create destabilization and instability in Yemen and in the region at large.

“When the situation in Yemen changed and appeared new events and the emergence of coalition forces, Eritrea favoured the Arab coalition to ensure financial, political and military gains” Ibrahim told Sudan Tribune by telephone from the Eritrean-Ethiopian common border.

Meanwhile the Eritrean opposition group today alleged that an Eritrean Air force pilot has defected to Saudi Arabia by flying a military Aircraft.

According to opposition officials, the Eritrean pilot defected on Tuesday along with his two aides becoming the latest members of the Eritrean Air force to defect from the reclusive east African Sea nation.

The Captain pilot and two of his aides flew to Jizan region in south of the Kingdom of Saudi Arabia.

The defectors have asked for political asylum but it is not yet clear if the kingdom has grant them an asylum.

He says it is an apparent sign of growing discontent of the air force personnel and the military against the oppressive region.

In previous years, there have been defections in thousands from the Eritrean army, navy and air forces as the regime retains grip on power for over two-decades.

President Isaias has been in power since the country gained independence from Ethiopia in 1993.