What do they have in common? Presumptive leaders for Eritrea, Ethiopia and America

By Obo Arada Shawl alias Wolde Tewolde August 1, 2016 Foreword Why am I obsessed with would be leaders of Eritrea, Ethiopia and America (EEA)? It is for two simple reasons. One is that I am always curious 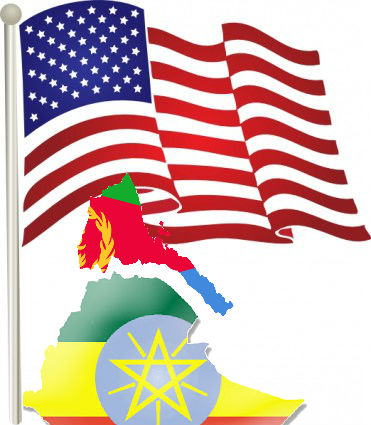 Why am I obsessed with would be leaders of Eritrea, Ethiopia and America (EEA)? It is for two simple reasons. One is that I am always curious with the question of why. Two, I am searching to become a citizen of my choice. So far I don’t have a citizenship of any country although I am eligible in the trio nations. Nothing fascinates me more than the concept of migration, emigration or immigration.

Culturally speaking, I have been trying to portray Eritrea as the key country to Africa. This is because Eritrea’s map resembles a metal key positioned at the door of Africa. Metaphorically though, it is a triangular nation sandwiched among giant cultures of the Saudis; the Sudanese and of the Ethiopians.

How did Eritrea come to have its location and position? The answer lies somewhere in between history, ethnic languages, culture and exploration. Eritrean history is very ancient going back to the Nubian and the Axumite Empires. Its current ethnicity is classified along ten languages of which one is without language. The culture of food, cloth, music and literature is diverse and traditional. Because of these cultural exploration, Eritrea has held political, economic and social positions among powers and superpowers.

But as to its geographical location, nobody knows how and when the geological formation of Eritrea has taken place. It is linked with Ethiopian physical geography. That is why perhaps many innocent and gullible people believe that there is no difference between Eritreans and Ethiopians. Of course, there will be none as they have lived in the past and are living in the present around the same environmental surroundings for millenia. As it is said time and again, ‘hu-man is a product of his environment’. Nowadays, the stars are included in our environment. Eathiopians though knew the astrological parts of the Heavens long before the Environmentalist came to exist. The Ethiopian calendar is a testimony to this phenomena. I was born during the thirteenth month known as Paquemen.

So what is the problem with Eritrea and Eritreans? The world is out there to talk about Eritrea for too long. The talk was not and is not about Eritreans but rather about Eritrea’s strategic location. Eritrea’s God given location can also influence the interests of the Arabs, the Europeans, the Americans and nowadays, the Chinese. It is a place where they can clash or compromise in as much as they do in Geneva, Switzerland.

The question arises, then how can the Eritreans handle all these international interests without the art of negotiation, the hallmark of a small but important nation. It is precisely for this reason that the Eritreans are the daily topic in world arena. I remember that one day, a homeless man arrived at a seven-11 store to buy a candy and he asked the store keeper where he came from. The Eritrean clerk told him that he came from Eritrea, the homeless quickly retorted that Eritrea has a nuclear bomb. The clerk was a bit shocked and told him in no uncertain terms that Eritrea does not possess the A-bomb. And the homeless said, “why then Eritrea is being sanctioned by the UN?

There is no answer. The policy of “silence is golden” SUK’T’Uum perpetuated by the ruling political party alias by President Isaias is outdated and or out of fashion. Eritrea cannot put Long fences let alone walls. Once upon a time, the Chinese have tried it, they abandoned it. The Russians did it in Berlin, it did not prevent people to cross. Mr. Trump may try it along Mexico and Canada but it may not work.

So what is to be done in the case of Eritreans? Why the Eritrean youth are crisscrossing the mountains, the deserts and the seas despite fences, walls and even killings? The answer is simple. No one can stop people from moving from one place to another, if they have a cause.

The policy of “SuK T’UM” meaning ‘silence is golden’ should be lifted. That is why I am proposing that Dr. Bereket H. Selassie should be a leader of the legislative body of the Assembly in Eritrea. He has the knowledge, the experience and above all the passion of God given kokeb. He is not a political leader. He could be a problem solver.

Despite a large number of accusers including myself, I gave him the benefit of the doubt whether he loves money or power. He has no passion for both. He has a passion for knowledge but he has no clue how to market or to transform it to the Eritreans and Ethiopians at large.

Let the political animals fight for power, they have the stamina and the God given passion for political power. Dr. Bereket is not one of them. He is a leader of a different kind that of a leader based on knowledge. Eritreans need such people.

What about Ethiopia and Ethiopians? Who is in charge? This is the question I always ask when I meet people. The answer I get is frustrating. They tell me, it is the Weyane. Who is Weyane? Again, they say they are the Tigran’s. Who are these Tigran’s, I again ask. I got another answer, they are the Shaebia of Eritrea and when I press on who the Shaebia’s, I am told they are the Adwa’s or the Agames.

What a circular and vicious answer. Do we know what a nation, a state or a country entails? I doubt so many people understand the difference or the similarities of these terms. Besides, the TPLF or its so-called Marxist-Leninist leaders have distorted the concept and the theory of nation-nationalities aka. B’Her & B’HereSeb. That was the first order of distortion and confusion imposed by the TPLF leaders on all Ethiopians. This has to be rectified if Ethiopia including Eritrea desire to progress forward. We should always delve into the root causes of the problem.

The real answer to my often asked question of “who is the leader of Ethiopia?” should be Haile Mariam Desalegne. As to his being a puppet of Weyane, it is a local issue. Nobody knows the facts on the ground or the leaders behind the scene. We have seen these secrecy and conspiracy practice when Aman Andom, Tefferi Bante and Menghistu H. Mrariam clashed up to death. It did not work then, it will not work now. But it will bring destruction and havoc if continue in secrecy and conspiracy.

The fate of Ethiopia, just like that of Eritrea lies along the interest of the international communities. Addis Ababa is their center, it is the current as well as the future of AU, EU, the Chinese, the Russians, the Americans and the United Nations. Where are the Ethiopians? Who represent them? The Tigrians, No. the Amhara’s, NO. The Oromo’s, No. the Debub Hizb, No the Afars, the Somalias and so on and so forth. The real answer is the Eathiopians. Who are these Eathiopians? They are all black and brown, they were all born free i.e. no question of Independence. Where are they going? What do they want? That is the core question to be answered.

That is where Hama Tuma comes to the picture. As I said before, Hama Tuma, in Oromo language means, killing the evil. Of course, by implication he should be a good man. The Hama Tuma, I know does not aspire to be a political leader but a leader of a different kind. That is the spokesman of DEMOCRACIA, the official organ of EPRP. Hama Tuma is an educator not a politician. He was/is in a Revolutionary mood. So far, Eat-hiopians are not in the art of politics including Hama Tuma. Real politics should involve government. Governments are formed when people come and live together. Eathiopia does not have civil government as portrayed by EPRDF. This so-called Federal – collection of nation-nationalities- is a fake federal structure imposed by foreign powers. For many Ethiopians, it is a continuation of the military DERG. This has to change by real people unlike Haile Mariam or those who are behind him.

Such alternative leaders come from real civilian population who may or may not have involved in the Ethiopian Revolution. In order this to happen, democracy should prevail. Individuals like Hama vs   Mersha; Kiflu vs. Fassika can lead the way from their own experiences to show Eathiopians how democracy is a messy operation. DEMOCRACIA is a tough concept not to mention politics. Millions of Ethiopian have perished for this concept and still are dying. Why? Because we are rejecting and neglecting people like Hama Tuma and embracing evil would be millionaires. It is a testimony that EPRP has set a high bar for the benefit of all Eritreans and Ethiopians in terms of political struggle. I believe EPRP’s next agenda is a struggle for values – economic, social and cultural.

My main reasons why I am putting America’s presidential campaign into the business of Eritrea and Ethiopia are the followings:-

Even though he is not a politician, I have put the name of Donald Trump as a potential political leader. I want to test the water of June in relations to Hama and Dr. Bereket. If Trump wins, then there is a possibility that such as Dr. Bereket and Hama can be trusted with winning the campaign of politics. That is the challenge I am putting to the Diaspora Community, especially those living in Washington Metropolitan cities. I am in the process of studying the nature of Eritrean and Ethiopian populace settling around Maryland, the District and Virginia.