[WAR VETERANS' COMMUNIQUE ON THE STATE OF ZIMBABWE'S ECONOMY, THE ZANU (PF) PARTY LEADERSHIP AND THE WAY FORWARD FOR THE PEOPLE OF ZIMBABWE (UNEDITED)] – ጽማቝ ትርጉም ብትግርኛ ዘጠቓለለ

There are problematic issues that have caused concern and restlessness to Zimbabwe's War Veterans. As a result, the War Veterans from the country's ten provinces, including all district chairpersons and representatives from all economic and other sectors, decided 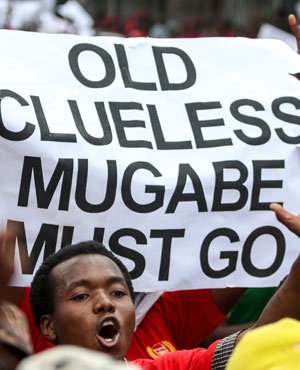 There are problematic issues that have caused concern and restlessness to

provinces, including all district chairpersons and representatives from all economic

and other sectors, decided to meet and deliberate on these issues, on this, the 21st

day of July 2016. Following that meeting, it has been unanimously resolved to issue

1. Recalling the ideals of the National Liberation Struggle in which the blood of the

departed heroes was shed in order to address the National question;

2. Reaffirming the Founding Provisions in Chapter 1of the Constitution of the

Republic of Zimbabwe, in particular Section 3 thereof, which enunciates the

supremacy of the Constitution; the rule of law; the fundamental human rights and

freedoms; good governance; as well as the entrenched recognition of, and respect for,

3. Remembering the heroic success of the national liberation struggle, culminating in

the birth of our Republic, the Republic of Zimbabwe, thereby igniting in our new

nation and people, hopes for a better life in the New Zimbabwe;

4. We, the surviving Veterans of the War of Liberation, secure in the historical

support that we cultivated selflessly among the broad masses of Zimbabwe, make

this statement, to spell out our disappointment, and those of the broad masses and

working people of Zimbabwe, at what is clearly ZANU (PF)&#39;s abhorable and poor

leadership, and to articulate the wishes of the broad masses, together with the

working people of this great country. The ZANU (PF) Party Leadership has dismally

failed to use the resounding mandate given to it in the 2013 general election, to

address the economic l&#39; problems that have beset our great nation since

5. We note, with concern, shock and dismay, the systematic entrenchment of

dictatorial tendencies, personified by the President and his cohorts, which I&quot; have

Constitution, as demonstrated by the following:

 The deliberate neglect and abandonment, by the Party President of the masses,

who are the foundation upon which the liberation war was fought and won, and

who have, thereby, become the bedrock of the Party. Suddenly, ideologically

bankrupt million man marches are being organized in honour of bankrupt

leadership! The same leadership has failed to address the bread and butter issues

 The systematic decimation of the party political structures through which the

 When Mr. Robert Gabriel Mugabe arrived in Mozambique, he walked in to join

those of us who were already armed and prosecuting the war as political soldiers.

He was not the President of the Party ZANU (PF), but we made him so, thinking

he was one of us. Our decision to make him the President of ZANU (PF) was

accepted here at home, regionally by the Frontline States, and internationally.

jailers, but because of our war effort. That is why, after his release, he joined us.

Yet, today, he refers to us as irrelevant! This depicts the President&#39;s lifetime

character of always manipulating situations, and delineating others from vantage

positions for his personal interests.

 None of the President&#39;s political colleagues in prison have benefitted from

Zimbabwe&#39;s independence the way he has, as he has put all his effort in sidelining

 The President&#39;s systematic elimination of those in the struggle&#39;s leadership in

Mozambique, and his continued outfoxing of colleagues in leadership after

independence up to this day, is unmistaken;

 The current situation, whereby the Party is fragmented with formations, so-called

factions, is clearly the President&#39;s project, again to outfox his peers in leadership;

party presidential position, each time he has felt threatened. Examples go a long

way to pre independence. However, recent examples are of interest, where the

Gamatox faction was created out of nowhere, its so-called members being charged

with all sorts of crimes, including treason. Then followed new creations, the

President&#39;s own G40 to look after his interests, and some Lacoste, a label of those

who might be in positions to challenge the President. Typical of this president, he

has mobilized those of his Gamatox nemesis to boost his G40 project, rewarding

them with all sorts of gifts, including ministerial posts, despite the charges

originally made against them.

After independence, the Party’s successes at elections have always been predicated

on our political campaigns. To date, the Party still remains strong in the rural areas,

His persecution, decimation and expulsion of War Veteran members from the Party

under his watch are legendary. From the days of the liberation struggle to date,

the demise of many a party member, on flimsy grounds. We say not anymore! Never

again shall we allow him such free reign.

As War Veterans, we are dismayed by the President&#39;s tendency to indulge, in his

usual vitriol against perceived enemies, including peaceful protesters, as well as War

Veterans, when the economy is on its knees. He has a lot to answer for the serious

plight of the national economy. His distaste and disregard of divergent views is

unfathomable and must be stopped. We are dedicated to stop this rot which he has

nursed over time, to everyone’s disgust.

The labeling of peaceful War Veterans as dissidents induces in us a sense of shock,

dismay and revulsion in light of the history of the 1980&#39;s. It will be recalled that our

only the Unity Accord pacified. Particularly worrisome in this context is the fact that,

whilst the man has dismissed that sad period as &quot;a moment of madness&quot;, such

language belies his insincerity in the Unity Accord. He should be extending an

honestly remorseful regret over this foul deed, yet he appears to extol this as some

macabre virtue. His continued resort to genocidal language should worry every right

thinking citizen as to his true nature. This is unacceptable to the memories of those

who perished during that time.

leadership should not be equated to fear. We do not subscribe to the idea of

unbridled exercise of power without consultation, where threats of genocidal

magnitude are made against us. He should be reminded that he remains the major

beneficiary of the National War effort at every stage including the Unity Accord. He

has used the privilege of leadership to build a patronage system around him, which

has turned into a personality cult. It therefore shocks us to the core that, gauging

from his recent statements, he now wishes to turn the present young generation

against us for his own continued personal aggrandizement.

The Land Reform Programme, which was a historical culmination of the valiant

liberation struggle, made more land available to the State. The President and his

hangers-on, to our utter dismay, now uses that land as reward for his foot soldiers,

who have become his personal mercenaries. These mercenaries, strangely, are

getting urban land as reward for destroying the War Veterans&#39; legacy and the Party

and, with it, the national heritage. We stand firm and resolute in the defence of that

legacy. The tragic consequences for the hare-brain decisions are there for the nation

His leadership has presided over unbridled corruption and down right

mismanagement of the economy, leading to national economic ruin for which the

effects are now felt throughout the land.

The lack of leadership manifests itself in the following examples: –

 Proliferation of land barons through systematic land-grabbing by those in

political functions to the detriment of the public purse and public welfare.

of the people, and private individual income. It is our sacred duty as the vanguard of

the people to speak out against these instances of maladministration and misrule.

This rot needs to be uprooted, and right now.

We noted with regret that when some of us peacefully gathered around Harare, the

leadership unashamedly and in humiliating fashion, tear-gassed and water-cannoned

us for no reason. Regrettably, the general citizenry has previously been subjected to

this inhuman and degrading treatment without a word of disapproval from us. That

time has passed. We wish to categorically condemn the brutal oppression of the

freedom of expression, whether as exercised by ourselves or by anyone else.

brutalise private citizens who share our desire to exercise our constitutionally

entrenched rights and freedoms. As the vanguard of the liberation struggle we

hold are agents of foreign powers or agents and therefore enemies of the State. This

notion, which to us is a diversionary tactic, contemptuously implies that

Zimbabweans lack the capacity to rationalize issues; think through their problems

and take decisive action against clear evidence of · misrule.

constitutionally bound to defend and uphold the Constitution, the rule of law and

defend the sovereignty of the Republic of Zimbabwe. We therefore condemn the use

their right to demonstrate against poor governance. We demand that those who

Zimbabwe. We further demand that the State and all its actors respect, promote,

protect and uphold our Constitution.

In view of the above, we the veterans of Zimbabwe’s war of liberation, together with

our toiling masses, hereby declare that, henceforth, in any forthcoming elections, will

population for his own personal aggrandizement and that of his cronies.