US State Department Press Release : “We have repeatedly expressed grave concern about the human rights situation in Eritrea, & that concern has been reinforced by the COI’s findings.” 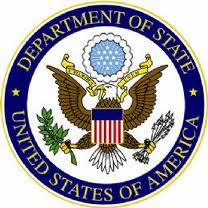 UN Commission of Inquiry on Eritrea

June 10, 2016
The United States takes note of the recently issued report by the UN Commission of Inquiry (COI) on Eritrea, in particular its conclusion that there are reasonable grounds to believe that crimes against humanity have been committed in Eritrea. We have repeatedly expressed grave concern about the human rights situation in Eritrea, and that concern has been reinforced by the COI’s findings.We strongly encourage the Government of Eritrea to engage fully with the international community and UN bodies to address the human rights situation. The Government’s willingness to work on several Universal Periodic Review recommendations is a step in the right direction. We also urge Eritrea to implement its constitution, hold national elections, honor its commitment to limit the duration of national service to 18 months, develop an independent and transparent judiciary, and release persons arbitrarily detained including political prisoners, journalists, and members of religious groups.

We continue to support international efforts to improve the protection of human rights and fundamental freedoms in Eritrea and will work to promote these efforts within the context of the upcoming Human Rights Council session.