By Tewelde Stephanos        Email: testifanos@gmail.com Ethiopia’s Prime Minister Abiy Ahmed has introduced an encouraging new tone the region needed badly. The steps he has taken to make peace with his own people – ending the state of emergency, 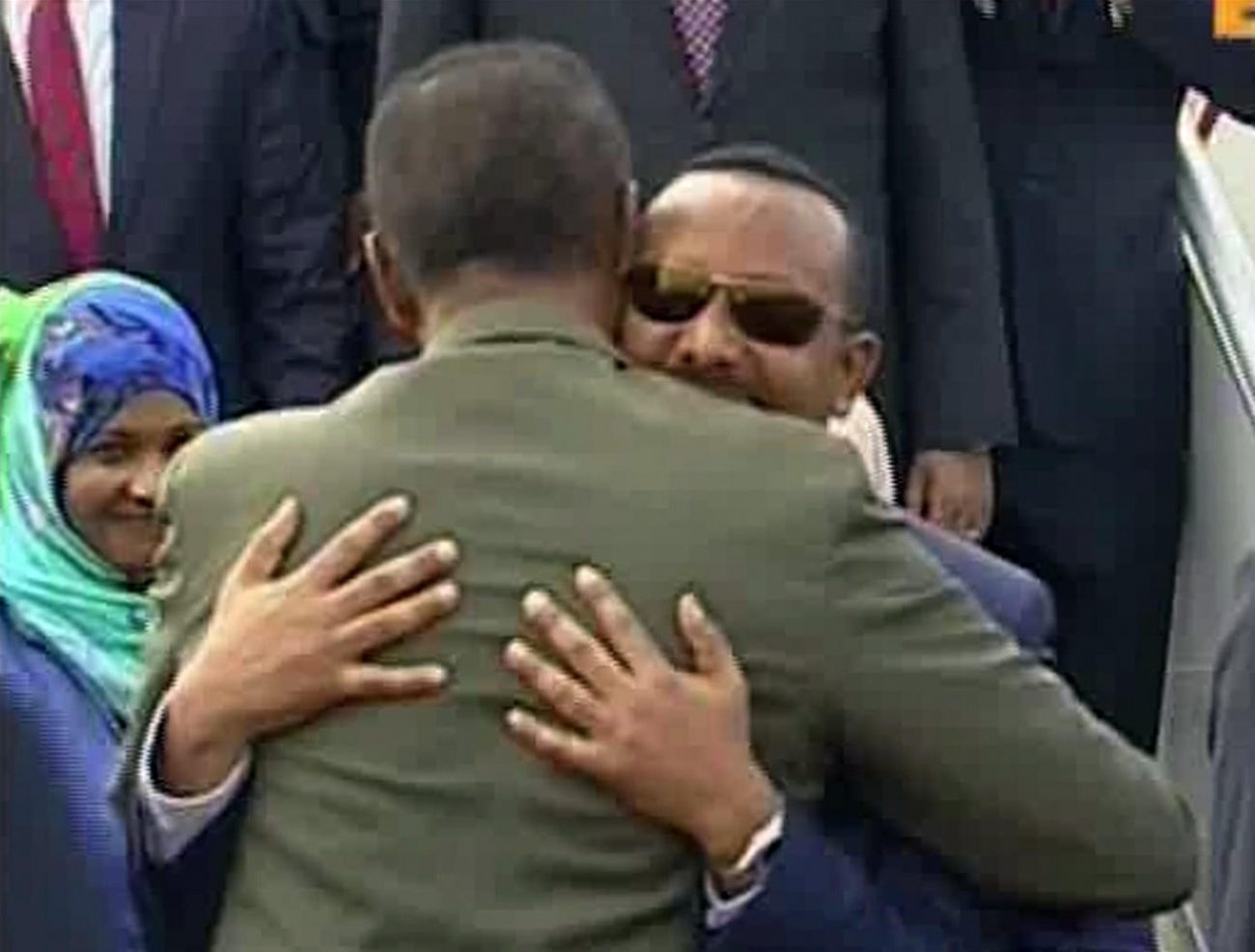 Ethiopia’s Prime Minister Abiy Ahmed has introduced an encouraging new tone the region needed badly. The steps he has taken to make peace with his own people – ending the state of emergency, closing prisons, allowing “competitor” political parties and private media to operate inside Ethiopia – are impressive by any standard. His apparent acceptance of term limits this early in his tenure vis-à-vis Africa’s history of nasty dictators, remains to be seen but is refreshing no less. Given his multi-ethnic and multi-religious backgrounds, Ethiopia is very lucky to have him emerge at this critical moment too.

But we need to be cautious as well because we have seen this movie before. Musevini was also 42 when he came to power. At the time he said “Africa’s problem was leaders who did not want to leave power”.  Still in power over three decades later, the transformation is complete: “Some people think that being in government for a long time is a bad thing. But the more you stay, the more you learn. I am now an expert in governance”.  The arrogance is appalling. Conveniently, those who run against him are jailed and harassed. He always “wins” the sham elections.

Like many Eritreans, I am glad PM Abiy took the bold step to end the border stalemate.  As a result, Ginbot7 was legitimized to operate in Ethiopia rendering its Eritrean presence obsolete. That is a good thing. Supposedly, Ginbot7 was fighting to bring democracy in Ethiopia. How it can claim democracy as its core value while turning a blind eye to the pain of millions of Eritreans enslaved by their mentor defies logic. God save us from such “democrats”.

IS PM ABIY THE NEW FACE OF GINBOT7?

Sadly, when it comes to the Eritrean people, the “demari” is not looking much better than Ginbot7. It is one thing to offer Isaias the respect diplomacy demands but quite another to act like a smitten teenager idolizing the one who personifies the exact opposite values he (Abiy) himself is setting in motion (http://asmarino.com/articles/articles-video/5105-2018-07-15-17-24-44). His enthusiastic embrace of a documented killer is what makes Abiy intriguing at this point.

Such callous display of idolatry can only diminish Abiy’s own stature and eventually tarnish his brand. If this new brand is truly values-driven, he cannot continue to be tone deaf to the suffering of the Eritrean people. The problem with populists is that they look good until they face a critical moment of truth. Yes, he is exciting and I am willing to give him multiple benefits of the doubt. But he has clearly failed his first compassion test, when it comes to the Eritrea people, by worshipping their oppressor like a god.

After all, as Ethiopia’s former security officer, PM Abiy is fully aware that Isaias is a murderer and Eritrea is nothing more than a slave colony.  It is admirable that he admitted his government committed terrorist acts on the Ethiopian people. After saying that, he can’t be blind to Isaias’s decades-long terrorism on the Eritrean people. And so far, demariw (the adder) is glorifying the criminal and subtracting the innocent victims. That can’t be good. Isaias is human and he will die soon. People live on and they remember. To be credible, PM Abiy must be consistent.

The insatiable narcissist that he is, Isaias is of course beside himself blowing kisses and clutching his heartless heart — a frigid heart that kills old and young routinely. Even 93 year old Haj Musa had to die in prison. Isaias runs Eritrea as his own personal property. Sadly, he has turned it into a prostitute nation in his own image, offering it and himself to the highest bidder. Eritrean passports were sold in Kuwait, Qatar and Libya had their day, he dabbled in diamond smuggling in Zaire, Iran and the Houthis were his buddies at one time, now he is killing them because the Saudi’s gave him more money, he was Egypt’s reliable lackey shamelessly running to Cairo to subvert Ethiopia’s agreements with upstream Nile water countries, Aseb is a foreign military base (who would have thought?). Of course, no one knows the terms of any of his dealings or what other deals Eritrea has been committed to. Some Eritrean islands are said to be Israeli listening posts, others nuclear waste dump sites. Now, Abiy will bring him even more money to deepen the oppression of the Eritrean people.

There is no problem Isaias can’t make worse. He started the 1998 war claiming Ethiopia killed a dozen or so Eritreans – a manageable problem he escalated to a devastating war. Did the dozen even exist? If so, who investigated the situation and who analyzed the information to assess what really happened? Did he setup the dozen or send his own killers to liquidate them? As is his normal practice, did he kill his previously assigned killers to empty the witness pool? And yet, some 100,000 Eritreans and Ethiopians lost their lives, billions of dollars were squandered on Ukrainian and Russian arms; all to avenge the deaths of people whose names we don’t even know.  Does anyone know?

The love fest with Abiy is a personal win for Isaias (it is always personal with him). Although the atmosphere is pregnant with peace, he is already busy sawing discord. His “game over” gloat directed at the TPLF is a clear indicator another game is in motion. Worryingly, the mass demonstrations supporting PM Abiy have underlying anti-Tigray biases; which will provide Isaias fuel for his fire.  Isaias has committed way too many crimes to make peace with his own people. And any arrangement that does not include the people of Eritrea and Tigray will not last. Therefore, lasting peace has no chance as long as Isaias is around. His record on this is long and clear. Dr.Abiy needs to keep his eyes on the ball (people first) before Isaias drags him down to his level.

IS THERE A WAY OUT FOR ERITREA?

With no evidence, Isaias accused the G15 of treason and his supporters cheered on. What would his supporters’ reaction have been, if four months ago, they saw Arbi Harnetdemonstrators chanting “tedemrenal, aand honenal”? As usual, the reaction would have been disgust and ridicule; that traitors want Eritrea to be Ethiopia’s 14th province again. Now that Isaias is behind this new mantra, hopefully his supporters are at least surprised.

The regime’s math gets even weirder. Osman went back to 1991 to say Eritrea’s 27 years were wasted (kesirna). Isaias did the same by going back to the referendum year of 1993 to say 25 years were wasted. But the “waste” started in 1998 and shouldn’t have lasted beyond 2000. Are they then saying Eritrean independence was unnecessary, especially vis-à-vis their new mantra of “tedemneral, aand honenal”? Or are they referring to the years since the EPRDF had been in power? In that case when they say “we”, they will be talking as Ethiopians. That would be odd unless Isaias has signed Eritrea off already. The only way Osman’s and Isaias’s statements would make sense is if they meant to say “we have made Eritrea’s independence meaningless by turning it into a slave colony where human life is the cheapest commodity in the land”.  But that would be honest and Isaias can never be accused of that.

Is there a way out? So far, both regime supporters and the opposition have been dismissive of each other, leaving the field wide open for Isaias to do whatever he pleases – singularly making all decisions with bullied and subservient messengers rushing to execute his orders. He has become the worst enemy Eritrea ever had and getting rid of him is the only way to freedom.

What is missing is a “bridge of love” (to borrow the spirit of the day) that can help people to think together. If the rotten top is discarded, PFDJ can be re-purposed to become an instrument of “democracy and justice”. It is the only entity, inside or outside of Eritrea, with usable organizational resources and experience. There is a good chance it can be a stabilizing force because if it is completely eliminated as was done with Baath party in Iraq, the resulting chaos that followed in Iraq and Libya can be Eritrea’s fate too.

The reason for this suggestion is two-fold. First, not many people heard of PM Abiy six months ago. Yet, here he is blazing away. So, with redirected focus and some luck, a few dynamic young people (men and women hopefully) in higdef’s deep belly and the diaspora could pop up to surprise us as PM Abiy did. Then PM Abiy can have true people-centered partnerswho can help transform the whole region to become a center of peace, hope and prosperity.

Second, Arbi Harnet has been looking for partners inside Eritrea. As a willing and able partner, it can create the necessary alliance with others joining quickly. The resulting big tent can be the inclusive transition team that many have been calling for. In the long term, the re-purposed higdef should not be a political party itself but it can be an incubator of viable party platforms and other ideas that are helpful to Eritrea’s future.