One of the United Nations’ top human rights experts says Switzerland had no good reason to crack down on Eritreans. François Crépeau, a Canadian lawyer who serves as the UN’s special rapporteur on the human rights 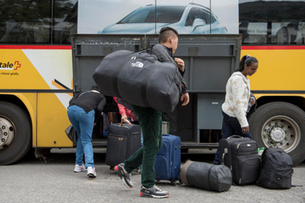 One of the United Nations’ top human rights experts says Switzerland had no good reason to crack down on Eritreans.

François Crépeau, a Canadian lawyer who serves as the UN’s special rapporteur on the human rights of migrants, lashed out at Switzerland’s recent decision to tighten its asylum policy towards Eritreans in an interview with two Swiss newspapers on Friday.

On February 2, the Federal Administrative Court said Switzerland would no longer recognise Eritreans as refugees solely on grounds of having fled their country illegally. Until last summer, leaving Eritrea illegally was considered a legitimate reason for asylum, since whoever did so faced up to five years in prison in Eritrea.

However, the court decided “the illegal exit [from Eritrea] cannot in itself justify recognition as a refugee”, pointing to recent cases of Eritreans returning safely for short home visits after gaining asylum status in Switzerland.

Crépeau, whose job involves investigating human rights violations and promoting sound policies globally, said in an interview with the Tages-Anzeiger and Berner Zeitung there was no evidence that someone returning to Eritrea would not face punishment.

“Switzerland must be certain, in every single case, that a return for an individual will not be problematic. This requires a mechanism that can check that after returning nothing indeed happens,” he said.

Crépeau said Switzerland was “pretty much on its own” on this issue and warned against tightening policy based on doubts. Instead, he concluded, the rule should be: if in doubt, err on the side of protection.

The Swiss government’s policy for processing asylum requests from Eritrean refugees is important because Eritreans make up the largest single nationality among asylum seekers in Switzerland: some 5,000 a year.