The Yemen Crisis and the Bab el-Mandeb Maritime Chokepoint 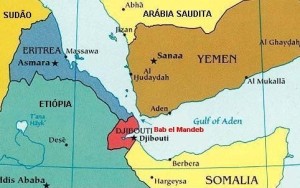 A U.S. Navy carrier strike group passed through the Suez Canal on April 6th shifting from the Sixth Fleet, the Mediterranean Sea, to the Fifth Fleet, the Central Command maritime domain — 2.5 million square miles of area including the Arabian Gulf, Gulf of Oman, North Arabian Sea, Gulf of Aden and the Red Sea. The Navy said the group includes the 100,000 ton, nuclear powered aircraft  carrier USS Theodore Roosevelt and scores of combat planes in its airwing, along with a guided missile cruiser and three guided missile destroyers — presumably armed with long range land attack cruise missiles. The strike group’s presence is part of a “long-standing commitment to stability and the free flow of commerce in the region” as the United States is increasingly involved in support of the Saudi-led campaign in Yemen as well as the anti-ISIS air campaign.

The deployment is typical for the U.S. military footprint in the area but it serves as a reminder about both stability and freedom of navigation. The ships’ ingress to the 5th Fleet means a transit of the Red Sea and the Strait of Bab el-Mandeb, a narrow chokepoint separating Eritrea and Djibouti on the west and Yemen on the east.

New questions about the security of that key narrow marine passage have arisen as Yemen descends into chaos from the Houthi militia advances and the response of a Saudi-led coalition military campaign. The conflict also presents opportunities for Yemen-based Al Qaeda in the Arabian Peninsula (AQAP) which has initiated attacks against Saudi Arabia and the United States despite robust counter terrorism efforts — now diluted by the withdrawal of American elements and the Houthi advances. Added to the potential threat matrix is the influence of Iran in the Houthi campaign and its long experience in holding the Strait of Hormuz, another strategic chokepoint, at risk.

So in addition to the crises within the country of  Yemen — military, political and humanitarian — resulting from the Houthi campaign, attention must be paid to the maritime domain. Yemen occupies a strategic location in the primary east-west sea route as noted by the head of US Central Command in 1990, General Norman Schwarzkopf. In testimony to the U.S. Senate he said, “The Red Sea, with the Suez Canal in the north and the Bab el-Mandeb in the south, is one of the most vital sea lines of communication and a critical shipping link between our Pacific and European allies … Since a significant part of USCENTCOM’s forces would deploy by sea, ensuring these waterways remain open to free world shipping must be a key objective.”

The importance and a description of the Bab el-Mandeb Strait was summarized in a report from the U.S. Energy Information Administration in November. It said in part:

The Bab el-Mandeb Strait is a chokepoint between the Horn of Africa and the Middle East, and it is a strategic link between the Mediterranean Sea and the Indian Ocean. The strait is located between Yemen, Djibouti, and Eritrea, and connects the Red Sea with the Gulf of Aden and the Arabian Sea. Most exports from the Persian Gulf that transit the Suez Canal and SUMED Pipeline also pass through Bab el-Mandeb.

An estimated 3.8 million bbl/d of crude oil and refined petroleum products flowed through this waterway in 2013 toward Europe, the United States, and Asia, an increase from 2.9 million bbl/d in 2009. Oil shipped through the strait decreased by almost one-third in 2009 because of the global economic downturn and the decline in northbound oil shipments to Europe. Northbound oil shipments increased through Bab el-Mandeb Strait in 2013, and more than half of the traffic, about 2.1 million bbl/d, moved northbound to the Suez Canal and SUMED Pipeline.

The Bab el-Mandeb Strait is 18 miles wide at its narrowest point, limiting tanker traffic to two 2-mile-wide channels for inbound and outbound shipments. Closure of the Bab el-Mandeb could keep tankers from the Persian Gulf from reaching the Suez Canal or SUMED Pipeline, diverting them around the southern tip of Africa, adding to transit time and cost. In addition, European and North African southbound oil flows could no longer take the most direct route to Asian markets via the Suez Canal and Bab el-Mandeb.

The threat was highlighted this month in a comprehensive analysis of the Yemen situation in a report by CSIS Arleigh Burke Chair in Strategy Anthony Cordesman. Writing in “The Changing Security Balance in the Gulf,” he noted:

[T]he growing ties between Yemen’s Houthi Shi’ites and Iran poses another threat to both Saudi Arabia and the US. It potentially could allow Iran to outflank the Gulf, and deploy air and naval forces into Yemen. This threat still seems limited, but it is important to note that Yemen’s territory and islands play a critical role in the security of another global chokepoint at the southeastern end of the Red Sea called the Bab el Mandab or “gate of tears.”

A threat to Bab el-Mandeb traffic could ultimately take many forms such as deployment of sea mines, harassment and interdiction by small patrol craft, and attacks by air based and land based weapon systems. The 1980’s Iran-Iraq War provided ample evidence of the disruptions to international commerce and freedom of navigation in the Persian Gulf by these methods, especially around the Hormuz Strait approaches during the so-called “Tanker War.” Selected merchant ships were routinely harassed and attacked by Iranian regular and Revolutionary Guard air and seaborne units. Persistent mining attempts were made against commercial and military vessels which led to several spasms of  combat between American and Iranian forces. The Strait of Hormuz remains a potential venue for conflict as illustrated in 2012 when Tehran threatened to close the chokepoint if nuclear program inspired sanctions against it were not lifted.  In 2008 the Commander of the Iranian Revolutionary Guard Corps said, “Closing the Strait of Hormuz for an unlimited period of time would be very easy.” As the CSIS report said, “Such a threat also can be largely covert or indirect. Libya demonstrated this under Qaddafi when he had a cargo ship drop mines in the Red Sea.” In 1984 at least 19 vessels transiting the Red Sea were damaged by sea mine strikes in the vicinity of the Gulf of Suez.

A threat to Bab el-Mandeb traffic would inhibit commercial shipping through the Red Sea and the Suez Canal, including the approximately 3.3 million barrels a day of oil cargoes from the Gulf bound for Western ports. A thorough 2011 CNA study on the “Economic Implications of Disruptions to Maritime Oil Chokepoints” pointed out that:

Much of disrupted oil cargo could be diverted by pipeline across Saudi Arabia to Red Sea ports for onward shipment to the Mediterranean or transited around Africa via the Cape of Good Hope — with an additional, costly seven to ten days travel time added to the voyage. However, trouble at the Bab el-Mandeb Strait would affect more than oil shipments. Other commercial shipments — containers, bulk carriers and such — would be interrupted and would have to travel overland across Saudi Arabia or around Africa for Gulf shipments. Europe to Asia cargo would be consigned to the Cape of Good Hope long route.

As the aircraft carrier Theodore Roosevelt and her escorts navigate southbound in the Red Sea and pass Perim Island in the Bab el-Mandeb Strait, her crew will undoubtedly be mindful that the security of that narrow waterway may become an important part of their mission of stability and freedom of navigation in the region.