THE TIMEWORN BEAUTY OF ASMARA, ERITREA – The New Yorker

By Gideon Jacobs Much of what we create—clothing, furniture, buildings—is plotted with an eye toward an imagined future. More often than not, we imagine that future incorrectly. Eli Durst’s photographs frequently capture traces of a yesterday 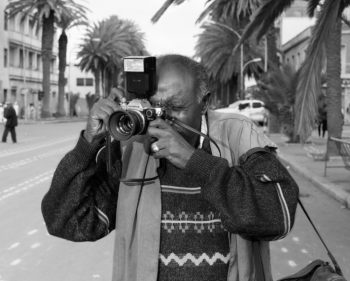 It makes sense, then, that in Durst’s first major project shot outside the U.S. he was drawn to Asmara, Eritrea, a rich but worn time capsule of a city. Italian colonizers long ago filled the city with fantastical modernist and futurist architecture. Now the surreal urban landscape houses the visual tropes of modern African life within an aesthetic imported from early-twentieth-century Europe, all of it presided over by the country’s repressive single-party government. Durst’s plan was to focus on Asmara’s unique cityscape, but, upon arriving, he discovered that the past’s hold was weakening in unexpected ways. “Several of the buildings that I had read about in architectural surveys had been closed for years, and an entire war memorial at a major intersection was just gone,” he told me. “When I asked a pedestrian what had happened to the monument, I was told that I shouldn’t ask such questions.” The authorities’ erasure of historical remnants is inscrutable and unpredictable. So Durst focussed on the people he met, using Asmara’s buildings as “markers of the past” that can “obscure the contemporary realities of life in one of the world’s poorest countries.”

The result is “In Asmara,” a body of work that has been awarded the 2016 Aperture Portfolio Prize. Every photograph in the series contains signs of both vibrancy and decay. When Durst photographs breakfast, the table is warped but the coffee is fresh. When he shoots a dilapidated cinema, we assume that the theatre has long been out of order, only to notice an audience member lurking in the shadows; the image was, in fact, taken during a showing of the “G.I. Joe” sequel. As a whole, the series is an assured, understated study of juxtaposition in a city defined by its cultural incongruities. “In Asmara” is a profile of everyday Eritreans but also of the city itself, filled with bustling life and fading fragments.