The Eritrean youth are emerging into adulthood riding the wave of despair.

By Petros Tesfagiorgis According to the daily paper Metro dated February 29, 2016 the world witnessed the French police tearing down the Jungle in Calais/France while the refugees fought back with the help of activists, resulting 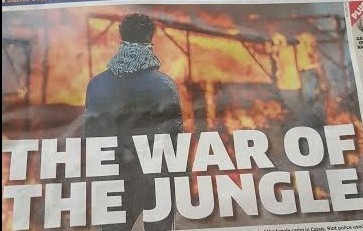 According to the daily paper Metro dated February 29, 2016 the world witnessed the French police tearing down the Jungle in Calais/France while the refugees fought back with the help of activists, resulting in burning of tents and properties.  The French Government is claiming that they are moving them to a better place with proper lights and availability of water. However there is strong challenge from the refugees and activists saying that the containers they are moving into are not enough to house all the refugees, they will be crammed in small spaces and will destroy the social life and solidarity built in the jungle.

By keeping refugees and immigrants in such abhorring condition Europe is undermining   the 1951 Geneva Convention of giving sanctuary to those who have nowhere to go.  The European governments are worried that they would not be able to accommodate thousands of refugees any more. The flow of thousands of Syrians gave rise to right wing anti-migration groups. They protest that it would create shortages in houses, schools, health services and other amenities.    The flow of refugees has become “Europe’s Refugee Crises”. Their option is to stem the flow of refugees.

In the case of Eritrea, the European Union opted to negotiate with the Eritrean Government to stop the Indefinite National service which is giving rise to the influx of huge number of young refugees to exile. The Eritrean Government gave its word that it will change the indefinite national service to the mandatory service of 18 months. For that EU rewarded Eritrea with 200 million Euro of aid.

But would the Eritrean Government stop the indefinite national service (INS)? The answer is unequivocally No.

INS is not meant to involve the youth in the work of economic development and to keep a large army in case Ethiopia invades Eritrea. The ulterior motive is to control them and render them powerless in the face of gross human rights violations against the people.  On September 18, 2001 Isaias made an early morning  coup d’état and  imprisoned  11 officials of the Government- heroes of the armed struggle- known as G-15 for demanding the implementation of the constitution and election agreed to take place in 2001. At the same time all the editors of private papers were imprisoned ending freedom of expression. Eritrean students have long history of militancy in fighting for justice and freedom during the feudal repressive rule of Emperor Haile Selassie and subsequent oppressive rule of Ethiopian military rule that deposed the Emperor.  Eritrean students in Ethiopia played a critical role in the 1974 Ethiopian revolution.  Isaias has attended Addis Ababa University and understands the protest power of students in galvanizing support for revolutionary change from the civilian population. PFDJ understands any opposition against the move to subject the Eritrean people to extreme repression will come from students and that they have to be disempowered and controlled.  To that end PFDJ has closed the only university in Eritrea, the Asmara University and abolished the independent University Students Union and imprisoned its chairman.

Higher education from 12 grade upwards was made to take place in Army camp, in a controlled environment where there is no academic freedom.  It is people who escaped to exile from this camps- particularly the notorious Sawa Training – who told their testimony of many forms of torture and rape of girls and women. Such inhumane treatment is widely documented by Amnesty International, Human Rights Watch, Journalists without Borders and many Eritrean human rights organisations.  Even the UN Inquiry Commission in its findings has concluded that crime against humanity might have been committed. For PFDJ making the national service 18 months is not a priority.   The priority is to maintain absolute power and no EU grant will change their mind.

But at what price for the youth and for the country: The Eritreans unable to work and live freely in their own country are forced to take life threatening journey to freedom. On the way,   they fall into the hands of traffickers in Sinai/Egypt who torture them to get ransom money from their relatives abroad or else kill them to harvest their kidneys for lucrative profit. They get imprisoned in many countries mainly in Egypt and Libya, put in concentration camps called “Holot” in Israel, beheaded by ISIS and get drowned in the   Mediterranean Sea crossing to Europe in unreliable boats. There are those languishing in refugee camps in Ethiopia more than 100,000 of them and in Sudan the same number. Even under age children are crossing to Ethiopia and Sudan before they reach the age of 18. In short as the fabric of the Eritrean society is destroyed the Eritrean youth are emerging into adulthood riding the wave of despair.

What do the Eritrean refugees want from Europe?  And what are the Eritrean Justice Seekers do to support them and ease their pains and sufferings?  And in what way do they network with “Welcome Refugee” and Citizens UK for coordinated work?

The refugees are taking risks to come to a safe country in order to build their shattered life into a firm pattern of meaningful life and responsibility. Given a chance they can build their life and contribute to society.  In this we have a role model, SEADA FEKADU who is “WOMEN ON THE MOVE AWARD WINNER. Young woman of the year. Part of the celebration of International women’s day.

Seada fled Eritrea in 2011 on her own, aged 16 –managing to get to the UK on the back of a truck from Calais/France.  She became involved with Young Roots and soon started volunteering to help other unaccompanied asylum-seekers children. During the award celebration which took place at the Royal Festival Hall on Friday 11/03/16 I briefly talked with her. I was impressed with her confidence and dignified posture. She was surrounded by many women admirers. There were some other award winners mostly women journalist and a Somali woman Mariam Yusuf – who fled from Somalia- is a passionate advocate for refugees and migrant women.