The Eritrean Soccer Star on the Streets of Tel Aviv

Awet Mehari made the national team in his homeland before being drafted, abused and fleeing to Israel in 2009. But his sporting dream soon became a nightmare Awet Mehari has no soccer field to play on, 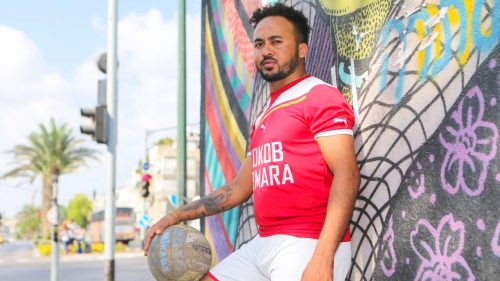 Awet Mehari made the national team in his homeland before being drafted, abused and fleeing to Israel in 2009. But his sporting dream soon became a nightmare

Awet Mehari has no soccer field to play on, no uniform of the team he played for in Eritrea. He doesn’t even have a soccer ball. What he does have is the official uniform of Star of Asmara – one of the Tel Aviv soccer teams in a local league for Eritrean asylum seekers.
Today, when a large number of his teammates have either left Israel or been sent to the Holot detention center in southern Israel, this uniform – along with the pictures and trophies – is all Mehari has left. At 27, when he should be in his sporting prime, his career comprises only mementos.
He was not an amateur player. Mehari was born in the Ethiopian capital, Addis Ababa, to Eritrean parents. This small detail would later come back to haunt him. After his mother died his family was forced to return to Asmara, the capital of Eritrea.
The talented youngster began playing on a small team, Dolphin, and at 18 was already playing regularly for the adult team. As a bench player, he occasionally helped his team gain promotion. “We had nothing,” Mehari recalls. “We spent our own money, we even bought the food. But everybody was strong and wanted to play. Even our coach spent his own money and helped us – all the players’ families contributed too.”
The next season, in Eritrea’s top league, Mehari became a team regular. He probably would have gotten there anyway, but the circumstances that led to his elevation were tragic. “They drafted eight players from the team to the worst military base there is – all the soccer players who were drafted were sent there together,” he says. “The players from all the other teams came back, but not ours.”

Despite this, the modest Dolphin team managed to avoid relegation. Mehari was the team’s main forward and he chose the Brazilian legend Ronaldo as his role model. He always chose the number 9 (traditionally the number worn by the center forward) or 99 jersey whoever he played for – and the pieces began to slot into place. He recounts how Dolphin wanted to sell him “to the biggest team in Eritrea, Al Tahrir, because the club needed money. The coaches of [Al Tahrir] wanted me and I was in really good shape – I was young and the coaches of the national team talked to me a lot,” he says.
Mehari took part in some training sessions with Al Tahrir and even spent two months with the national team, being selected to play in a friendly match. But when he was invited to join the national team, he also received a draft notice along with it.
Eight of the team’s players were drafted for an unspecified amount of time. Mehari served 10 months in the army and even though he played soccer, he did hard labor too, and suffered physical and mental abuse from his commanders. In the end, he managed to escape.
“We were four people and no one helped us,” he recalls of his escape. “They sent us to bring wood, we walked for two and a half hours and then came back. They called us to eat, and while everyone was eating we ran away. When people are hungry they don’t notice.”
The escapees ran for two hours, until the danger that they would be caught finally passed. “It was really hard,” says Mehari. “We didn’t have food for four days, only water. You drink even from the street.”

At the end of their four-day trek, they crossed the border into Sudan and stayed in the Shagarab refugee camp. Mehari spent three months there, moved to the capital Khartoum and then, while sick with malaria, fled through Sinai – a very arduous trip – to Israel. This was in 2009.
When he arrived at the Saharonim detention center where asylum seekers were sent, he told them he was born in Addis Ababa. “They told me I was Ethiopian. Because of that I was in the prison facility for eight months. Other people left within a week. I sat there for no reason.”
Ultimately, after a lot of suffering and no small amount of bureaucracy, he left Saharonim and took a bus to Tel Aviv.
“I had no one in the city, I had nothing. After two months, I found a small restaurant in Jaffa and worked there for two years,” Mehari says. After those two years, he moved on to the Orna and Ella culinary institution in Tel Aviv.
Soccer gave him some hope. As it happens, he had become quite well-known in Eritrea, as befits a national team player. He became a star of sorts here in Israel. When he arrived, although he didn’t immediately find work, he “found friends who played at the Central Bus Station. A lot of people recognized me, knew I played [soccer], so they told me, ‘Come play.’ We had a team and played every Saturday. After that, teams in Jerusalem and Ashdod emerged. We established a league of six teams and the crowds came. [Star of Asmara] won the title and I won the best player award,” he recounts.
More tournaments were staged in the following years, and there was even a makeshift “asylum seekers world cup” in Israel. “We were knocked out after two games – the Nigerians were particularly strong,” Mehari says.
But the golden age of Eritrean soccer in Israel didn’t last long. Mehari’s side used to play in south Tel Aviv, but that soccer field is unavailable to them now. “We paid 400 shekels ($115) for every game. Every day there was a game or two. They closed the fields to us, even before Holot.”
The years passed and Mehari’s dreams of playing professional soccer faded away. “I thought that when I arrived in Israel it would be easier. I would play soccer, join the league,” he admits. “But it wasn’t like I thought. [Israel] is really hard. I have one friend who started to play here. In Eritrea he played on the national team and in the top league. He had a few trials here a few years ago, but then they told him: ‘Bring permission from Eritrea.’ How can he get permission? He had fled.”
Four years ago Mehari submitted an asylum request, citing the requirement to be drafted into the Eritrean army for an unspecified period and the potential persecution because he had fled. Two weeks ago, though, his request was rejected. “The military service of the applicant did not allow him to fulfill his dream to play soccer,” wrote the chairman of the committee examining his request.
He submitted a request to have his case reexamined, with the aid of the HIAS organization that provides pro bono legal assistance for refugees.
Mehari’s request highlights the harsh attitude facing athletes who fled Eritrea. The fear is that the Eritrean government will persecute Mehari for his actions and consider his desertion from the army an act of treason.
The Population, Immigration and Border Authority’s response to the request ignores the special circumstances that characterize the treason attributed to sportsmen who deserted the Eritrean national team, say Mehari’s lawyers. In addition, such athletes have been recognized as refugees in Europe and the United States. Those the Eritrean government sees as political opponents are also persecuted, including imprisonment under brutal conditions and without trial. They are also tortured – sometimes to death, say his lawyers.
The border authority (part of the Interior Ministry) says it examines asylum requests according to the international Refugee Convention and the criteria it sets, and based on the individual circumstances of each case. But if there are new circumstances, it is possible to submit a request to reexamine the matter, it notes.
A few of Mehari’s closest friends successfully gained political asylum in Europe: In 2012, after a soccer tournament in Uganda, 17 members of the Eritrean national team (along with the team doctor) fled. A short time later they received refugee status in the Netherlands and moved there. As opposed to Mehari, who fled to Israel three years earlier, they are playing soccer, even it is for small teams and not necessarily professionally. They tell him things are good in their new lives.
Although Mehari has submitted the request to have his case reexamined, he says it doesn’t matter anymore, since his leaving Israel is now only a matter of time. His wife is currently living in Cardiff, and the minute he is recognized by the British authorities as her legal husband, he will join her and their 7-month-old daughter – who he has never seen. His wife left for Britain when she was pregnant.
Once his status is officially recognized and he is legally defined as a refugee, Mehari can begin to live a normal life. But there is one thing he knows he will find in Wales: soccer. “I want to play. I think I still have it in me,” he says. “I’m thinking of studying sports, maybe to be a coach or assistant coach. What I didn’t find in Israel and Eritrea, I’ll try to find there.”