March 8, 2013 Solidarity March with Eritrean Women We are marching today in solidarity with our Eritrean mothers, sisters and daughters, who are suffering as victims of human rights abuse in their own country as well as 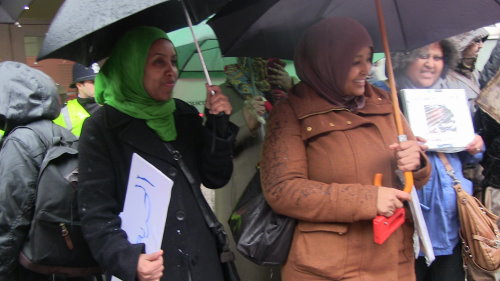 We are marching today in solidarity with our Eritrean mothers, sisters and daughters, who are suffering as victims of human rights abuse in their own country as well as in lands where they have ended up refugees. Because of his failure to protect these women and for his role in perpetrating much of the abuse we are calling for Mr Isaias Afwerki to step down from office and hand political power to the people of Eritrea.

Eritrean women have trailed a blaze in their fight against oppression; they overcame traditional practices to rise and challenge political oppression and this has gained them international acclaim. Sadly, all that struggle bore little to no fruit.

Today many iconic women Freedom Fighters find themselves, political prisoners, without even the most basic of rights of a visit from their children or their elderly parents, to mention a few of these women:

These women and many like them simply disappeared into a prison system where people vanish without a trace. We condemn your government’s barbaric treatment of women prisoners and their families.

Additionally thousands of young women, including vulnerable teenagers, have become victims of rape and sexual harassment at the hands of military commanders who use their position in the system to take advantage of vulnerable young women, forcibly conscripted into the army as part of their compulsory national service.

As a result many women have become refugees falling into the hands of smugglers and traffickers who not only extort money from them, alongside their male counterparts, but also abuse them sexually, inflicting heinous sexual violence on them. The Eritrean Government remains silent on the matter despite the fact that a recent UN report identified high ranking military officials linked to the human trafficking racket.

These violations against our Mothers, Sisters and daughters is an abject indictment of the failures of the regime in Eritrea and particularly the failures of Isaias Afwerki, we therefore demand that he steps down and hands power to the people of Eritrea as the rightful custodians of political power in the country that they fought to free from colonial oppression.

Victory to the oppressed women of Eritrea

Eritrean women in the UK