Semere Russom: The Alleged Notorious Killer of Khartoum is now in Addis Ababa by S. Hiyab

Semere Russom: The Alleged Notorious Killer of Khartoum is now in Addis Ababa The Eritrean dictator, Isaias Afeworki, has the other day appointed Semere Russom as his Ambassador in the Ethiopian capital, Addis Ababa, where many Eritreans 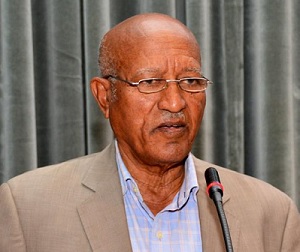 Killer of Khartoum is now in Addis Ababa

The Eritrean dictator, Isaias Afeworki, has the other day appointed Semere Russom as his Ambassador in the Ethiopian capital, Addis Ababa, where many Eritreans opposed to the repressive regime in Asmara have taken refuge since a long time. This is a sincere warning to them and other Eritreans who intend to visit Addis Ababa in the future.

Semere Russom was dictator Isaias Afeworki’s envoy in the Sudan for many years since the mid-1970s. Prominent political and military leaders of the ELF were among the many victims inside the Sudan of Semere and his boss, Isaias Afeworki, in the years before and after independence. For example Yemane Teklegiorgis, a veteran EPLF fighter and member of its security outfit (Halewa Sewra) was with Semere Russom the day Haile Gharza was murdered inside Khartoum in 1984. Yemane, now an author of a book on those and similar grisly killings organized by Semere Russom in the Sudan, will hopefully retell the story himself as he already did in writings and his bold interviews with Eritrean opposition mass media.

But Haile Gharza was not the only victim of Semere Russom and his master, Isaias Afeworki. Earlier on 5 June, 1983, Saeed Saleh was murdered in Kassala. Woldedawit Temesghen fell on 20 July 1985  followed by the murder of Idris Ibrahim Hangala on 20 September 1985; Mahmoud Hasseb on 3 September 1989.

Even the former leader of the ELF army, Abdalla Idris, was targeted personally by Semere Russom in Khartoum although the targeted figure could skillfully escape death.

Semere Russom and those who followed in his footsteps in the Sudan also continued the killings and kidnappings  from the Sudan.  Among the earliest victims were: Michael Ghaber who was targeted for killing by two identified assassins in 1989, and later killed in a mysterious “accident” on 25 May, 1922.  Earlier to Michael Ghaber’s death/murder,  two top leadership members of the ELF-RC, Woldemariam Bahlibi and Teklebrhan Ghebdretsadiq (Wedi Bashai) were kidnapped from Kassala on 26 April 1992 and their whereabouts is not known to this day. Tens of other leading freedom fighters were assassinated kidnapped by the likes of Semere Russom, among them the EPDP leadership member Mohammed Ali Ibrahim, who was kidnapped from Kassala on 12 February 2012.

“Ambassador” Semere Russom’s mission in Addis Ababa as of this week will be organizing work for the security agents of the Asmara regime who reportedly  numbered not less than 230 as of the date of dictator Isaias Afeworki’s visit to Addis Ababa between 14-16 July 2018. Semere Russom was not only an enemy of rival freedom fighters but also was anti-Eritrean struggle for freedom until the 1970s.