A selfie of Miss Israel and Miss Iraq taken in Las Vegas and posted by both contestants on Instagram has unleashed a digital diplomatic debate. Intended as a message of peace for the Middle East, 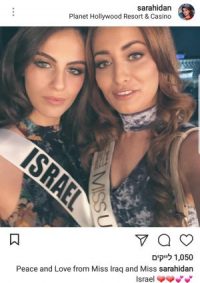 A selfie of Miss Israel and Miss Iraq taken in Las Vegas and posted by both contestants on Instagram has unleashed a digital diplomatic debate. Intended as a message of peace for the Middle East, it has drawn criticism.

Israel and Iraq may not have diplomatic relations, but that didn’t stop the two countries’ representatives in the Miss Universe 2017 beauty pageant from snapping a joint selfie that has drawn praise and criticism across social media.

Both Miss Israel, Adar Gandelsman, and Miss Iraq, Sarah Idan (also Eadan), shared the photo they took on November 14 in Las Vegas on their respective Instagram accounts. The two finalists were in the Nevadan city ahead of the pageant final on November 26.

Gandelsman called her Iraqi counterpart “amazing” in the post while Idan shared the post with the greeting “peace and love.”

The Iraq-born Idan, who moved to the United States to study music, is her home country’s first competitor in 45 years. The selfie of her and her fellow Middle East competitor was one of many that she took with individual representatives from other nations and shared on her Instagram account.

Israel’s Gandelsman, a second-year solider in the Israeli Defense forces who has Brazilian roots, also posted numerous shots of her with other finalists on her Facebook page.

Nonetheless, the snapshot of the two caused thousands to comment on each post and unleashed a storm of user responses and media attention.

Some praised the two young women for sending out a message of peace and hope. Ofir Gendelman, Israeli Prime Minister Benjamin Netanyahu’s spokesperson to the Arab media, hailed Idan and Gandelsman for sharing “a great message of hope for the region” and wished them both luck.

Still, some 2,300 users had liked Idan’s original selfie post as of Friday.

In light of digital criticism, Idan defended her photo in a subsequent Instagram statement, saying that she posed with Gandelsman to promote peace, but this does not mean she agrees with Israel’s government policy in the region. She added that she did not mean to “be offensive to the Palestinian cause” by posting the selfie.

While many may think of beauty pageants such as Miss Universe or Miss World, set for this Sunday, November 18, as light-hearted and superficial affairs, the contests are often the backdrop against which political tensions play out.

In 2015, Miss Lebanon, Saly Greige, faced calls to have her national title from 2014 taken away from her after she appeared in a Facebook photo with her Israeli counterpart, Doron Matalon.

The Miss Universe pageant, run by the organization of the same name, is one of the world’s major beauty contests. It is held in more than 190 countries worldwide and draws billions of viewers each year.