Robert Mugabe in detention after military takes control of Zimbabwe 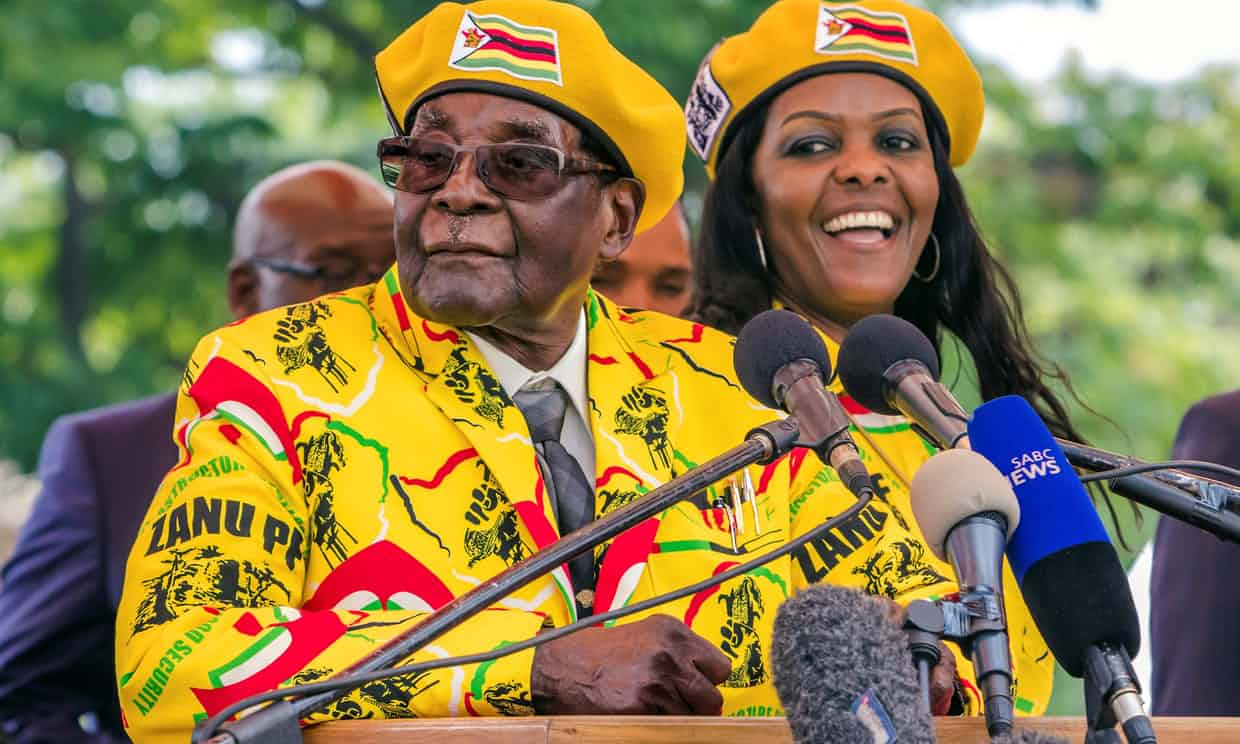 Robert Mugabe remains in detention at his home in Zimbabwe more than 12 hours after the military declared on national television that it had temporarily taken control of the country to “target criminals” around the head of state.

The move by the armed forces appears to have resolved a bitter battle to succeed the 93-year-old president, which had pitted his former vice-president, Emmerson Mnangagwa, against Mugabe’s wife, Grace.

There were unconfirmed reports that Grace was in Namibia on Wednesday on business.

The military takeover comes two days after the army chief – flanked by other senior officers – said he was prepared to “step in” to end turmoil in the ruling Zanu-PF party.

It is likely to signal the departure from power of the world’s oldest leader within days, weeks or at most months.

One high-profile opposition leader said there was “a lot of talking going on”, with the army reaching out to them to discuss the formation of a transitional government after Mugabe steps down.

Zimbabwe’s fragmented opposition has not publicly condemned the military move. Nelson Chamisa, the deputy head of the opposition MDC party, called for “peace, constitutionalism, democratisation, the rule of law and the sanctity of human life”.

Tendai Biti, an opposition leader, called for a “roadmap back to legitimacy”.

“What is key is that a traditional authority is set up which is inclusive with the opposition and the ruling party … We need a dialogue too with [regional organisations], the African Union and the United Nations. We can’t solve this problem on our own,” Biti said.

South Africa appears to be backing the takeover and sent ministers as envoys on Wednesday morning. The South African president, Jacob Zuma, said in a statement that he had spoken to Mugabe, who he said had confirmed he was “confined” but “fine”. Zuma called for calm and a transition in line with the Zimbabwean constitution.

Soldiers have blocked access to parliament, government offices and courts in Harare, the capital, residents said. Access to the president’s official residence was also blocked by troops. But the city appeared calm.

“Although a little bit scary, I think this is good for us. It has been a long time, we are going through a lot of hardships,” a fruit and vegetable seller in the centre of the city said.

Early on Wednesday, a military spokesman, Maj Gen SB Moyo, made an announcement on state television saying Mugabe and his family were “safe and sound and their security is guaranteed”. Troops seized the network’s offices late on Tuesday night.

Moyo insisted – despite appearances – that a coup had not taken place, adding: “As soon as [the armed forces] are done the situation will come to normalcy.”

There was no sign of any resistance to the takeover or to the arrest of a series of senior officials associated with Grace Mugabe and her G40 faction. The youth wing of the ruling Zanu-PF, which had made defiant statements directed at the military earlier in the week, appeared to condone the military action.

Mnangagwa, a former spy chief, has strong support among many in Zimbabwe’s armed forces, and it is unclear who might oppose him in coming days. In contrast, Grace Mugabe is deeply unpopular and has few allies internally or, crucially, regionally.

The US embassy in the capital tweeted a message citing “ongoing uncertainty”. A statement posted by the embassy later told US citizens in Zimbabwe to “shelter in place until further notice”. The British embassy said that due to the uncertain political situation British nationals should remain at home.

Evan Marawire, a pastor and one of Zimbabwe’s best-known activists, called on Zimbabweans to “remain calm and hopeful, alert but prayerful”. Marawire, who has been jailed and prosecuted since launching the #thisflag movement last year, which led to huge protests, did not directly condemn or condone the military takeover, but said developments were “the culmination of the work that citizens have been doing”.

Mugabe’s sacking of Mnangagwa came as a shock to many observers. Nicknamed “the crocodile” from his time fighting in the country’s liberation wars, he had been considered the most likely candidate to succeed Mugabe if the president decided to step down or died in office.

Mnangagwa’s sacking was widely seen as a move to pave the way for Grace Mugabe to take power instead. It caused widespread discontent among Mnangagwa’s supporters and exposed deep factional divides within Zanu-PF ranks.

Mugabe has systematically dismissed veterans of the liberation struggle from party posts in recent years, leaving the top echelons stacked with officials who did not fight in the independence war. This exacerbated a long-running battle between an old political elite forged in the 1970s and 1980s, and a new generation that coalesced around Grace Mugabe.

War veterans broke ranks with the president in 2016 and have vowed to form a broad front with the opposition to challenge his rule.

Chris Mutsvangwa, the head of the war veterans’ group, told reporters in Johannesburg last week that Grace Mugabe was “a mad woman” who had won power through a “coup … by marriage certificate”.

Mutsvangwa issued a statement from Johannesburg on Wednesday praising the military for carrying out “a bloodless correction of gross abuse of power” that would return Zimbabwe to “genuine democracy”.

Grace Mugabe’s reputation has been tarnished by a series of violent outbursts, including an alleged assault against a model she had found with her sons in a luxury apartment in Johannesburg in September. Granted diplomatic immunityafter the incident, she was allowed to leave South Africa despite a police inquiry, and denies any wrongdoing.

Reports of extravagant purchases, including property in South Africa and a Rolls-Royce, have also angered many Zimbabweans. Pictures of one of the first lady’s sons apparently pouring most of a bottle of champagne over a luxury watch worth tens of thousands of dollars in a nightclub were shared widely on social media this week.

The crisis comes at a time when Zimbabwe faces severe economic problems. The country is struggling to pay for imports due to a shortage of dollars, which has also caused acute cash shortages. State employees, including some soldiers and policemen, have gone for months without payment of their salaries, deepening discontent with the government.