Rescue at Sea: ‘It Looked Like They Were Sleeping’ When the Migrant Offshore Aid Station, a Malta-based NGO, rescued 352 Eritreans stranded in Libyan waters, four of their fellow passengers didn't make it to safety. Here, 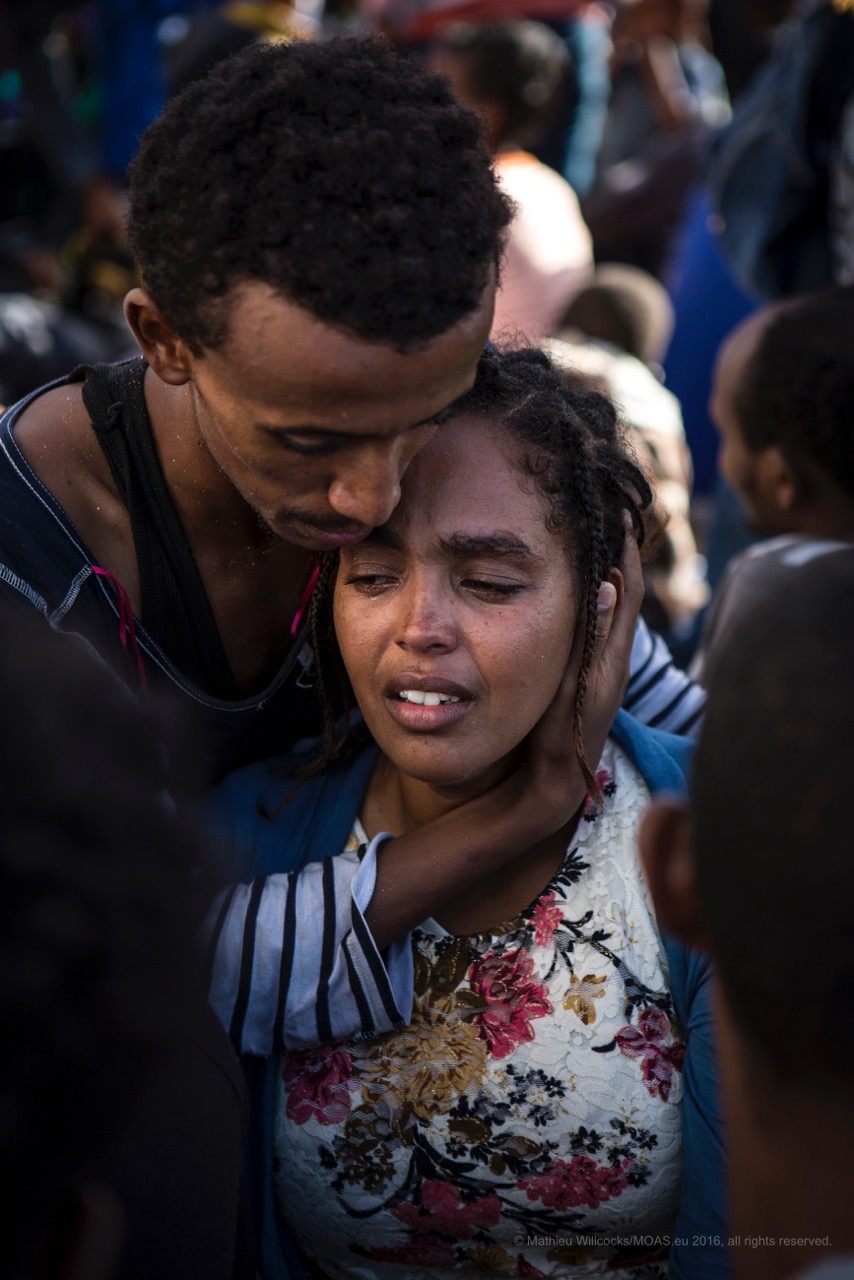 When the Migrant Offshore Aid Station, a Malta-based NGO, rescued 352 Eritreans stranded in Libyan waters, four of their fellow passengers didn’t make it to safety. Here, members of the rescue team share images from the dramatic rescue and its aftermath.

A PHOTOGRAPHER WHO was one of the first to make the grim discovery of four dead Eritreans in the hold of a vessel from which hundreds of migrants were rescued on July 12 said he thought the young men were sleeping at first.

“I saw this young man who was visibly unconscious, it looked as if he was sleeping on his friend’s shoulder,” said Migrant Offshore Aid Station (MOAS) photographer Mathieu Willcocks.

A man gasps for breath and is eventually revived. But four of his co-passengers did not make it. Human rights organizations equate the conditions prompting flight of Eritrean civilians with “slavery.” (MOAS/Mathieu Willcocks).

Two other men were found in critical condition. One was given CPR by a search-and-rescue crew member and an emergency doctor on board and was stabilized enough to be airlifted. The other migrant was stabilized by emergency staff and is still on the Responder.

The bodies were found in three separate compartments of the small wooden vessel from which 352 migrants were rescued early on July 12, some 17 miles (27km) off the Libyan coast by Migrant Offshore Aid Station (MOAS) workers.

The rescued included 150 women and 20 children, the majority being Eritrean.

“When we started retrieving people from below deck, we didn’t know if they were sleeping, unconscious or dead. They were packed so tight in the hold,” said MOAS rescuer Nick, who was the first to jump on to the boat.

The MOAS vessel Responder spotted the heavily overcrowded wooden boat on their radar at 3:30 a.m. At 4:30 a.m, the crew was in sight of the boat but it was still pitch dark.

The MOAS Responder approaches the boatful of people. (MOAS/Mathieu Willcocks)

At 5 a.m. a fast rescue launch was lowered into the water and the recovery operation began.

“It was very emotional for everyone when the bodies were brought on board and carried into the morgue,” said Willcocks.

So far, 2,521 migrants have died along the Central Mediterranean route as of July 10, 2016, making up approximately 85 percent of all deaths in the region.

Since the revolution, Libyan smugglers have been taking increasing risks with the lives of migrants and asylum seekers, putting huge numbers of people in unseaworthy boats.

A rescued man cries out in both relief and sadness.Over 200,000 asylum seekers of different nationalities have reached Italian shores this year. (MOAS/Mathieu Willcocks)

Typically, there is a price differential that determines whether a migrant stays on the deck of the vessel or in the hold. The ones in the hold are the ones who can afford to pay the least. Current prices on the coast of Tripolitania stand at between $250 and $500 (1,000–2,000 Libyan Dinar) per person.

Those who are put in the hold are cramped in poorly ventilated chambers where the engine fumes further poison the air. Just under a year ago, 52 bodies were pulled from the hold of a wooden boat some 30 miles north of Libya.

One of the 352 survivors grieves the death of his friend. One in 50 Eritreans sought asylum in Europe since 2012. (MOAS/Mathieu Willcocks)

Moreover, many of the people who died in what is still considered to be the worst migrant disaster in the Mediterranean on April 18, 2015, went down with the vessel, trapped in the hold.

Towards the end of June, the Italian Navy recovered the vessel at the end of a year-long operation in which specialized teams identified and brought to the surface the 65ft (20m) wreck from a depth of about 1,230ft (375m), 85 nautical miles northeast of the Libyan coast.

Two of the rescued men are overwhelmed with emotion. The government of Eritrea has imposed emergency rule since 1998, when it fought a war against Ethiopia. (MOAS/Mathieu Willcocks)

It is estimated that there were between 250 and 300 bodies inside the wreck. A forensics team in Italy is currently carrying out an investigation on the bodies. The exact number of people who perished may never be known. It is known that only 28 people made it out alive and that, not counting the ones that are currently being examined by Italian investigators,169 bodies were recovered,

A version of this story was originally published by the Migrant Report. The images were contributed by MOAS from their latest rescue operation. Both have been republished with permission.