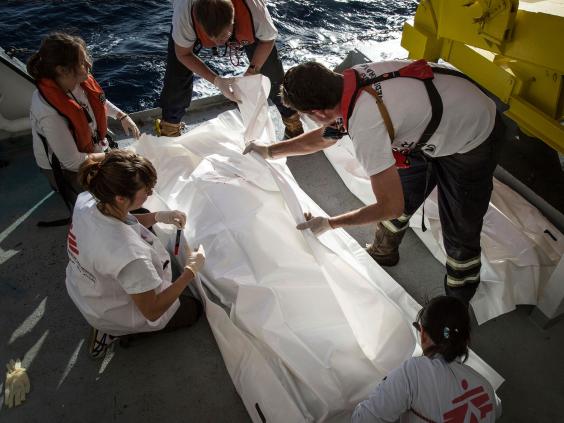 More than 100 refugees have drowned after a boat sank in rough conditions in the Mediterranean Sea as the crisis shows no sign of slowing.

The Italian Navy was searching for survivors from the vessel, which was believed to be carrying up to 110 people.

Only four survivors were pulled from the water, with at least eight bodies found so far.
Flavio Di Giacomo, from the International Organisation for Migration, told The Independent around 106 people were thought to have died and described the conditions at sea as “extremely bad”.

The boat went down in waters between Libya and Italy, which has become the deadliest sea crossing in the world since the start of the refugee crisis.

It claimed the vast majority of more than 5,000 lives lost in treacherous boat journeys to Europe in 2016, the deadliest year on record, with people drowning or being crushed or suffocated in overcrowded smugglers’ boats.

Saturday’s disaster was the worst single incident so far this year, which has already seen at least 122 deaths at sea.

Rescue workers warn that the crisis is showing no sign of slowing in the Central Mediterranean, which has become the main route since the EU-Turkey deal was implemented in March to reduce comparatively shorter and safer crossings over the Aegean Sea.

At least 550 refugees were rescued on Friday alone off the coast of Libya, where continuing conflict and lawlessness since the British-backed defeat of Muammar Gaddafi has allowed the smuggling and exploitation of migrants to thrive.

Two people were found dead at the bottom of one of the four boats saved and the bodies of four other migrants were found off the coast of Spain. Several asylum seekers have also died in the extreme weather conditions gripping much of Europe in recent weeks.

More than 5,000 refugees were drowned, suffocated or crushed while attempting to cross the Mediterranean and Aegean seas in 2016, making it the deadliest year on record.

Many deaths are thought to go unrecorded, with bodies either disappearing or washing up on the shores of Libya, where authorities do not routinely release casualty figures. Some boats are sighted by Italian authorities but disappear before they can be reached by rescue ships.

The Unravelling the Mediterranean Migration Crisis (Medmig) project partly blamed Britain and EU nations for rocketing death rates, concluding that the refusal to open up legal routes for those seeking safety in Europe has increased demand for people smuggling on ever more dangerous routes.Operations to combat the thriving trade have driven the use of smaller and less seaworthy boats to cross the Mediterranean, which are harder to spot by ships patrolling as part of the EU’s Operation Sophia and authorities in north Africa.

Poorly made dinghies are now being loaded with more than 150 people a time, creating the risk of sinkings, capsizings or the inflatable bursting under the strain, as well as deadly fuel spills.

More than 1,600 migrants and refugees have arrived by sea in Europe so far this year. The vast majority of those arriving in Italy are African, from countries including Nigeria, Eritrea and Guinea, while most of the much lower number of asylum seekers reaching Greek islands are Syrian, Afghan or Iraqi.