Press Release: The Joint Transitional Leadership for the merger of:- #Eritreans for Facilitating National Dialogue-EFND and Eritrean Global Solidarity- EGS

Twenty-six years after Eritrea achieved its independence and gained its sovereignty, the Eritrean people find themselves denied their God-given freedom. Independent Eritrea has become the home to the enslaved Eritreans in general, and the younger generation of 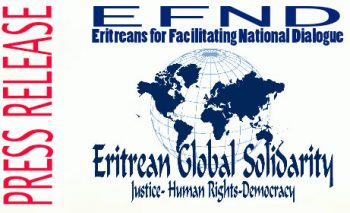 Twenty-six years after Eritrea achieved its independence and gained its sovereignty, the Eritrean

people find themselves denied their God-given freedom. Independent Eritrea has become the home to

the enslaved Eritreans in general, and the younger generation of Eritrea in particular.

Twenty-six years after Eritrea’s independence, the centralized power of PFDJ in Eritrea is not

governed by legal and constitutional instruments of legality. Lawlessness rules in Eritrea. The

practices of the Eritrean government are totally criminal. The Eritrean officials thrive in criminal activities.

They use deception, lies, misinformation, and extensive networks of corruption to agonize and

the structured task of the PFDJ regime. Advocating for human rights in Eritrea is considered a

crime by a regime that prides itself as standing against advocates for democracy.

Twenty-six years after Eritrea achieved its sovereignty, the Eritrean people find themselves

subjected to a wholesale collective punishment. Eritreans, young and old, men and women, are

expression.   The   youth of Eritrea who were hoped   to continue the heroic legacies of their

are shot by PFDJ border guards under instruction to shoot and kill. Young Eritrean boys and girls,

the hope and bastions of Eritrea’s future, are driven away from their land attempting to escape

the hellish treatment under PFDJ rule. As they escape to distant lands, Eritrean youths find

themselves exposed to predators, killers, kidnappers, and enslavers.

Twenty-six years since Eritrea’s independence and sovereignty, the Eritrean family is destroyed,

Twenty-six years after Eritrea gained its independence and sovereignty, the Eritrean people

remain enslaved at home and helpless, homeless, and hopeless refugees at all corners of the

world. After Eritrea gained its sovereignty, Eritrea is sovereign, but the Eritrean people are not

free. They are being subjected to endless human rights abuses of unprecedented magnitude.

A Call for Unity and Action:

While we are celebrating our independence, and honoring the selfless sacrifices of our fallen

heroes and heroines, as citizens, it is our responsibility to get actively involved. It is our duty to

and peace to our nation and our longsuffering people.