Patriarch Antonios of Eritrea: An Icon of St. Paul in Chains

By Scholarios Gennadius The rightful occupant of the Episcopal throne of the Eritrean Orthodox Tewhado Church is widely known to have been unlawfully detained in an undisclosed location within the general confines of Amasra, Eritrea for 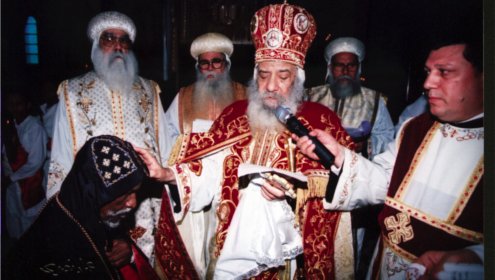 The rightful occupant of the Episcopal throne of the Eritrean Orthodox Tewhado Church is widely known to have been unlawfully detained in an undisclosed location within the general confines of Amasra, Eritrea for approximately 7 years and an uncanonical claimant has been occupying the Patriarchal throne. Reliable sources have indicated that while His Holiness is of delicate health due to a lack of proper medical care, his spirits remain high and his faith unshaken in response to a dedicated and fruitful prayer life.

His Holiness is viewed as a true icon of St. Paul who is depicted as a prisoner in chains in the books of Philemon 1:1, Ephesians 3:1 and especially in 2 Timothy 1:8 where he asks Timothy not to be ashamed of his imprisonment, but to join him in his suffering for the Gospel.  In this manner of faithful resolve, His Holiness Antonios is steadfast and endures his suffering without complaint or ill words toward those who detain him just as St. Paul instructed his captors rather than criticizing them.  This is why His Holiness is a living icon of St. Paul in Chains and establishes his rightful claim to the Episcopal Throne of the Eritrean Orthodox Tewhado Church and explains why most of the faithful continue to view His Holiness as the rightful leader of the Eritrean Church and continue to advocate for his well being while praying for his eventual return.

His Holiness is currently 87 years old and suffers greatly from decimating and debilitating effects of advanced diabetes.  It is important to recognize that the major concern of the Eritrean faithful is the unattended medical condition of their spiritual leader, which makes their concern a humanitarian matter rather than a political or church matter.  According to Article 3 of the Geneva Convention it is stated that as a minimum, the wounded or sick should be collected and cared for and this is based upon recognition of the moral and ethical treatment of another human who is suffering or in the involuntary care of another party.  Article 3 of the Geneva Convention also indicates that all prisoners of conflict should be treated humanely and protected from “outrages upon personal dignity, in particular, humiliating and degrading treatment…,” which denial of appropriate medical treatment, religious observance and human companionship may be so characterized.

The irony of the situation is that His Holiness is not a prisoner of war, a combatant, an enemy, a political or military threat; nor a bearer of arms against a sovereign nation.  Nevertheless, according to reliable internal sources, he is being denied one of the most basic of human rights, which is necessary medical care in response to a well known disease that is undoubtedly exacerbated by advanced age resulting in steadily declining health and well being, which failing medical and humanitarian intervention will ultimately result in the unfortunate death of a humble and faithful human being.  Remarkably, the aforementioned information sources have indicated that despite his declining health Patriarch Antonios is always in good spirits and remains in prayer for his captors, as well as for his spiritual children of his beloved Eritrean Orthodox Tewhado Church.

This behavior is reminiscent of St. Paul during his period of captivity and is the basis for His Holiness being considered an icon of St. Paul in Chains.  The chains by which he is bound are as much spiritual as they are physical because they restrict His Holiness Antonios from exercising his spiritual leadership over what has become a widely disbursed church with members in many countries outside of their homeland who still look to their patriarch for spiritual guidance and reassurance.

The faithful priests, deacons, religious and faithful of the Eritrean Orthodox Tewhado Church which is in Diaspora on many shores request your prayerful support in advocating for the humane treatment and appropriate respect for His Holiness, Patriarch Antonios and that of the worldwide community of faith.  For more information on the plight of Patriarch Antonios and to sign the petition for his return please follow our link to Support Patriarch Antonios.