The Gambia’s new president, Adama Barrow, returned to his country on Thursday afternoon, prompting a noisy and joyous wave of hope and excitement at the prospect of a brighter future for the small, poor west 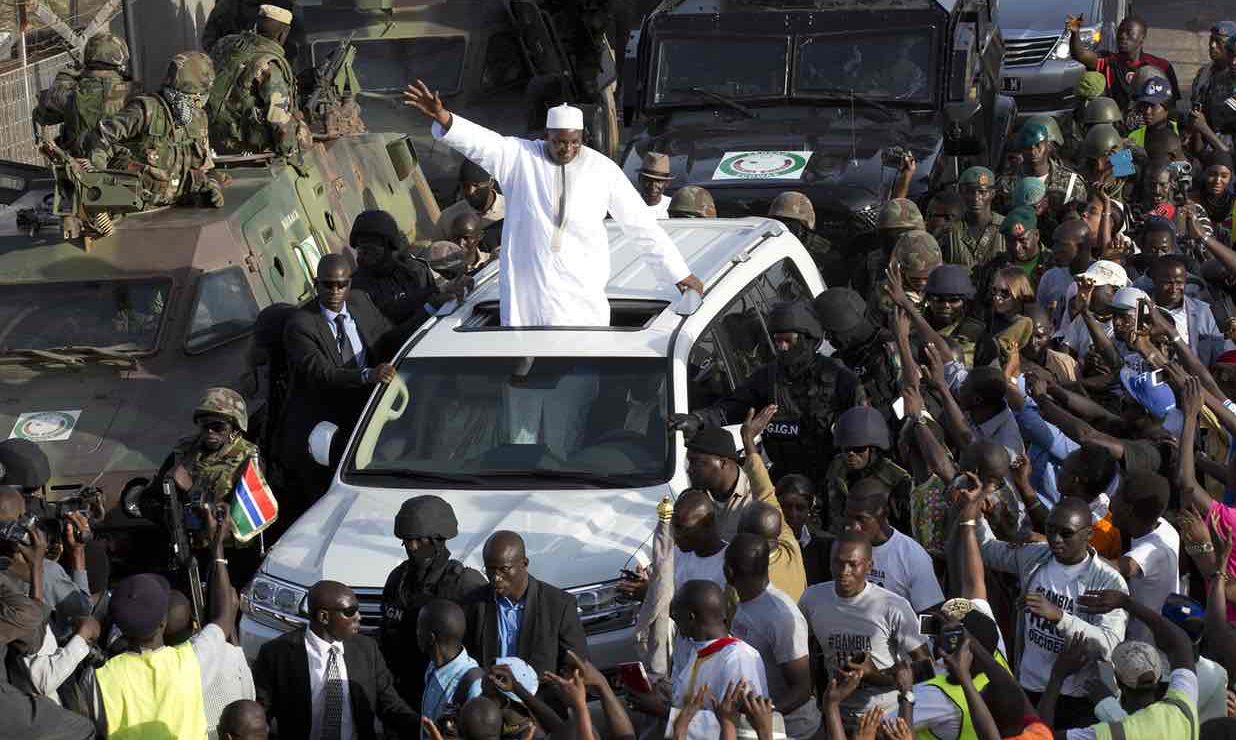 The Gambia’s new president, Adama Barrow, returned to his country on Thursday afternoon, prompting a noisy and joyous wave of hope and excitement at the prospect of a brighter future for the small, poor west African state.

By late afternoon, thousands of people had lined the streets of Banjul, the capital, blowing whistles, dancing, banging drums and singing “We welcome you, our president, our hope, our solution” in the local Fula language.

Hundreds more thronged the airport, cheering when Barrow emerged from the plane that had brought him from neighbouring Senegal in a flowing white robe, accompanied by his wife and children. He walked slowly along a red carpet, greeted by military officials and members of his coalition government.

“I am a happy man … I think the bad part is finished now,” the 51-year-old former property developer told reporters at the airport.

The arrival of Barrow brings to an end a prolonged political crisis in the Gambia.

Fatou Jagne Senghor, the west Africa director of Article 19, a pro-freedom of expression organisation, said the development was very welcome. “The Gambia has been waiting for this. Everyone has been … looking forward to the new era where people’s voices are heard,” said Senghor, who is from Gambia.

Ebrima Bah, who was waiting at the airport, said: “The arrival is long overdue. His arrival is raising my confidence in the new government.”

The former British colony was thrown into chaos in December when the autocratic president, Yahya Jammeh, refused to step down after unexpectedly losing elections to an alliance of opposition parties, despite repeated efforts at mediation by powerful regional states including Nigeria.

Jammeh eventually left the Gambia, which he had ruled for 22 years, at the weekend after thousands of troops from other west African nations entered the country and he secured a deal that allowed him to escape prosecution and keep much of his assets.

Low-flying fighter jets and the presence of Nigerian and Senegalese troops at the airport on Thursday were a reminder of the turbulent transition and of the major challenges which face Barrow.

“The transformation will not be easy,” said Senghor. “To bring security, stability and fundamental freedoms when institutions are broken, the judiciary is not functioning, is going to be a major challenge.”

A senior government official in Banjul said people were “very happy” and that Barrow’s priority would be to put into place “the pillars of reform and human rights”.

During the election campaign, Barrow promised wide-ranging reforms to overturn many of the authoritarian policies of Jammeh, who was accused of imprisoning, torturing and killing his political opponents.

Last year, a series of protests led to the detention of more than 90 opposition activists and supporters. One prominent opposition politician, a father of nine, was beaten to death in custody.

Kanamo Sansou, who was sitting with his friends in a market in Serrekunda, near Banjul, said: “I’m 100% a Barrow supporter and I’m more happy than I can say.”

Ibrahima Gaye, a pensioner, added: “He will be different in all aspects … we have been living under dictatorship for 22 years. You can go home at night and sleep without worrying you will be arrested before daybreak.”

Earlier in the day, Swiss prosecutors confirmed they had detained the former Gambian interior minister after allegations that he must have been aware of grave human rights abuses.

Ousman Sonko, described as one of Jammeh’s top aides, fled the Gambia for Europe after being sacked by the authoritarian ruler in September.

Barrow has asked the force of about 7,000 west Africa troops to remain in his country for six months.

Diplomats had urged him to return quickly to curb the impact of the political crisis on the tourist-reliant economy, which is already in a fragile state.

After languishing in geopolitical obscurity for decades, the Gambia has produced a wave of refugees, focusing more attention on the country. The combination of repression and poverty has driven tens, possibly hundreds, of thousands of young people out of the country in recent years, many of whom have head across the Sahara to the Mediterranean coast in a desperate attempt to start new lives in Europe.

The route, known locally as “the back way”, is extremely dangerous, with many perishing in the Sahara or during the hazardous sea crossing.

Aid agencies have spoken of significant humanitarian need in poor areas of the Gambia.

Barrow, who will be staying at his own residence until the State House, Jammeh’s former seat of power, is declared safe, will have to overcome years of economic isolation and lack of investment.

His first job is to deal with an internal crisis after it emerged his pick for vice-president, Fatoumata Jallow-Tambajang, may be too old for the role under the country’s constitution.

Barrow must also deal with latent ethnic tensions between Jammeh’s minority Jola people and the majority Mandinkas, to whom the new president belongs. Many of the upper ranks of the military are Jola.

There is some controversy over the relatively lenient terms under which Jammeh left the Gambia for exile in Equatorial Guinea. Barrow has reportedly assured the former ruler he will have all the legal rights given to a former president, which includes immunity from prosecution barring a vote by two-thirds of the national assembly.

The new government has confirmed Jammeh will be permitted to keep a fleet of luxury cars, despite the accusation by authorities that he looted $11.4m (£9m) from state coffers before his departure.

A witness told Agence France-Press that two Rolls-Royces and one Mercedes Benz were loaded on to a Chadian cargo plane, while others await shipment. The source said 10 cars were earmarked for future shipment. Diplomats and others familiar with the matter confirmed the collection included a Bentley, Land Rovers, a red Mini Cooper and another Mercedes.

Jammeh’s entourage struggled to choose between the two larger Bentleys or three smaller cars, according to the source, before eventually opting for the Mercedes and the Rolls-Royces on the night he left the country. “They were trying to check which one fits. If they took the bigger cars, they could only take two,” he said.

Alex Vines, the head of the Africa Programme at London thinktank Chatham House, said a key lesson was the importance in west Africa of “youth and civil society pushing for change”. He added: “This played a role in Nigeria and Ghana and now Gambia … technology has helped.”