Wed 28 Jun 2017 By Tola Mbakwe Eritrea has stepped up its crackdown on Christians in the country, according to a Christian charity which has now launched a campaign opposing the persecution. Release International said Eritrean security forces 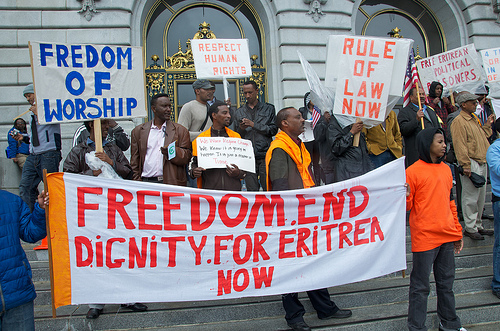 Eritrea has stepped up its crackdown on Christians in the country, according to a Christian charity which has now launched a campaign opposing the persecution.

The charity is urging Christians to prayer for the situation, as many believers have gone into hiding in fear that they will too be detained.

Release International partner Dr Berhane Asmelash said rounding up Christians door-to-door is a new tactic that signals a worsening of persecution against the Church.

He said: “People used to be arrested for conducting unauthorised meetings, such as Bible studies or prayers. But this is new for us when they go from house to house. They are arresting people for their beliefs, not for their actions.”

He added that authorities went from house-to-house asking people to announce their religion. If they were outside the state sanctioned Lutheran, Catholic, Muslim and Orthodox faiths, they were arrested.

He said: “Children who are too young to be separated from their mother’s face being brought up in jail unless their parents are released. They include a two-month old baby.”

In its new campaign, Release International has asked Christians in the UK and Ireland to download and sign a postcard calling for the prisoners to be set free, and send it to the Eritrean Embassy in London.

Paul Robinson, the CEO of Release International Robinson added: “The postcard urges the immediate and unconditional release of all Christian prisoners of faith, many of whom have now been detained in jail for ten years or more. These prisoners are law-abiding citizens who provide no threat to your government.”

Robinson likened Eritrea to “one giant prison where hope has disappeared and where the majority of people are denied simple freedoms, basic human dignity and human rights.”

According to Release International, in 2002 Eritrea outlawed many Christian denominations and shut down Evangelical and Pentecostal churches. Christians who refused to renounce their faith were jailed indefinitely without trial.

Tola Mbakwe is a multimedia journalist for Premier.