I'm drinking a cup of tea from an X-Factor mug, staring at a shop sign scrawled on a piece of plastic: "chicken and chips". Written like that, I could be at home in east London. 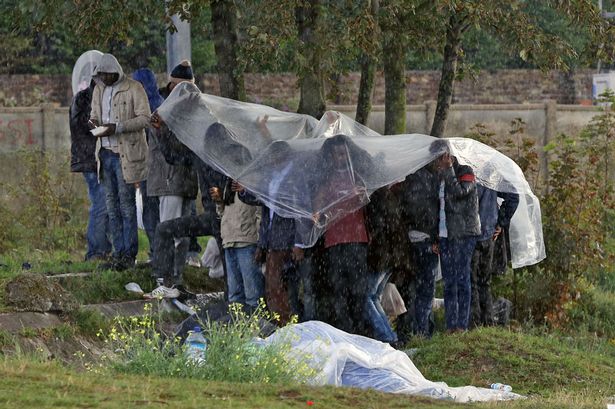 I’m drinking a cup of tea from an X-Factor mug, staring at a shop sign scrawled on a piece of plastic: “chicken and chips”. Written like that, I could be at home in east London. But this isn’t Hackney or Tower Hamlets. This, as a young man in jeans says as he walks past carrying a bucket of water, is the Jungle.

The Jungle, of course, is the refugee camp on the sand dunes outside Calais, home to over 4,000 migrants, many of whom have spent months if not years getting across Europe from Afghanistan, Eritrea, Syria and Darfur. Their route is a Magna Doodle of border crossings, internments and imprisonment that ends here: a place to stare across to the white cliffs of Dover, to sleep under tarpaulin, overlooked by a motorway bridge, the smell of human shit never far away.

For many British people, even those well-meaning enough to take to the streets with a Refugees Welcome placard or to donate to an Amazon aid list, the refugees living in camps like the Jungle, Molyvos and Sinai are seen as a congealed, non-specific mass of people. That the Jungle is, in fact, a collection of Muslims, Christians, Africans, Arabs, men, women, Eritreans, Ethiopians, drinkers, teetotalers, meat-eaters, vegetarians, dancers, cooks, atheists, children, graduates and mechanics, all living cheek-by-jowl on an old chemical dumping ground the size of a motorway service station is something we too easily forget. We forget to ask who they are. Why they’re there. What they left. We forget to ask why a 24-year-old man is sleeping beside a pile of blackberries and burnt cans, in a tent made of tarpaulin and garden twine. We forget that the guy doing keep-ups in a pair of bright red trainers once walked across a desert at night, and will later be helping his neighbour learn French. We don’t ask why a 21-year-old bi-lingual son of a government minister would risk suffocation and death by getting wrapped in plastic and hidden in a lorry, just to reach the UK.