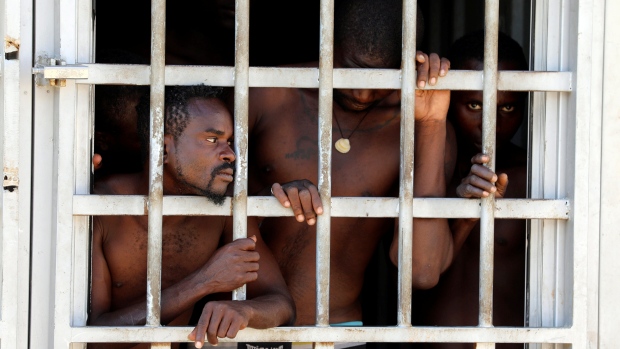 The UN human rights chief says the European Union policy of helping Libyan authorities intercept migrants on the Mediterranean and return them to Libya is “inhuman.”

He appealed Tuesday to the international community to face up to the “unimaginable horrors” the detained migrants are facing.

Zeid, a Jordanian prince, said the monitors were shocked at the sight of “thousands of emaciated and traumatized men, women and children piled on top of each other, locked up in hangars with no access to the most basic necessities.”

While UN agencies and other humanitarian groups have access to them and seek to provide health care and some food, Zeid said it was not enough because “the EU and its member states have done nothing so far to reduce the level of abuses suffered by migrants.”

“Italy is the only country in Europe with a decent migration policy,” Gentiloni said. “We’re proud because we don’t build walls or close ports.”

But it was Italy that struck a deal with the UN-backed Tripoli in February, which was endorsed by the whole of the EU, aimed at blocking migrants in Libya, much as the EU deal with Turkey did last year.

The agreement has brought migrant sea arrivals down dramatically in recent months.

This year there have been 115,000 sea arrivals in Italy, down 31 per cent from last year, official data from Italy’s Interior Ministry show. In October alone arrivals dropped by 76 per cent from a year earlier.

Sudanese citizens represent the largest proportion at Libyan camps, according to a UN report, their numbers reflecting both those who sought to work in Libya for a limited period of time and those who aimed to cross into Europe. Eritrea and Ethiopia citizens are also heavily represented at the camps.