The Italian Ministry of Foreign Affairs confirms that Yemane Gebreab, the right hand of the Eritrean President, has been attacked in Rome. The attack took place on July 5, but the identity of the victims was 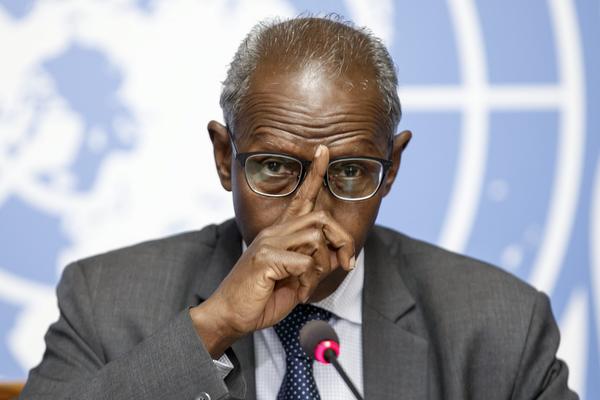 The Italian Ministry of Foreign Affairs confirms that Yemane Gebreab, the right hand of the Eritrean President, has been attacked in Rome. The attack took place on July 5, but the identity of the victims was hitherto kept secret by the Italian and Eritrean authorities.

NEWS – The attack on Eritrea’s second man Yemane Gebreab and Pietros Fessehazion, the Eritrean ambassador in Italy, took place in the aftermath of an Eritrean Festival organized in Rome on July 1st and 2nd. On July 5, around 23 pm, the diplomats and their driver were attacked after visiting Eritre’s restaurant Massawa on Via Montebello. Two Eritrean refugees attacked the group with a knot with iron points. One of them was still detained that night. The second man was picked up a few days later. Both will be prosecuted for attempted murder, the Italian newspaper reports La Repubblica .

Both the Italian authorities and the Eritrean government tried to stop the attack on Gebreab in the doom. The Eritrean embassy in Rome reported the attack on the ambassador. The ambassador wrote a short thank you note for all the support, but repented with no word about the other two victims: Gebreab and the driver.

In the process verbally written by the Italian police, only the name of Pietros Fessahazion, the Eritrean Ambassador, is mentioned. The data of the other two victims are not recorded in the process verbally. “That’s very unusual,” even an involved policeman in Rome told OneWorld and Argos.

A reporter of La Repubblica asked questions to the prosecutor and to the police. Both agencies did not want any cooperation.

That the Italian authorities now confirm that the attack was also directed against Yemane Gebreab, is due to Jasper van Dijk (SP) Chamber Questions . On August 22, Minister Koenders of Foreign Affairs replied: “The Italian Ministry of Foreign Affairs has confirmed that, on July 5, the Eritrean Ambassador and Presidential Adviser Yemane Gebreab have been attacked by two men with a pointed knot when leaving an Eritrean restaurant In rome

About the injuries of Gebreab there is clarity. “The incident would have been less serious than the Italian media mentioned. Only the ambassador’s driver has been treated in the hospital. The ambassador and presidential adviser would be brave, according to it(Italian, Red .) Ministry, have only become slightly injured, “ says Minister Koenders to the Lower House,

The Italian media reported that one victim of the serious injury injury had been hospitalized. He would have a broken cheekbone, and have to stay in the clinic for 22 days. It is not for nothing that both attackers are charged with attempted murder.

The Policlinico Umberto 1 hospital said to OneWorld and Argos that on July 5 several men of Eritrean origin were introduced. According to sources involved in the research, Gebreab would then be transferred to another clinic. This clinic did not want to confirm this if requested.

Famous suspects say that the statement by the Italian authorities is not correct. Gebreab is seriously injured. They collect money to cover the costs of the suspects.

Tension within the Eritrean community

Yemane Gebreab was in Europe for visits to various Eritrean festivals. He was also expected as a speaker at the Eritrean Festival Holland in Rijswijk (14-16 July). The municipality of Rijswijk contacted the police and the National Coordinator of Terrorism and Security.

In April, Gebreab’s attendance at the YPFDJ conference in Veldhoven led to demonstrations of Eritrean refugees. (PFDJ is the only authorized political party in Eritrea, rescued.) They are admitted to the Netherlands because of the serious human rights violations by the Eritrean regime, and they find it unacceptable that high representatives of the same regime in the Netherlands acquire support. Eventually, the high-rise emotions led to such riots that the mayor of Veldhoven decided to ban the conference.

Since Veldhoven the battle between the Eritrean regime and the opponents has hardened. The Eritrean opposition in Europe is reinforced by the ban of the YPFDJ conference. Eritrean refugees (who have come to Europe in recent years) have joined the opposition.

After Veldhoven demonstrations against human rights violations took place at Eritrean meetings in Frankfurt and Bern. Also demonstrated at the Eritrean festival in Rome.

The attack on Gebreab must be seen in this light, say people within the Eritrean community in both the Netherlands and Italy. “Every refugee has lost someone by the Eritrean regime,” says an organizer of the demonstration in Rome. He lives in the same building as the attackers. “When the attackers heard that the representative of that regime was in the neighborhood, they were raging in anger.”

After his visit to Rome, Yemane Gebreab would travel to Eritrean festivals in Germany (Giessen, 8-9 July) and the Netherlands (Rijswijk, 14-16 July). Here he was not present. Also not at subsequent festivals in England and Sweden. This indicates, according to sources within the Eritrean community, that he was actually injured during the attack in Rome.

Last week Gebreab appeared for the first time in a public performance. He was present with the Eritrean Foreign Minister Osman Saleh at the inauguration of President Kagame of Rwanda.

Minister Osman Saleh was also expected at the Eritrean meeting in Rijswijk last July. From the letter sent by minister Koenders to the Lower House on August 22, it appears that he has rejected his visit.

According to Koenders, the Cabinet feels uncomfortable if these festivals are visited for political purposes by high-ranking Eritrean authorities. ‘

“The Cabinet has asked Minister Saleh to refrain from visiting the festival in Rijswijk,” said Minister Koenders. ‘Minister Saleh has waived a visit to the Netherlands.’

The police in Rome have now released the two suspects of the attack on Yemane Gebreab and the Eritrean ambassador. They are awaiting the criminal case under house arrest.

According to several sources within the Eritrean community, the suspects lived in Independence Palace, a refugee-cracked apartment building on Piazza dell’Independenza. Most residents of this building have a residence permit, and therefore entitled to protection. However, the Italian authorities have not arranged housing for them, so that they jointly involved this apartment building in 2013.

Last Saturday, Independence Palace was evacuated by a large-scale police action. About one thousand refugees, mainly from Eritrea, have been taken to the streets. Italian authorities have stated that shelter would be arranged for refugees who hold a residence permit. This did not happen. Hundreds of Eritrean asylum seekers have been sleeping in Rome’s streets and parks since this weekend. This morning, a Wednesday, a new police action took place, with hundreds of refugees being “removed” from the square where they were all perched.

According to some Italian politicians, the action is intended to “make an end to the crime scene”. It is unclear whether the police action was prepared after the attack on the Eritrean diplomats, or part of the hardened Italian policy towards refugees.