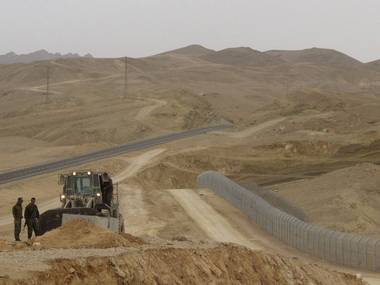 Israel is to begin construction soon on a vast detention facility in the Negev desert to house the thousands of immigrants that cross illegally into Israel from Egypt every year.

Human rights groups fear that the detention centre, the largest of its kind in the world, with a capacity to hold 8,000 migrants, will turn into a festering refugee camp, and deprive those escaping persecution at home of their rights to seek asylum in Israel.

The project was approved by Israel’s right-wing government 18 months ago, but many Israelis are uncomfortable about spurning asylum seekers from war-torn African countries given their own history as a nation of refugees.

“We’ll do all it takes to provide reasonably humane conditions,” an unnamed defence official told Israel’s Haaretz newspaper. “We all wish we didn’t have to build such a facility. But we’re in a certain situation due to certain circumstances, and we need a facility to address these needs.”

The facility, which will be built on the grounds of Ketziot prison near Israel’s southern border, will accommodate migrants, including women and children, for up to three years before they are deported to their country of origin; those from “enemy” states, such as Sudan, who cannot be repatriated, could be detained indefinitely.

The centre, which will include medical, community and sports facilities, is intended to tackle an immigration problem that politicians say threatens to overwhelm Israel’s population of 7.5 million. Speaking 18 months ago, the Prime Minister, Benjamin Netanyahu, said it was time “to stop this growing influx that threatens Israelis’ jobs and changes the character of the state”.

Every year, thousands of Africans, mostly from Sudan and Eritrea, begin the arduous journey to Israel via the arid Sinai Peninsula, a lawless territory where Bedouin traffickers extract huge fees to smuggle refugees past Egyptian border patrols.

Israel’s Interior Ministry estimates that 17,000 people crossed the Israel-Egypt border last year, many more than in previous years. They may have been spurred by Israel’s decision to build a sturdy border fence backed up with electronic surveillance equipment.

Reut Michaeli, director of the Hotline for Migrant Workers, said that building a detention centre would do little to deter those in genuine need. “People fleeing for their lives… will not stop coming because they face three years in detention,” she said.

Israel claims that most asylum seekers are economic migrants, a view reflected in the number that gain refugee status each year – less than 1 per cent of the total.

But human rights groups say that most of the Sudanese and Eritrean migrants are escaping persecution at home, citing worldwide figures from last year that claim 84 per cent of Eritreans seeking asylum, and around 60 per cent of Sudanese migrants, were eligible for refugee status.

At present, Israel has a policy of not deporting migrants back to Eritrea and Sudan because of the unstable situation there. However, it does not recognise them as refugees.