Eritrean asylum seekers are given temporary protection in Israel and are not deported, but they are subjected to intense pressure to return to their country or to another one in Africa The Population and Immigration Authority 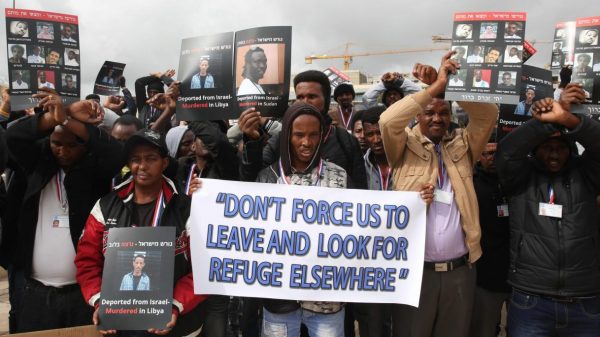 Eritrean asylum seekers are given temporary protection in Israel and are not deported, but they are subjected to intense pressure to return to their country or to another one in Africa

The Population and Immigration Authority has hired the services of the Israeli Immigration Policy Center, an organization that strives to expel African asylum seekers, to conduct a survey of the situation in Eritrea. The 49,000 shekel ($13.9 thousand) contract was approved by a Population Authority committee, with no bidding for the contract.
The center was the instigator of a law compelling asylum seekers to deposit a significant portion of their wages in a fund they can only withdraw from upon leaving Israel. Its leaders are waging an ongoing campaign aimed at deporting asylum seekers from Eritrea and Sudan, charging that they are not refugees but seekers of work.
In comments to the committee that waived the need for an official bid, the head of policy planning at the Population Authority, Merav Abrahams, said that the “center specializes in international comparative and legal research into matters pertaining to migration and asylum. They have been approached by Knesset members, research institutes and by Israeli and global media.” The center has prepared reports on research done at the Knesset, and was active in rebutting petitions against the anti-infiltration law which were struck down by the High Court of Justice.
The contract is meaningful for the policy center, whose 215,000 shekel budget consists mainly of donations. One of its founders, Yonatan Yakobovich, often provides reports from Denmark and Britain showing improvements in the human rights situation in Eritrea. However, these countries still consider Eritrean migrants as refugees. The center ignores other reports by the UN and the U.S. State Department which indicate grave human rights violations endangering the lives of anyone returning there.
Yakobovich says this is a bluff and that they come here seeking work. “They maintain ties with their families and country. Israel, with the largest Eritrean community in the West, should join the European Union in returning them to their country.”

The Immigration Policy Center’s reports leave no doubt regarding the results of research it will conduct. “Israel allows them to work and spends hundreds of millions of shekels a year on their education and health and this will only increase” says its Facebook page. “Infiltrators’ rights groups are opposing a law we initiated to ensure their departure” wrote the center following a petition to the High Court, opposing the law regarding depositing their wages in a closed fund.

The Population Authority hinted that the research was intended to facilitate the expulsion of Eritrean asylum seekers. “Given the improved situation there and positive reviews by other countries we need the survey for underpinning our policies” it explained. Present polices are based on a 2013 brief written by its legal department.
The survey will be based on legal rulings, reports by international and government organizations, as well as on other studies, says the Population Authority. “Its findings will serve as the basis for updating the treatment of requests for political asylum by Eritreans in Israel.”
The Hotline for Refugees and Migrants is attempting to revoke the contract between the Population Authority and the Immigration Policy Center, claiming that the latter has a clear political agenda. They argue that other organizations can supply the same information and that there should have been a public bidding for the contract.
Eritrean asylum seekers are given temporary protection in Israel and are not deported, but they are subjected to intense pressure to return to their country or to another one in Africa. Up to 2013 the state did not consider any applications for refugee status. It started doing so after a court order, but almost always rejects these. Only eight people were recognized as refugees, out of 8,500 applications (3,000 are still under review). This represents 0.1percent, as compared to 90 percent in the European Union.