(Reuters) - Israel has launched a forced repatriation of Eritrean migrants that amounts to a grave violation of their human rights because of the risk of persecution in their reclusive homeland, an advocacy group said on Monday. Israeli 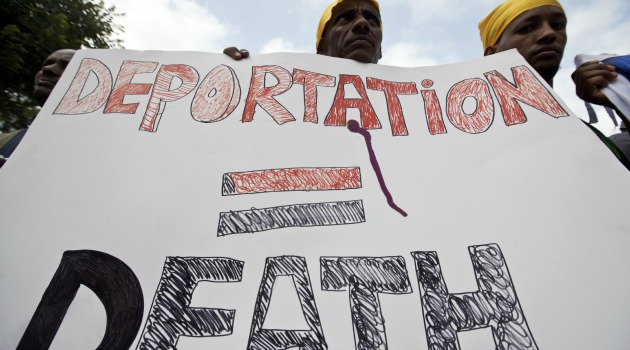 (Reuters) – Israel has launched a forced repatriation of Eritrean migrants that amounts to a grave violation of their human rights because of the risk of persecution in their reclusive homeland, an advocacy group said on Monday.

Israeli authorities have been trying to curb an influx of Africans that has ignited resentment in the poorer neighborhoods in which they dwell and compounded the fears of many Israelis about eventually being outnumbered in the Jewish state. But humanitarian groups say that forcibly returning African migrants home often exposes them to rights abuses including torture.

Some 60,000 Africans, including 35,000 Eritreans, have walked over a long porous desert border with Egypt into Israel since 2006, Israeli government figures show, and many live in gritty districts of Tel Aviv.

Israel regards most as illegal job-seekers but rights agencies say many should be considered for political asylum because of poor human rights records of their home governments.

Hotline for Migrant Workers (HMW), an Israeli human rights group, said an initial group of 14 Eritrean men were flown to Asmara, the Eritrean capital, on Sunday, after receiving $1,500 each from Israeli authorities.

They were driven to the airport from one of two desert detention centers that Israel has expanded. A law passed a year ago, and now being contested in its high court, allows the country to jail migrants it says arrived illegally.

A spokeswoman for the Interior Ministry declined to comment on the HMW report, other than to say that some “people are returning home”. She did not give their nationalities.

The men who left on Sunday were the first sent back to Eritrea, which was accused last year by the U.N. human rights chief of practicing torture and summary executions.

Israel had said in the past that it was seeking third-country destinations for Eritreans.

Sigal Rozen, public policy coordinator for HMW, a group that objects to most deportations of migrants, told Reuters the latest repatriations were “a grave human rights violation”.

Rozen said those repatriated had signed consent forms but she argued their agreement could not be seen as voluntary because Israeli authorities made clear the only way they would be freed from detention was by returning home.

She said at least one of the Eritreans had said he was a military deserter, and could face punishment at home.

A Tel Aviv-based representative of the United Nations High Commissioner for Refugees monitoring migrants’ treatment in Israel had no immediate comment. She said she was seeking confirmation from Israel of the Eritreans’ repatriation.

New York-based Human Rights Watch also condemned the new repatriations. In a statement emailed to news media, Gerry Simpson, a senior HRW refugee researcher, accused Israel of “using the threat of prolonged detention to force Eritrean and Sudanese nationals to give up their asylum claims”.

Worldwide, HRW said, around 80 percent of Eritrean asylum seekers are granted some form of protection because of credible fears of persecution relating to punishment for evading indefinite military service in Eritrea and other widespread rights abuses in the small Horn of Africa state.

Last month, an Israeli government lawyer said at a Supreme Court hearing on the legality of detaining asylum-seekers who entered surreptitiously that a deal to resettle “infiltrators from Eritrea” had been reached with a country she did not name.

At least one group of Africans was flown out of Israel to South Sudan in the past year and other migrants have been offered cash to leave voluntarily. Some 2,000 Africans are being held in the southern detention centers.

Prime Minister Benjamin Netanyahu has said that a fence which Israel completed along most of the Egyptian border earlier this year has significantly reduced the flow of migration from Africa, which hit a peak of 2,000 a month in 2011.