Islamic State footage features rant against Christian crusaders, and shows 15 men beheaded on beach and another 15 shot in the head in scrubland Islamic State has released a video purporting to depict the massacre of 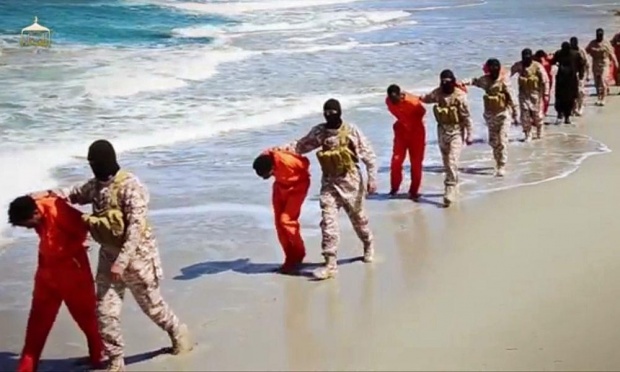 Islamic State footage features rant against Christian crusaders, and shows 15 men beheaded on beach and another 15 shot in the head in scrubland

Islamic State has released a video purporting to depict the massacre of 30 Ethiopians, the second incident of mass slaughter of Christians by the terror group in its redoubt in Libya.

The beheadings and shootings publicised by the group are the latest assault on minorities across the Middle East, thousands of whom have been forced to abandon ancestral homes to flee the group’s broadening reach in the region.

It follows a video released in February that showed the beheading of 21 Egyptian Copts on the shores of the Mediterranean, a move that prompted air strikes by the government of President Abdel-Fattah al-Sisi against the group’s stronghold in a Libya torn by civil strife that has enabled Isis’s entrenchment.

The footage, released on Sunday, depicts the brutal beheading of 15 Ethiopian Christians by masked Isis militants, their blood staining the surf on a strip of beach, as well as another scene in a desert landscape where masked gunmen shoot another 15 Ethiopians with rifles in the back of the head.

“To the nation of the cross, we’re back again,” says a masked militant in the video before the execution. “Muslim blood that was shed under the hands of your religion is not cheap.”

In the face of Islamic State’s atrocities, global inaction is not an option

“We swear to Allah … you will not have safety even in your dreams until you embrace Islam,” he added.

Ethiopia hit out at the atrocity. “We strongly condemn such atrocities, whether they are Ethiopians are not,” the Ethiopian communications minister Redwan Hussein told AFP.

The 29-minute video, titled Until There Came to Them Clear Evidence, appeared primarily aimed at offering religious justification for the targeting of Christians, saying their slaughter is permitted if they refuse to convert to Islam or decline to pay a protection tax in lands where the terror group holds sway.

It also sought to depict Christians living in areas under its control as being treated respectfully and fairly by its courts.

Other minorities such as the Yazidis have also faced mass starvation and slavery at the hands of the terror group, which has ethnically cleansed large swaths of Iraq and massacred thousands.

It has also destroyed significant portions of the ancient heritage of Iraq’s Assyrian community, Shia and Christian shrines that Isis says are polytheistic and contrary to its brand of puritanical Islam.

The group’s rampage has all but ended millennia of coexistence between Iraq’s diverse communities.

The video, which features the same high production values common in the group’s media releases and computer generated scenes of old Islamic battles, begins with a recounting of the early history of Christianity and an outline of the schisms that led to the creation of the Coptic, Eastern Orthodox and Roman Catholic churches, as well as the development of Protestantism.

The video condemns the doctrine of the Trinity as a form of apostasy, and brands Christians as infidels. The narrator says Christians must pay the “jizya” – a protection tax imposed on them during the early Islamic conquests in Asia and Europe, or face slaughter.

An Isis cleric, Abu Malik Anas An-Nashwan, offered religious justifications for fighting non-Muslims, saying it is permitted if they refuse to convert to Islam or pay the protection tithe.

He says in the video that Christians in Raqqa, Islamic State’s capital in Syria, have refused to convert but pay the jizya to the group, and its sharia courts rule on their disputes with Muslims, and features interviews with Christians living in areas under the group’s rule who claim to be living in safety.

An-Nashwan sought to justify the forced exodus of Iraq’s Christians, saying they refused to meet Isis representatives and the payment of the jizya. He portrayed their exodus as a mercy bestowed upon them by Islamic State, which he said chose not to slaughter them instead.

The video then shows scenes of Isis fighters destroying churches, crosses and paintings depicting the Virgin Mary, before moving on to show the massacre of the Ethiopian Christians, indicating the price of religious minorities defying the militant group’s edicts.

Many Ethiopian Christians are part of the Coptic Church, and travel to NorthAfrica seeking employment or as a transit route to Europe.

“We tell Christians everywhere that the Islamic State will spread, God willing,” An-Nashwan says at the end of the video. “It will reach you even if you are in fortresses. Those who embrace Islam or jizya will be safe. But those who refuse … will have nothing from us but the edge of the sword. The men will be killed, the women and children enslaved, and the money seized. That is Allah and the prophet’s judgment.”