Recently on 03/04/2019  Isayas’s media (Eri Tv)  from Asmara accused the three countries (Sudan, Qatar and Turkey) of working against Eritrea and its peace agreement with Ethiopia, by supporting the anti Isayas opposition party in Sudan. A 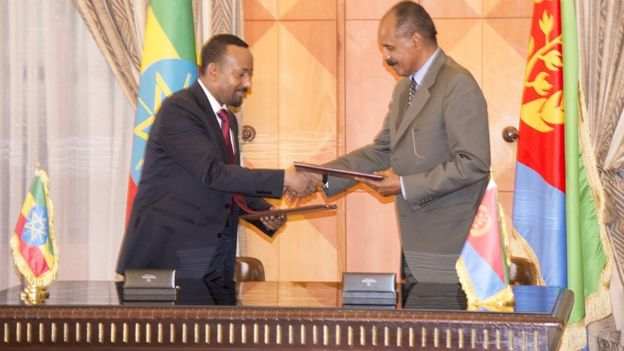 Recently on 03/04/2019  Isayas’s media (Eri Tv)  from Asmara accused the three countries (Sudan, Qatar and Turkey) of working against Eritrea and its peace agreement with Ethiopia, by supporting the anti Isayas opposition party in Sudan. A year ago on 14/05/2018 Isayas’s media from Asmara accused Dr Abi for visiting Khartoum to meet Bashir on agendas of supporting anti Isayas groups in Sudan. At that time the news further explained that, Dri Abi and Bashir agreed to do all necessary steps to create conducive environments to the oppositions near the border areas neighbouring Eritrea.
Soon after Isayas Afewerki did not take time to applaud Dr Abi and make his intimate friend though accussed him of otherwise. As they claim Eri Tv is the only media which serves the truth, then Dr Abi should be blamed for creating those groups a year ago with Al Bashir. This abnormal behaviours by Isayas is naturally ignored by the Eritrean people, as used to it for centuries. However it can have serious consequences when dealing with the neighbouring countries. I have strong believe countries should not dictate the political transformation of other countries, neither Ethiopia nor Turkey or Sudan should interfere in the political processes in Eritrea.
Why is Isayas publicly accusing the tripartite countries now? Moreover, why is he dragging Ethiopia to his mess?
Isayas Afweri’s actions and desires since the friendship with Dr Abi was so abrupt, tended to quickly implement all the secret plans in short time before even the people realised it. However, due to the situation in Ethiopia, Dr Abi was not able to materialize it aside signing the agreements. Isayas Afewki’s may have thought Dr Abi has all the power and support to implement their secret agreements quickly but it is not the case and this has created uncomfortable environment to Isayas Afewrki. The delay in implementing their agendas, as both thought would happen, has led to awaken the Eritrean people in diaspora as well as inside Eritrea. Followed by this many question raised by all the people who seek  justice  which is the majority of Eritrean people in the diaspora and challenged the PFDJ (Isayas Afewerki) supporters to clarify the contents of the agreements secretly signed by Isayas and Abi. This also led many if the  the PFDJ’s supporter to switch their stand and ask questions to the government authorities and ambassadors regarding the details of the agreement. Currently the majority of the Eritrean people in the diaspora and inside Eritrea are putting unrelenting pressure to Isayas Afewerki.
The other issue that hindered in implementing their plans with Dr Abi was, the hardening of the TPLF in Ethiopia. Although Isayas publicly tried many ways to demonise and undermine them, putting them at odds with the federal government, none worked and now he has to invent something new to implement his deep desire.
Authoritarian leaders usually try all means to stay in power and the last thing they do is to raise issues that scares their people. The new card he is trying to use, is meant to scare Eritreans and Ethiopians and the international community as a whole and get relief to implement his power thirsty agendas.
This new scare tactic has at least three aims in my opinion;
– to detour the ongoing powerful “YIAKL = Enough” camping by Eritreans inside and outside;
-to entice the international community into his support and
-to persuade the Ethiopian government to interfere openly and come to his rescue.
Shouting Islamic extremists are coming is a good scary tactic that triggers the international community on the hope that they will ignore or give a blind eye for what he is intending to do, to tighten his grip on power or oppress the Eritrean people.
Some may say it is far a geopolitics of the region, the red sea is quite known for being a place with conflicting interest of the super powers however, we need to know as well many countries handled wisely and managed to live against similar situations as us. I understand this and Isayas has already corrupted his hands  by interfering this way or another way. However Isayas Afewrki agenda overall is nothing than something to keep him in power in any way.
The new accusations towards Sudan, Turkey and Qatar that they are conspiring against the Asmara regime and its peace agreement with Ethiopia could bring support from the Ethiopia and Dr Abi. The main aim for all this drams could be ways of inviting the Ethiopian military boots into the Eritrean territory in the pretext of support.
Based on information we hear and observe coming out of Eritrea, Isayas might have planned to bring military support from Ethiopia for various many reasons. Since this can be difficult to do it without any concrete reason, he has to deceive the Eritrean as well as the Ethiopian people. Any means to put the boots of the Ethiopian soldiers or military into the Eritrean territory may be is the new trick. Since the regime has lost trust of its own soldiers, no wander to conspire any possible means and theories that helps him bring Ethiopia in to his agenda to prolong his power. Hence, we might expect from now onwards the regime in Asmara to instigate conflicts, cry loud and ask military support from Ethiopia. This way he can have mercenaries loyal to him and protect him and his power. Eritrea could end up into another deep dilemma.
My fellow Eritreans be alert for all the snare tactics of the Isayas’ as we already know nothing good comes  out of him,
I hope as well the Ethiopian people understand the situation in holistic manner and work to strengthen the Eritrean people against any adversaries rather than seek reasons that empower a dictator.
Peace to Eritrea and all East Africa