AFP/  DONGOLA (Sudan)  - Hundreds of exhausted illegal migrants reached the safety of a northern Sudanese town Saturday after 10 people died when human traffickers abandoned them in the desert. A convoy of trucks escorted by armed security forces 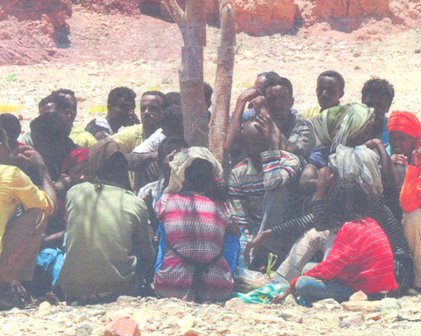 AFP/  DONGOLA (Sudan)  –
Hundreds of exhausted illegal migrants reached the safety of a northern Sudanese town Saturday after 10 people died when human traffickers abandoned them in the desert.
A convoy of trucks escorted by armed security forces delivered the migrants to Dongola after a journey of hundreds of kilometres (miles) following their rescue on the Sudanese-Libyan frontier by troops from both countries.
Sudanese officials announced the rescue Wednesday, saying traffickers had dumped their victims in the border region’s scorching desert, where 10 died.
Troops initially found about 300 hungry and thirsty victims, but they later came across even more.
“The total number rescued is 600, first 309, and then they found another 300,” Abdul Latif Abdullah, the Sudanese Armed Forces commander in Dongola, told AFP.
Women and children were among the survivors who reached the town under the escort of Sudanese and Libyan soldiers.
Most of the victims appeared to be Ethiopian or Eritrean, but there were some Sudanese as well.
An eight-year-old girl in the group was taken immediately to hospital, officials said, while the others first stopped at an immigration facility before they too were to receive medical checks.
One wounded migrant, shoeless and with dirt-stained pants, had to be carried from one of the trucks.
According to the UN High Commissioner for Refugees (UNHCR), an average of 600 refugees from Eritrea make their way to neighbouring Sudan each month.
“Some of them try to go through Egypt. Some of them try to go through Libya” and then across the Mediterranean Sea, said a source familiar with the situation.
Economic migrants or refugees often rely on people smugglers.
The UNHCR did not have access to the northwest border region.
“Should the army relocate this population to areas accessible to UNHCR we would want to have access to the population to assess their status,” said the agency’s Sudan representative, Mohammed Adar.
“Should they be refugees, we would stand ready to provide support,” in cooperation with local officials, Adar told AFP.
Human Rights Watch accused Egyptian and Sudanese security officers in February of colluding with traffickers who allegedly held Eritrean migrants for ransom and tortured them.
str-it/jk
Watch Video