The tyrant as the son of the Eritrean revolution was given all support and good advices on how to improve his transitional governance of the country.  But the day he decided to crack down on 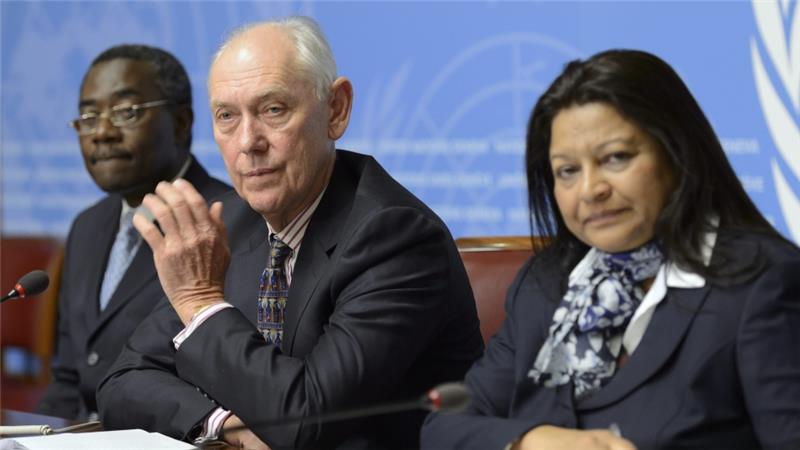 The tyrant as the son of the Eritrean revolution was given all support and good advices on how to improve his transitional governance of the country.  But the day he decided to crack down on all innocents including the elderly, the G-15, the journalists and all pro-democracy elements, the tyrant revealed his true inner wicked characters with no concern about the Eritrea of tomorrow making it a country where political innocence is not protected.  Ever since the tyrant’s betrayal of trust and backstabbing of his comrades, the country has become plagued by deception, false promises and abuses inflicting on the Eritrean people pain, outrage, hate, vengeance, and mistrust.  Soon Eritrea has become a country where the worst systematic crimes against humanity are committed.  Surely, the country’s lack of rule of law led to half of its population to flee the country, while the remaining half either in open air prison or in secretive container or camp prisons.  By the time the Human Rights Council (HRC) established (in June of 2014) the Commission of Inquiry on Eritrea (COIE), the tyrant planned and weaved ways and means of silencing most victims of his crimes not to come forward or to become reluctant.

For the COIE, to investigate for the hard truth, it needed to distinction between the truth and the falsehood regarding the victims’ claims and the tyrant’s counterclaims.  To do so, the commission, based on the victims’ accounts, prepared its investigative interviews and questions to be directed at those accused of the criminal offenses in Eritrea for their admission or denial.  But the tyrant denied the commission entry to the country.  Thus, the signs of level of evidences were raised higher and accordingly the case that was on hold presuming the tyrant “innocent until proven guilty” changed to presuming the tyrant “guilty until proven innocent.”

As a result, the truth side was not in dark because the victims were open and accessible, while the falsehood side remained in dark because the victimizer denied giving green light to the COIE representatives to conduct their investigation of the claimed crimes against humanity.  The tyrant remained defiant because the signature of his tyranny is engraved on every department of the system and that was sufficient to provide evidences of the crimes the tyrant was accused of in that he imposed inhuman practices in Sawa and all Yikalos inflicting widespread cruelty and wickedness.  As the widespread systematic abuses of the tyrant worsened in excessiveness they became unusual and urgent-inviting-targets for COIE to investigate them so as to find out how hellish Eritrea has become under the tyrant’s rule.  Accordingly, in the eyes of the world, the tyrant’s destructive defiance was worse than the unhealthy political arrogance of North Korea.

What makes Eritrea worse than North Korea is the excessive abuse of power.  The tyrant took away from all Eritreans their freedom of choice and instead imposed on them wrong and hasty choices.  That was the reason found to be that every Eritrean defying the tyrant’s shoot to kill policy was aware that organ harvesters were awaiting and, if avoided, the swallowing deserts and high seas were worse.  Indeed, the level of coercion reached the sky in that wives in the presence of their husbands dared say that there was no man like Isayas.  Additionally, the tyrant’s agents have standing permission to abuse any person anywhere any time, be it inside Eritrea or in the country’s embassies, outside Eritrea.  The people for their safety and the safety of their family members are forced to pay dearly, in material and life.  And, the perpetrators of the crimes committed, upon hearing about the COIE’s report, are resorting to various inhuman means of escaping accountability for the crimes they committed by eliminating the potential witnesses or by applying methods of silencing the witnesses, mostly through blackmailing.  The perpetrators’ hate of the potential witnesses has become ammunition for disappearances and other illegal actions on the potential witnesses.  That’s why the COIE sought urgent salvage of all Eritreans, be it inside Eritrea or outside Eritrea.

Upon the world’s declaration that the tyrant was guilty until proven innocent, the tyrant and his generals have begun to experience nightmares and feel the despair and fear just like their victims who went through and are going through similar hurdles.  His Diaspora supporters, too, are having sleepless nights because they know well about the maxim that “if one cannot save the endangered people through the door, the alternative is to save them through the window.”  The COIE knocked the door and waited long for the door to open and start its investigation.  As the last resort, the COIE can focus on all pro-tyrants and members of his party considering them as the only open doors for its investigation.  The COIE can obtain the UN’s approval or no objection to considering the diehard supporters and party members of the tyrant as the only available and open doors to start with the COIE’s investigation.  Besides, that approach would be safe and less adventurous to the members of the commission to carry out their investigations.

The pro-tyrant’s condemnation, although their voices may not have weight, and their criticism of the COIE’s report and its measures to ensure that all victims of the tyrant are compensated well, their moves are sufficient to prove that these diehard supporters and members of the tyrant’s party are/were involved in the crimes committed.  As admittedly claimed by the tyrant and those diehard supporters and party members as part of the tyrant’s thousand eyes, ears and arms, their involvement in the crimes committed against humanity in Eritrea can be direct or indirect by spying or passing information.  The investigation can be left for experts on methods of linking facts in chains of evidences on the crimes committed by the octopus-like tentacles spread all over the world to reach, control and manipulate innocent Eritreans, whenever and wherever they are.  The COIE can prepare similar investigative interviews and questions that can be directed at all those active and diehard supporters of the-tyrant (members of PFDJ, YPFDJ, as well as those lately added to the list by some justice seekers that include Keleta Kidane, Mahmood Saleh and the webmaster of Meskerem-Dot-Net).  The list may also include all those protectors and defenders of the crime perpetrators in Eritrea.

Some of the tyrant supporters including Keleta Kidane, Mahmood Saleh and the webmaster of Meskerem-Dot-Net were wondering as to how and why the Somalis became more Eritreans than the Eritreans themselves in fueling the Eritrean human rights case under human rights social justice theme that all Eritrean lives matter.  What Keleta Kidane and his group are missing is that long before the tyrant of Eritrea played the role of both arsonist and fireman in Somalia, in which he was accused for financing and supporting AlShebab of Somalia, the Somalis were the only people who cared for the Eritreans in exile and issued and provided them with Somalis passports.  If they need be reminded, these people (Keleta Kidane and his group) should know that the relationship among the Somalis, the Eritreans and the Libyans goes back to the root of colonization in Africa.  The three countries were colonized by Italy and their fate was the same after the defeat of the Italians in the 2nd World War.  Moreover, the Somalis and the Eritrean justice seekers as one group are inversely related to the Eritreans who support the tyrant.  In this regard, again, if these diehard supporters of the tyrant should be reminded, the Lampedus tragedy and other similar tragedies are cheerful memories to the supporters of the tyrant including Keleta Kidane, Mahmood Saleh and the webmaster of Meskerem-Dot-Net, while to the Somalis and the Eritrean justice seekers those tragedies are equally painful memories.  So also when the COIE successfully delivered its findings, both the Somalis and the Eritrean justice seekers expressed their cheers while the pro-the-tyrant groups expressed their shocks, fears and pains for referring the case to the African Union.  As to the Djiboutian government, it had reason to open its eyes ever since the cunning game the tyrant played as both arsonist and fireman in the Sudan as to weaken the central government and make the Sudan his playground.  The Djiboutian government and its people learned from the Sudanese weakened government by the dirty tricks, plots and intrigues of the tyrant and, as the result, they (the Djiboutian) don’t trust the tyrant despite the huge sum of bribe offered to them by this Arab country like it did to the Sudanese government in order to neutralize the Sudanese stand against the tyrant.

When the Eritrean human rights case was brought up and sponsored by the Somali and the Djiboutian representatives at the International Human Rights Council, the tyrant’s representative said that the Somali and Djiboutian representatives were pushed by Ethiopia and the USA to do so.  But when the case was wrapped up accusing the tyrant of being guilty until proven innocent due to denying access to the scene of crimes, the USA stepped up saving the tyrant from being referred to immediate legal action at International Criminal Court.  Instead, the case was referred to the African Union.  As usual, the tyrant and his supporters were slow to grasp the referral decsion in that by referring the case to the African Union, the tyrant and his accomplices are not only meant to be tried by an African court, like the Chadian dictator – Hissien Habre, but also they will be locked between the jaws of African Union and the angry Eritrean justice seekers.  Those two (the AU and the Eritrean justice seekers) long waited seeking to bring the tyrant and his accomplices to justice for 25 years.  Wait till you see it – just watch from where you are, you will feel what may when you see these two (the AU and the angry Eritrean justice seekers), as Africans, who have tough jaws and teeth start grinding the tyrant and his accomplices to pieces.

While stating that the COIE report of findings

was a huge victory for all those victims of the tyrant,