Have your say: Is safe exit to Isayas of Eritrea worth considering?

The recent Gambian crises has been a good lesson to many Africans and should be debated throughout the continent. The reason this needs to be debated is the continent is facing with aging authoritarian leaders 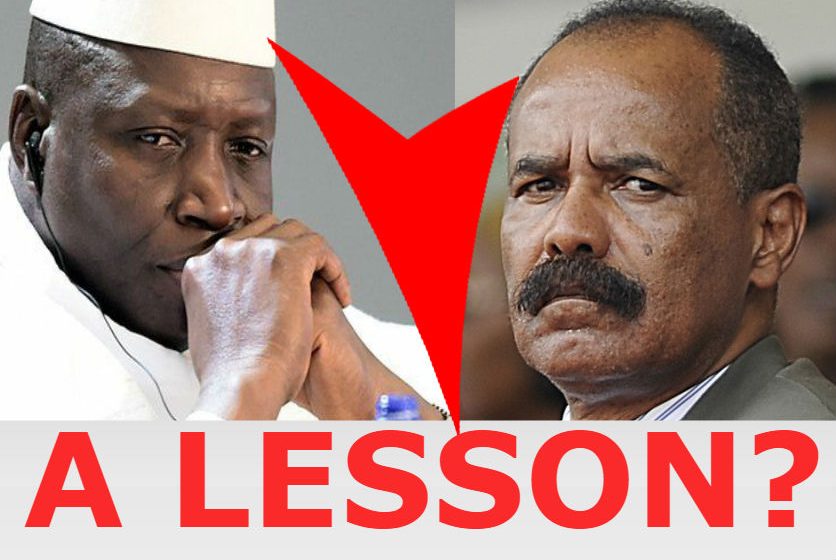 The recent Gambian crises has been a good lesson to many Africans and should be debated throughout the continent. The reason this needs to be debated is the continent is facing with aging authoritarian leaders who cling to power and are insecure, and fear of retributions from the people or their opponents once they leave power. If we see African countries from north all the way to south, it is full of authoritarian regimes from Albert-Bernard Bongo of Gabon, Teodoro Obiang Nguema Mbasogo of Equatorial Guinea, Idriss Deby of Chad, Ismaïl Omar Guelleh of Djibouti, Denis Sassou Nguesso of Congo, Abdelaziz Bouteflika of Algeria, Omar H.A. Al-Bashir of Sudan, Robert Gabriel Mugabe of Zimbabwe, Paul Biya of Cameroon, José Eduardo dos Santos of Angola, Yoweri Museveni of Uganda, Isaias Afwerki of Eritrea, Paul Kagame of Rwanda,Abdelaziz Bouteflika of Algeria, Salva Kiir Mayardit of South Sudan,

Jammeh of Gambia came to power through a military coup and cling to power for centuries and even used to boast by vowing to reign in power for a billion years. Jammeh like many other African leaders has deceived his people by pretending as a religious figure, who has a higher calling to save the Gambian people, but he had no internal convictions nor any moral compass to lead people.

In Africa, the authoritarian leaders fear election and election related processes like implementing constitutions and abiding by rule of law. Some entertain their humble people by conducting an election dramas and often succeed in doing so. But for some leaders those types of snare tactics won’t work and even costed them a lot, losing their long lasting reign and is a live trap like what happened for Gambia’s president. Often those leaders conduct non-transparent elections either to legitimise their continuity in power by seducing poor people or due to the pressure from international communities to do elections. Jammeh also conducted those elections for any of those reasons, however, the recent election was not like the other once. Immediate after the election he conceded defeat, without realising he is in a big trouble and it is going to cost him his billion years reign. Similar elections in several African countries ended up manipulated by the ruling regimes either during voting or counting and they guarantee their continuation in power by intimidation and use of force.

Gambia’s recent election was a different one Jammeh was not able to manipulate the result, who knows he was busy collecting the gold and silver of the country and did little attention to the developments in the election processes. Here comes a million dollar question to all Africans; can an authoritarian ruler leave power peacefully?

Or is it worth considering a safe exit for all the exciting dictators in Africa for the sake of peace and to avoid bloodshed, displacement, and more social crises that come with unseating them militarily? Gambia’s recent events teach us a lot, and the regional group The Economic Community of West African States (ECOWAS) leaders should be applauded for their effort and for trying all windows of peaceful negotiations. If it was not for the wisdom of those leaders the country could have ended up in a disaster and in a lot of bloodsheds.

The safe passage to president Jammeh was a good negotiating deal and resulted in immediate peace and hope among the people. Though some still disagree on the deal and may choose to see him caught in Gambia and put in jail. After noticing all the atrocities and human rights abuses and selfish desires of these dictators one cannot deny the voice those who oppose the deal but we need to thoughtfully examine the consequences if not succeeded. History thought us a lot, in many African countries a military intervention or military coup to unseat an authoritarian ruler have had a negative outcome with the emergence of either of the following; a new young brutal dictator, an authoritarian party, or a family member of the ousted dictator his son or daughter or brother. Hence what had happened in Gambia can be agreed as a good deal to the Gambian people they are left with a democratically elected president and, peaceful transition leaving aside the issue of emptied banks. The question comes how much can we compromise?

My main idea as the topic shows is to invite everyone who reads this small introductory article to come and discuss/debate an important issue that affects all Eritreans. The topic is;

“Is safe exit to Isayas and his accomplice worth considering for the sake of peace?”

Let us discuss and debate and brainstorm our thinking now as this will happen sooner or later.

We cannot avoid history and what happened in Gambia or other African countries will happen to us and a sense full discussion without emotion could save us a lot.