by LetsRun.com 21-year-old Geoffrey Kipsang has shown the potential to be a senior world champion, but now he’s got a world title to prove it as he won the 2014 IAAF World Half Marathon championship today in Copenhagen 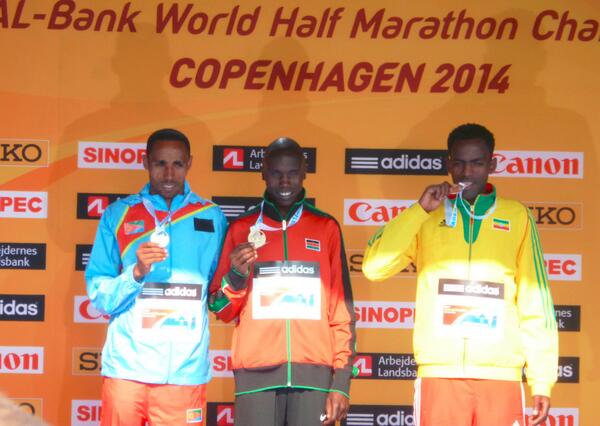 21-year-old Geoffrey Kipsang has shown the potential to be a senior world champion, but now he’s got a world title to prove it as he won the 2014 IAAF World Half Marathon championship today in Copenhagen in 59:07 ahead of Eritrea’s Samuel Tsegay and Ethiopia’s Guye Adola, who both ran 59:20.

Finishing fourth was 5-time world half marathon Zersenay Tadese of Eritrea, who was unable to win a record sixth individual World Half Marathon title today, but it was a great day for tiny Eritrea nonetheless as the tiny country of just 6 million plus won gold in the team competition as the top three Eritrean runners all broke an hour. With Tsegay in second (59:20), Tadese in fourth (59:37) and Nguse Amlosom (59:37) in fifth, Eritrea’s top three man total time of 2:58:59 was by far the best on the day.

If more than three men scored, Eritrea still would have won the team title as their two other finishers weren’t far behind –Ghirmay Ghebreslassie (7th 60:09) and Samson Gebreyghannes (8th 60:12).

Quick Take #1: Kipsang is the real deal. The junior world xc champ in 2011, he might have been favored to win senior World XC gold last year in Poland but he didn’t run the race as instead of running the Kenyan Trials he dominated the RAK Half Marathon. He wasted no time running a full marathon last year (follow the $) running 2:09:12 in Rotterdam in his debut. Since then, he’s run 2:06:12 in Berlin and 2:07:37 in Tokyo last month. If you want to know why Kenya struggles to win medals in the 10,000 on the track, it’s because young talents like Kipsang are on the roads. Remember at 18 in 2011, in the span of 8 days, he ran his track prs of 27:12 at Pre and then 13:12.23 in New York.

59:07 without a rabbit is very impressive. His next goal? The WR. ”For now, my main goal is to prepare well to run the world record in the half-marathon,” he told reporters.

Quick Take #2: Think about Eritrea’s performance for a minute. In a single race, the country of 6 million had five men run 60:12 or better on a non-aided course. The US’s population is more than 50 times bigger at 313 million plus and in the history of the US only two men have ever run under faster than 60:12 – Dathan Ritzenhein 60:00, Ryan Hall 59:37 (Todd Williamsran 60:11 on an aided course).

59:07 is the 4th fastest time in the history of World Half marathon championships. It is also the second fastest winning time in history.
Five runners broke 60 minutes in the World half marathon, but in 2007 record 7 runners broke 60 min.
ERI won first team gold medal in World Half marathon snapping KEN’s team winning steak at six. After seven straight team silver ERI finally won team gold.
Best-ever-marks-for-place for 8th and 9th in the World Half Marathon Championships were set.
Samuel Tsegay and Guye Adola became the 109th and 110th, respectively to crack 60 minutes for half marathon