Football : RSF publishes “game sheets” for African football tournament showing the level of freedom of information in the participating nations 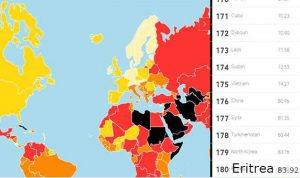 As the African Cup of Nations football tournament (AFCON) is about to start,  Reporters Without Borders (RSF) publishes “game sheets” showing the level of freedom of information in the participating nations and highlighting the biggest fouls against this freedom.

Some of the countries taking part in the tournament, to be held from 14 January to 5 February, are ruled by leading press freedom predators and have distinguished themselves by the skill with which they abuse journalists and media outlets.

They include the host nation, Gabon, which imposed a complete blackout on the media, communications and social networks during the crisis that followed last August’s presidential election.

Uganda has been working on its technique all year, roughing up journalists during demonstrations by opponents of President Yoweri Museveni’s election.

The Democratic Republic of Congo has the deadliest record, with 12 journalists murdered with impunity in the past ten years, while Egypt is one of the world’s biggest prisons for journalists, with 28 currently detained, and is in the process of tightening the net of its media legislation even more.

“The public’s enthusiasm for such events must not make us forget another reality, the much grimmer one of abuses against journalists and media outlets by many of the participating countries,” RSF secretary-general Christophe Deloire said. “So we are using the AFCON to issue red cards to certain African countries and leaders who are press freedom predators.”

The tournament kicks off on 14 January with a game between Gabon, which is ranked 100th out of 180 countries in RSF’s 2016 World Press Freedom Index, and Guinea-Bissau, ranked 79th.

Follow RSF’s campaign on this page, which will be updated during the tournament.