Source: Content partner // UNHCR MAI-AINI REFUGEE CAMP, Ethiopia, March 19 (UNHCR) - Gebre* knew the dangers as well as any 13-year-old. He understood that to be captured fleeing his country by the Eritrean border guards 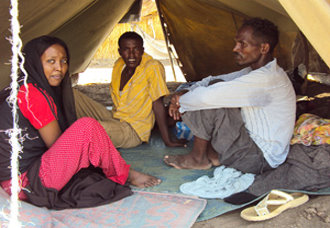 MAI-AINI REFUGEE CAMP, Ethiopia, March 19 (UNHCR) – Gebre* knew the dangers as well as any 13-year-old. He understood that to be captured fleeing his country by the Eritrean border guards could mean jail or worse. And anyone taking the route to Ethiopia via Sudan could be held for ransom.

But what was certain was that soon Gebre would be old enough to serve in the Eritrean military, where service is tough and lasts for decades. He discussed the matter with his family and together they agreed that he was better off risking a litany of woes than a life of lost opportunity.

And so the night after his family paid 25,000 Eritrean Nakfa (US$1,650) to smugglers, he stepped into the boot of a car and was driven across the border to Sudan. From there, he crossed into Ethiopia and reached Mai-Aini camp.

Like other Eritrean refugees here, Gebre sees Mai-Aini as a way station to bigger and better things. Three years after his arrival in Ethiopia, he is in touch with his grandmother to sponsor his residency in Canada, where she lives. “I’ve already started the process,” says the 16-year-old. “I’ll be there soon.”

There are currently 1,124 unaccompanied or separated minors in Mai-Aini camp. Some arrive because they are too young to understand the consequence of crossing a border between two hostile states or because they feel they have no opportunities left at home. Others are looking for siblings who have themselves fled earlier.

Close to 4,000 refugees have left the camp and continued on to neighbouring countries since its establishment in 2008. Recently, four drowned attempting to cross the Tkeze River between Ethiopia and Sudan. “[Some] people come to Ethiopia as a transit stop,” says Meleku Gutema, a UNHCR protection assistant at Mai-Aini camp. “They are looking to go to a third country, either to reunite with other family members or to get better job opportunities abroad.”

There is currently no agreement between Ethiopia and Eritrea which would allow repatriation. Informal repatriation, especially of minors, could take place through the International Committee of the Red Cross until 2009. Now this has been stopped and even messages to families cannot be forwarded.

Unaccompanied youth under the age of 17 live in a special group care section of the camp. Social workers visit every day. Each stone house, where up to six children live, is provided a daily ration of food. The youngsters often cook their own meals and make bread in a common kitchen.

Eleven-year-old Johanas* left Eritrea out of boredom and a dare. He sat with friends in his home village of Sanafa and talked about the dangers of the other side. Everyone had been told that Ethiopians regard Eritrean migrants as spies and that they would be arrested.

“We were just talking and playing with each other,” says Johanas. “They told me that I was not man enough to cross the border and I told them I was.” Now the boy longs for his mother and two younger sisters. “I need to go back,” he says. “I need my mother to sing songs to me.”

For the most part, what keeps most of the young in the camp is fear of what lies beyond the next border and the hope that relatives will come to their assistance. Smugglers and traffickers are known to ply the routes to Egypt, Israel and Libya and everyone has heard horror stories of children who left. UNHCR and the government refugee agency, ARRA, have been trying to raise awareness of the dangers.

Abeba,* 15, crossed the border with Ethiopia after walking three hours from her village. One of her girlfriends told her that she wanted to be a refugee and asked her if she would be one too. Abeba was quick to agree, mostly because she missed her sister Gidena,* 21, who had fled months earlier to Ethiopia. When Abeba arrived at Mai-Aini camp in April 2009, she found that her sister had left three months earlier for Israel.

The two sisters are in contact but Napsenet forbade her younger sibling to attempt the crossing to Israel. “She told me that if you come there illegally there are bandits. They will torture you, they will rape you,” Abeba says. “So my sister told me, ‘Don’t you go that way. It is dangerous and it is not for you.'”

Unfortunately many other unaccompanied minors will attempt to make the crossing regardless.