Ethiopian PM in Eritrea for talks

The relations between Ethiopia and Eritrea took another giant step in the right direction with the arrival of the former's leader for a meeting in Asmara on Sunday. Mr Abiy Ahmed was warmly greeted by President 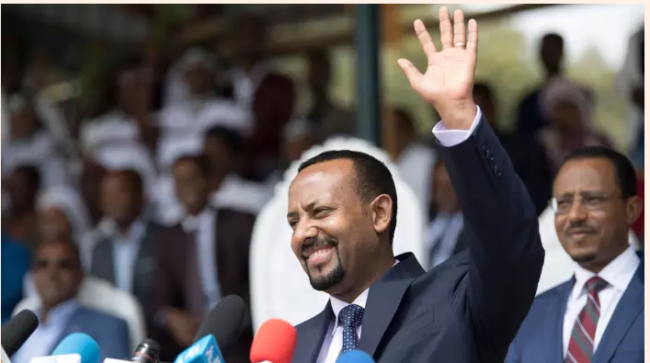 The relations between Ethiopia and Eritrea took another giant step in the right direction with the arrival of the former’s leader for a meeting in Asmara on Sunday.

Mr Abiy Ahmed was warmly greeted by President Isaias Afeworki when he jetted in for the talks aimed at repairing relations between the neighbours.

In a scene unimaginable just weeks ago, Mr Abiy stepped from an Ethiopian Airlines plane at the airport in Asmara, greeting Mr Isaias and hugging him before the pair strode off along a red carpet.

They made no comment before heading to a meeting.

“The visit is part of efforts to normalise relations with Eritrea. [Abiy] is expected to talk with the Eritrean leadership [about] how to mend fences,” Ethiopian Foreign ministry spokesman Meles Alem told AFP.

The historic meeting came after Mr Abiy’s announcement last month that Ethiopia would cede to Eritrea land along the countries’ border it occupies in violation of a 2002 United Nations-backed boundary demarcation.

Ethiopia’s refusal to implement the demarcation deadlocked relations between the two even after the end of a 1998-2000 boundary war that killed 80,000 people.

Once a province of Ethiopia that comprised its entire coastline, Eritrea voted to leave in 1993 after a bloody independence struggle.

The break rendered Ethiopia landlocked, and ties deteriorated five years later when a dispute over their shared frontier descended into war.

In office since April, Mr Abiy has pursued an ambitious reform agenda including reversing years of policy and announcing Ethiopia would abide by the 2002 boundary ruling.

The move paved the way for two top Eritrean officials to visit Addis Ababa last month, after which the meeting between the two leaders was announced.

But Ethiopia has yet to withdraw from disputed territory along the border including the town of Badme, which it controls in violation of the UN ruling.