Ethiopia Releases Thousands Arrested Since Start of State of Emergency

Ethiopia has released thousands of protesters who were detained during the ongoing state of emergency. People detained in Awash, Alage, Bir Sheleko and Tolay centers will be allowed to return home after receiving "training," according to 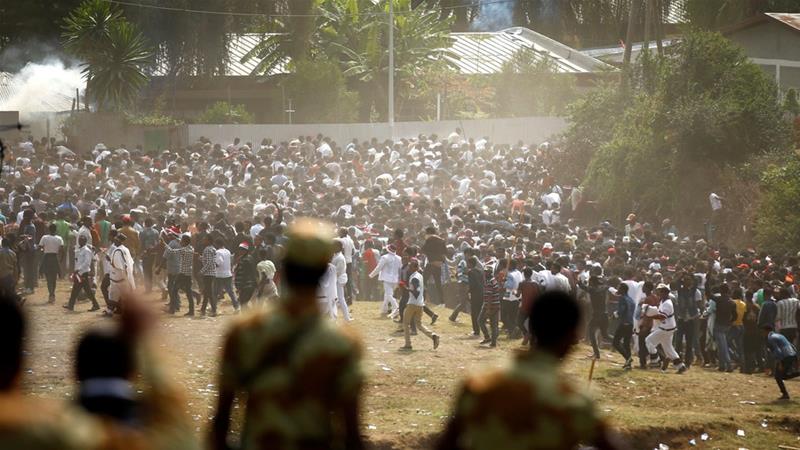 Ethiopia has released thousands of protesters who were detained during the ongoing state of emergency.

People detained in Awash, Alage, Bir Sheleko and Tolay centers will be allowed to return home after receiving “training,” according to the state-owned Fana Broadcasting Network. This includes 4,035 people released from a center in the Tolay region of southwest Ethiopia. These prison locations are unofficial centers mostly located at military camps.

Earlier this week, Ethiopian officials announced that 9,800 people arrested during the state of emergency would be released and 2,449 others would be arraigned in court.

Speaking to a group of released prisoners at Tolay, Ethiopian Prime Minister Hailemariam Desalegn reminded them they are free to protest, but not to resort to violence.

“You might have disagreements, be it with the government or government administration, and that is your right. No one can deprive you of this right. It is a right enshrined in the constitution,” he said.

“So,” he continued, “if tomorrow you have questions, you have the right to ask in a peaceful and civilized way. Therefore, if there is anything that is prohibited, it is to try and ask questions and look for answers using force, creating chaos and rebellion and you will pay a price for that.”

Desalegn went on to say the government is undergoing a period of self-examination following the crisis.

“We also have to go through deep rehabilitation similar to what you’ve gone through,” he said. “We need to expand democracy. We have come to the conclusion that we have to allow discussions among the people, especially the youth, listen to their problems and provide solutions.”

Negeri Lencho, Ethiopia’s newly appointed communications minister, said there is a committee investigating whether there were human rights violations during the implementation of the state of emergency. But, he said, it is difficult on the ground because sometimes “emotions” rising during interactions with protesters and security forces “could turn fatal.”

He added that although avoidable, crimes committed during such instances and cases will be assessed by an independent body to bring justice.

“No one is above the law,” he said in an extended interview with VOA Amharic Service.

For more than a year, protesters across the country, including many in the Oromia and Amhara regions, have demanded reforms on issues including land rights and poor governance.

A man attends a prayer session at Biftu Bole Lutheran Church during a prayer and candle ceremony for protesters who died in the town of Bishoftu, in Addis Ababa, Ethiopia, Oct. 16, 2016.

On October 2, an Oromo festival in the town of Bishoftu turned deadly when a clash with security forces and a stampede left dozens dead. More protests followed across the country and the government declared a state of emergency October 9.

Prominent opposition leaders have been arrested since the start of protests, including Merera Gudina, the chairman of the Oromo Federalist Congress (OFC), an opposition party within the country.

Gudina was arrested while returning from abroad for a meeting with members of the European Parliament in Brussels, where he spoke about human rights violations and the political situation of the country.

His lawyer told VOA he is kept in prison by himself and charges against him haven’t been clearly stated. He said it was difficult to openly speak with his client since police monitored their visit.

Twenty-two OFC leaders were arrested in 2015 and are facing terrorism charges under the country’s controversial law used to imprison journalists, dissidents and political opponents.

On a recent trip to Ethiopia, Tom Malinowski, U.S. Assistant Secretary for Democracy, Human Rights and Labor Affairs, urged leaders to open up avenues of democratic expression, closed in recent years, in the interest of economic development. Malinowski said he made a similar argument to government officials during a trip last year.

Malinowski said he fears the ongoing state of emergency and the mass arrests threaten to exacerbate tensions instead of ending them, while giving too much power to security forces.

“Our sense is that the longer this unnatural state continues, the harder it will be for the government to achieve some of the goals that it has acknowledged must be met for the crisis to be resolved,” he said.