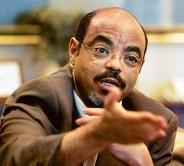 * Claims come a month after Ethiopia raids inside Eritrea

ADDIS ABABA, April 17 (Reuters) – Ethiopian Prime Minister Meles Zenawi accused Eritrea on Tuesday of abducting dozens of Ethiopian miners from the country’s northwest, in a potential escalation of tension between the arch-enemies.

Ethiopian troops crossed into the Red Sea state last month and attacked what they said were military bases used by rebels to stage raids, including a January attack that killed five Western tourists in Ethiopia’s remote Afar region.

These attacks were the first on Eritrean soil that Ethiopia has admitted to since the end of a devastating 1998-2000 border war, sparking concern that their unresolved frontier spat could escalate into a full-scale war.

“They (Eritrean government) recently kidnapped more than 100 young miners who were mining gold in our country’s northwest. And in the northeast, they killed some tourists and kidnapped others,” Meles said, the latter referring to the January raid.

“We have taken proportional measures in both locations,” he told lawmakers in response to a question on relations with Eritrea.

Meles did not specify when and exactly where the abductions in the country’s northwest Tigray region took place, nor the measures his country had subsequently taken.

Eritrean officials were not immediately available for comment, but they often dismiss their rivals’ allegations as a ploy to harm Eritrea’s reputation.

Ethiopia routinely accuses Asmara of supporting Ethiopian separatist groups. It blamed an Afar rebel movement for the kidnapping of Westerners in its northern Afar region in 2007, and again for the attack in the same area earlier this year.

Gunmen killed two Germans, two Hungarians and an Austrian in a dawn attack on a group of tourists in the remote Afar region on January 17, and seized two Germans and two Ethiopians.

A rebel group in the Afar region said in February it had freed the two Germans, although there has been no official confirmation of the release.

After the border war, the Hague-based Eritrea-Ethiopia Boundary Commission ruled that the flashpoint town of Badme belonged to Eritrea but the village remains in the hands of its neighbour, which is calling for negotiations to implement the ruling.

Asmara blames the international community for the impasse, and President Isaias Afewerki last month accused the United States of plotting the Ethiopian raids.

Ethiopia is Washington’s biggest ally in the Horn of Africa region and has deployed troops in lawless Somalia to fight al Qaeda-linked insurgents in Somalia.

“The military incursions were plotted by Washington with the aim of diverting attention from implementing the boundary commission’s decision,” Isaias said in an interview with state television. (Editing by Yara Bayoumy)