Ethiopia on Thursday threatened to take action against Eritrea if the international community remained silent on Asmara's terrorist acts. The warning comes days after several European tourists and Ethiopians were attacked in that country's Afar region, 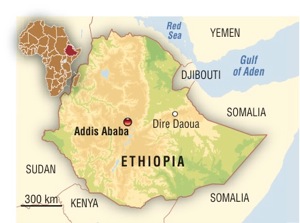 Ethiopia on Thursday threatened to take action against Eritrea if the international community remained silent on Asmara’s terrorist acts.

The warning comes days after several European tourists and Ethiopians were attacked in that country’s Afar region, close to the Eritrean border.

“The Government cannot and should not sit idly by while the regime in Asmara continues to sponsor acts of terror within Ethiopia’s territory with impunity.

“It will be obliged to take whatever action is necessary to stop the activities of the Eritrean regime once and for all unless the international community assumes its responsibilities and takes the necessary steps to bring this abominable behaviour to an end,” the Ethiopian Ministry of Foreign Affairs said in a statement released on Thursday.

Our correspondent in Addis Ababa says that this was the first time in many years that such strong words had been used by Ethiopia since relations between the two countries touched rock bottom following a border dispute, about a decade ago.

The statement said that “Ethiopia has the right to defend itself and will do so if necessary”  whilst warning that “the international community has never been the last line of defense against Eritrea’s destabilizing activities.”

The Horn of Africa country also said that it will do everything possible to have those taken prisoner released as soon as possible.

“The Ethiopian Government believes that it is still not too late for international action,” the statement added.

Monday’s attack, which occurred as 27 international tourists were visiting the lava lakes of the volcanic Afar region, also saw the abduction of two Germans tourists and two Ethiopians (a driver and a policeman).

Ethiopia’s official stance highlights a “direct involvement of the Eritrean Government” in the attacks, arguing that tourists who had been kidnapped by the Eritrean government on previous occasions had been used as a bargaining chip in Asmara’s diplomatic activities.

“There is concern that the people who have been kidnapped might have been taken across the border into Eritrea.”

Five years ago five British and thirteen Ethiopians were abducted from the same region.

Eritrea is under the United Nations sanctions for supporting Al Shabab.

Meanwhile, Ethiopia has warned that the attacks are intended to coincide with the forthcoming African Union Summit in Addis Ababa at the end of the month.

Intermittent border conflicts between the two countries since 1998 have led to a “No peace, No war” situation.