Ethiopia and Eritrea Are Fighting Again

June 17, 2016  •  From theTrumpet.com The geopolitical significance of an age-old rivalry BY CALLUM WOOD Tensions between Ethiopia and Eritrea inflamed once again due to cross-border skirmishes. Agence France-Presse (AFP) said the border battle was one of 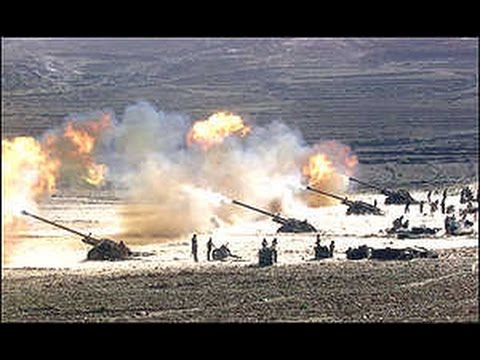 June 17, 2016  •  From theTrumpet.com
The geopolitical significance of an age-old rivalry
BY CALLUM WOOD

Tensions between Ethiopia and Eritrea inflamed once again due to cross-border skirmishes. Agence France-Presse (AFP) said the border battle was one of the “worst clashes since the end of a 1998–2000 border war.”

Each country has blame the other for initiating the bloodshed. “There were significant casualties on both sides,” Ethiopian Information Minister Getachew Reda told AFP, however, an exact count has not been determined.

Eritrea is such a reclusive state that exact details remain hazy. The flare-up has some analysts speculating that the gradually increasing tensions have reached the breaking point. What may come next is a return to the border war.

Eritrea won its independence from Ethiopia in 1991 after a 30-year war. Peace was short lived. From 1998–2000, the two nations waged a major border war; the casualties were estimated to be around 70,000.

Both nations signed the Algiers Peace Agreement in 2000, but their relations have been no more peaceful than the pre-war days.

Ethiopia attacked Eritrean military post in early 2012. Addis Ababa, Ethiopia’s capital, claimed Eritrea was training unnamed “subversive groups” intending to carry out attacks on Ethiopians. The attack could have been an attempt by Ethiopia to further destabilize its neighboring nemesis.

Time for Round Two?

Eritrea has not enjoyed much stability since gaining independence more than two decades ago. A single-party government has implemented of mandatory, indefinite conscription and overseen a wide range of abuses and crimes against humanity.

Conditions are horrific. The government uses the threat of war to justify lifelong servitude from its civilians. Eritreans are not even allowed full freedom of movement within the country. Travel permits and exit visas are required for those traveling outside of and inside Eritrea. Without these permits, Eritreans can be arrested simply for leaving their house! Eritrea even beat North Korea to the bottom of the 2016 World Press Freedom Index. As such, it is hard to know exactly what is happening within the nation’s borders.

One thing that is certain, the atrocities undoubtedly breed discontent. Journalist Dan Connell told Guardian Unlimited that he believes the Eritrean government is likelythe weakest it has ever been, which would explain why a large number of people have been able to escape in recent years.

The United Nations estimates that hundreds of thousands of Eritreans have fled across the Red Sea and Sahara desert.

With the Eritrean government at its weakest since its foundation, Ethiopia may have started the attack as a means to stoke the flames of discontent among Eritrea’s population.

With that said, the first shots could also have been fired by Eritrea. The Eritrean government no doubt feels the simmering insurrection among its population. And a war would distract the people from government crimes.

Either way, the recent skirmish is a foreboding sign of more fighting to come between the age-old rivals.

Why should you be concerned by the border disputes of these two African nations? Despite its poverty-stricken state, Eritrea holds something valuable, it can affectglobal trade: a coastline.

It isn’t just any coastline. Eritrea has over 672 miles of prime Red Sea coast. The little nation has immediate access to the Gulf of Aden and Bab el-Mandeb Strait, one of the world’s busiest sea-lanes. Roughly 15 percent of all maritime trade travels through the Red Sea each year. Approximately 55 ships sail by Eritrea every day.

For now, Eritrea poses little to no threat to those ships, but if it were controlled by a somewhat more dominant power—say Ethiopia or Iran—then Eritrea’s coastline becomes much more geopolitically significant.

I mention Iran for a reason. Tehran has been building relations with Eritrea for years. When the Eritreans publicly supported Iran’s nuclear program in 2009, Tehran wired them $35 million.

Tehran has worked closely with Eritrea to smuggle weapons to Somalia. In 2008, an Eritrean opposition site reported that Iran had off-loaded troops and weapons at Eritrea’s Port of Assab. The troops were allegedly there to train Somalian militants. The report was soon followed by the UN Security Council imposing sanctions against Eritrea in hopes to blunt its radical tendencies.

Iran wants Eritrea in its back pocket. Just looking at a map of the region shows why: Yemen is less than 40 miles from the Port of Assab. Iran is exerting greater influence in Yemen than it has ever wielded in the past. If Iran were able to control both Yemenand Eritrea, it would have Bab el-Mandeb in its grip. Add to that the Strait of Hormuz—already under Iran’s control—and you have a major chokehold on the entire region. At that point, Iran could hold world trade for ransom!

Eritrea is also a great stepping-stone toward Ethiopia. Iran has already used Eritrea to spread Ethiopia terror in North Africa. In November 2011, the Ethiopian government discovered a plot by Wahhabi Muslims within Ethiopia to transform the country into an Islamic nation governed by sharia law. The same month, Kenyan media reported that Eritrea had delivered a shipment of arms to Somalia’s Islamist al-Shabaab movement. Eritrea has also been accused of supporting Islamist groups in Djibouti, Uganda and Sudan, and of providing safe haven for Ethiopian Islamists.

Iran’s desire to spread sharia Islam and exert control in the Middle East and North Africa works perfectly with the hard-line Eritrean government.

The Trumpet has long forecast that Iran would become more heavily involved in Eritrea. Iranian interests thrive in a crisis. Iran has capitalized on violence in Yemen, Syria, Iraq and Libya over the past few years. With an extensive history already established, Eritrea could be next.

Furthermore, the Trumpet has also pointed to prophecies found in Daniel 11, which indicate Ethiopia will eventually be in some form of alliance with Iran. In “Libya and Ethiopia Reveal Iran’s Military Strategy,” Trumpet editor in chief Gerald Flurry wrote:

Whoever heavily influences or controls Ethiopia will undoubtedly also control the small areas of Eritrea and Djibouti on the Red Sea coastline. These areas only recently became independent of Ethiopia. Also, I believe the Bible view is that these small areas are included as a part of Ethiopia.

Skeptics may point to Ethiopia’s current religious demographics as proof that this could never occur, but Daniel 11:43 mentions Ethiopia directly!

The king of the south and the king of the north of Daniel 11:40-45 may appear to be shrouded in mystery, but you can understand their identities! Be sure to read Mr. Flurry’s aforementioned article and request our free booklet The King of the South to help you identify these world-shaping powers and to see how Eritrea and Ethiopia are tied to their rise. ▪