Young people are fleeing at an alarming rate, preferring to face uncertainty in Europe rather than oppression at home, The Conversation reports Eritreans celebrate during the war with neighbouring Ethiopia in 1998. Photograph: Sami Sallinen/AP Valerie Frank

Valerie Frank for the Conversation, part of the Guardian Africa Network

Twenty-five years ago the Eritrean People’s Liberation Front marched into Asmara, sending the Ethiopian forces they had been fighting for 30 years scrambling out of the city to safety.

People were elated. The underdogs had triumphed and the streets were filled with war-wearied citizens, who were free at last.

But this excitement was short-lived. The liberation forces quickly morphed into the People’s Front for Democracy and Justice, a political party that has ruled ever since. It turned Eritrea into one of the most isolated countries and saddled it with the nickname: “Africa’s North Korea”.

Hundreds of young people are fleeing each week, from a country of just 5.1 million, and Eritreans now make up a significant number of those entering Europe on dangerous crossings from Libya. What was once a relatively unknown and underreported country is now at the forefront of the EU’s mind, as it scrabbles for a way to “stem” the movement of people to Europe.

But how did it come to this?

Optimism for Eritrea’s future was high in the 1990s. The Liberation Front’s discipline and impressive achievements in undermining the Ethiopian forces resulted in a strong belief that the new government could produce similar successes.

But the outbreak of the border conflict between Ethiopia and Eritrea in 1998 fundamentally altered the nation’s course. It wreaked devastation around the countries’ shared borders and entrenched Eritrea’s militarisation.

To this day, senior members of the ruling party maintain that the border conflict is still unresolved, and that Eritreans must remain in indefinite national and military service in case of Ethiopian aggression.

This sense of constant threat has been used to legitimise the government’s restrictions on freedom of speech, association, movement and the press. With tens of journalists in jail, many held in secret prisons for decades, the country ranks among the worst in the world for press freedom.

More recently, the UN imposed sanctions on the country over its alleged support for al-Shabaab and refusals to withdraw its troops from Djibouti following an inter-state conflict. Though no recent evidence suggests Eritrea backs the terrorist group, the UN appears reluctant to drop the sanctions until the government permits observers to enter the country.

Restrictions on movement into and around Eritrea makes understanding its conditions extremely difficult. More foreign journalists have visited in recent years, but reports of what is going on inside are largely provided by state-controlled sources, who closely follow the party line. Laudable successes in reducing child mortality, improving maternal health and combating infectious diseases must therefore be viewed with caution.

What we do know is that people are leaving Eritrea at an alarming rate: an estimated 5,000 young people a month.

This is driven by harsh conditions, poor pay across civil and military employment and disproportionate punishment associated with national service, where individuals are condemned to a life of debilitating servitude in the interests of “national security”.

Beyond this, young people feel smothered by the lack of opportunities in the country. Obtaining exit visas to study elsewhere is notoriously difficult even though further education within the country is under-resourced.

Given this rather grim picture of conditions in Eritrea, are there any silver linings?

In the past few years, the Eritrean regime has suggested that it will reduce the length of national service, pay conscripts more and draft a new constitution. As yet there is no evidence of developments on any of these fronts. 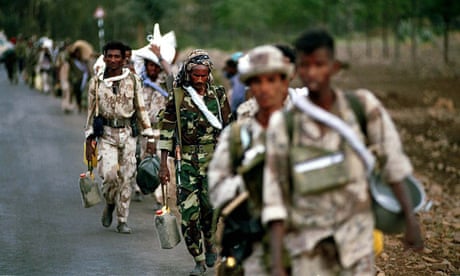 Eritrea’s modernist capital city, Asmara, is edging closer to being givenUnesco World Heritage status in recognition of its unique architectural style. This would provide money for much-needed restoration work and, perhaps, put Eritrea on the tourist map.

But if emigration from the country continues at the current pace, it is hard to imagine where Eritrea will stand in the coming years. Those leaving may provide vital remittances to their families back home, which in 2006 were understood to constitute just under 40% of gross domestic product, but their loss is depriving the country of its youth.

Agitation for political change from those who have left appears to have achieved little, though some insurrection has been documented within the country. 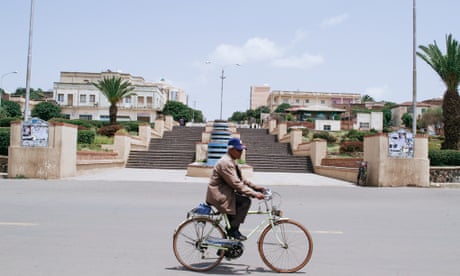 The most notable were the events of Forto 2013, when the country’s Ministry of Information was surrounded by disgruntled soldiers demanding political reform, and the Freedom Friday Movement, which encourages citizens to undermine the government through small, subversive acts.

For now, 25 years after it gained freedom, Eritrea’s political system remains unchanged. It is unclear who or what will follow President Isaias Afewerki, who is 70 years old and unlikely to stand down.

For many of those celebrating 25 years since independence there is thus a heart-breaking truth being simultaneously acknowledged: that the respected fighters who so valiantly won them their freedom after decades in the trenches are so painfully and egregiously failing the next generation now.

Valerie Frank is a pseudonym to protect the identity of the author. A version of this article first appeared on the Conversation