Eritrean Unity with Diversity Workshop December, 29-30, 2013 oakland, Califronia, USA New Year's 2013 ended off on a momentous note with a great concert and during this time, Eritreans from different parts of the United States, Canada and 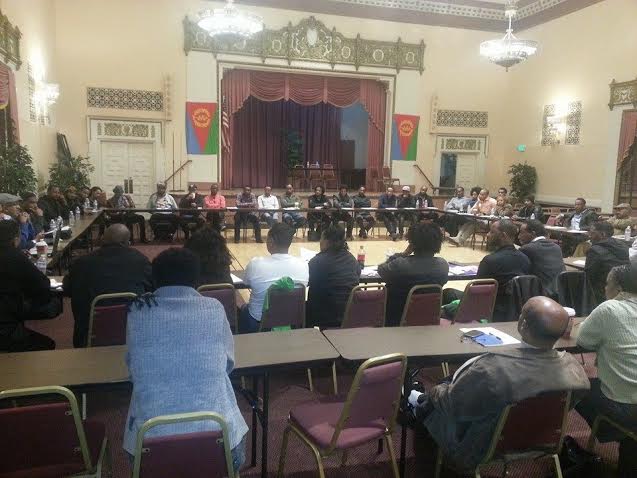 New Year’s 2013 ended off on a momentous note with a great concert and during this time, Eritreans from different parts of the United States, Canada and also West London, decided to use this time to gather at the California Ballroom, Oakland, Califronia to conduct a very unique and successful workshop. The workshop took place on December 29-30, 2013, and was inspired by an initiative from “DELEYTI FITHI”. The workshop agenda and goal was to assess past, present and future political and social aspects of the struggle, in regards to tyranny in Eritrea; and overall political climate within our current movement for change. In this workshop we experimented with a unique approach of sitting in a round table format, face to face, with no formal guest speakers, led by the participants. The structure of the workshop entail moderators whom assisted in  facilitating the discussions; however the floor was open and left for all participants to partake in an open dialogue and open discussion with one another. The participants led discussions created a setting, where each and every individual there felt ownership of every topic that was raised. In turn all issues were discussed in depth by the participants; and analysis of weaknesses and strengths, and potential solutions and recommendations were given by all workshop participants. Ultimately as “DELEYTI FITHI” workshop attendees opened their hearts and minds and heartfelt discussions took place from “DELEYTI FITHI” to “DELEYT FITHI”.

Participation, in the workshop was very diverse and consisted of; adults, youth, women, civic associations, political parties, non-profit organizations, independent activists as well as ordinary individuals. In the beginning of the workshop, first and foremost each and every participant introduced themselves to the workshop attendees; which opened up a respectful and tolerant platform within the workshop.  We noted that it is only when we interact with respect and tolerance; and own such qualities as individuals, that we can create an open platform to discuss and tackle regional, religious, age, gender, political and ideological issues; as well as other various sensitive and important issues in our journey for change and justice. Although workshop participants addressed our differences, weaknesses and strengths, the overall consensus by workshop participants recognized, appreciated and celebrated the concept Unity with Diversity.

Women participation at this event was almost 30%, their vibrant interaction and input was very evident. As such, the role of women and the Eritrean American youth and young adults in general was also discussed in great depth and length and moderated by Women for Change in Eritrea.  It is high time to recognize and encourage woman’s role in our struggle today more than any other time in our past.  Along with our women, Eritrean American youth and young adults and their role in our movement are very crucial and their participation in our current movement must be further addressed not only in words but in action, to reflect our Unity with Diversity.

The issue of social media usage was also addressed during the workshop. It was concluded that by avoiding personal attacks in websites and pal-talk rooms we need to use our energy and time wisely and make concerted effort towards bringing about change in Eritrea and how we can work together in bringing this change in a respectful manner. We must use our social media in a conducive manner, and respect one another, regardless of our ideological, political, religious, regional, age and gender differences; and doing so in a democratic fashion should be the cornerstone of our endeavor for justice.

As change and justice seekers, the overall sentiment during the two day workshop discussions was that what unites us is far more important than what separates and divides us. By focusing on our common goals and uniting in action we can achieve more for our movement for change; especially in the Diaspora, beginning here in the United States. Therefore recommendations were made to begin to work together on a local level here in the United States and create a network with one another throughout North America. Establishing networks on a local level in North America will begin to develop a relationship with one another from city to city and state to state, uniting us in action. Workshop attendees endorsed the idea of local movements to begin the networking phase in North America, ultimately building such entities and creating a network, all across North America uniting us as “DELEYTI FITHI” in action.

Finally, we call upon all individuals serving the tyrant in Eritrea and those who have been silent for various reasons to wake up, stand with Hizbi Eritrea, and say enough is enough and join the movement.  It is when we stand together that we can save our people and our nation.

New Year with new spirit, United in Action with Diversity!